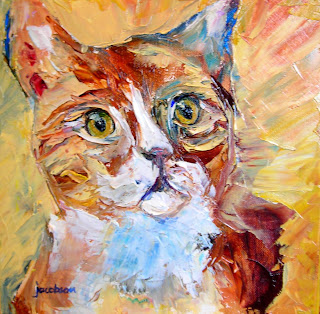 Tiger Cat
Oil on canvas, 12x12. Contact Lori at Center Framing and Art (860-233-7804) for price and delivery options
George Carlin once said that when a cat looks at you, it's like he's testing a new set of eyes. This cat really looked like that in the photo I was working from - and I think that "new eyes" thing comes through in this painting, which I really love.

It's been an interesting and exhilarating week or so for me. My silence on the blog and in emails has happened because my old computer finally died. It was a seven-year-old Mac laptop, much loved, much abused, and very very used. It traveled the country with me twice, took me from one career into another, one place to another, one life to another. When it finally kicked, it was slow and creaky and covered with paint, and I felt quite a kinship to it.

So now I have a new laptop, and it is fast and clean and shiny - but probably not for long.

In the interim, I found that six or seven of my paintings at the Wallkill River School Gallery in Montgomery, N.Y., have sold, including two of the giant cow paintings! This news so stunned and amazed me that I was unable to sleep for one night, and barely able to have a conversation about it all with the curator.

I have to tell you all, though, that since that initial discussion, I have received an email through someone else at the gallery asking first if I would finish the bottoms of the paintings (sure) and second, frighteningly, asking this gallery person what the gallery's refund policy is.

I am not going to panic here. The gallery told me the paintings had sold, and I believe they have sold, and am just going to continue to believe that!

I never thought anyone would buy giant paintings of cows in the first place, but I was wrong. Every cow painting I've made has sold; well, one still hasn't, I think, but the rest have. So what does that say about us? I guess people like cows. I know I do.

Think good thoughts for me, and help me will these sales to fruition.
By carrie jacobson - March 27, 2010