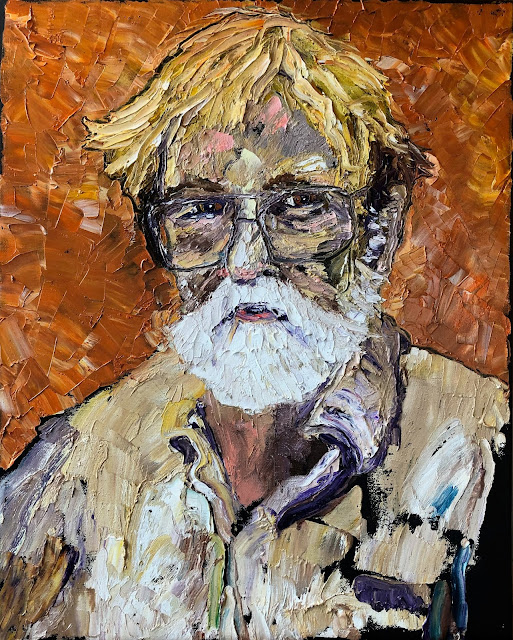 These days stretch out like fog along a gravel road, gray at the top, sharp beneath my feet.

For more than 30 years, it was the two of us together, with a changing retinue of dogs and cats. Always, there was my dear Erika, but usually at a distance.

It was Peter and me, in Westerly, in Portsmouth, in Idaho, in Maine, in Paris and Madrid and the Basque Pyrenees. It was him and me in Connecticut and Maryland and New York state and here on the Eastern Shore.

It was the two of us camping on the Big Hole River, fishing Kelly Creek and Silver Creek, skiing together at Bogus Basin, walking the woods in Bolster's Mills, swimming in the Neversink River, driving through western Canada, climbing to the top of a mountain in Lake Louise with our little dog, Gus. When we got to the top and were told Gus couldn't sit on the patio of the mountaintop restaurant with us, we turned around and hiked back down.

It was the two of us, together, complete. It was enough. We had friends, and we have family we love, but he made my world.

And now he is gone.

He is not coming back. There is no more "us." No more turning to him and asking, "Do you remember when we...?" No more, "Look at what I saw today!" knowing it would make him smile.

I made the painting of him a few days ago. When I was in New Mexico in the spring, I bought a set of pigments from a guy who mines the minerals and then crushes them into pigment. I'd been saving them for something special.

We are holding a memorial celebration for Peter on Saturday, Nov. 23, in Westerly, RI. I will paste the notice in below. You are welcome to attend. If you can't, maybe you can put a Hawaiian shirt on on that day, even over another shirt. If you want to read about his life, you may click here to get to his obituary, on jacobson-arts.com

PLEASE JOIN US at the Calabrese Club on Saturday, Nov. 23, to celebrate the rich, art-filled and too-short life of Peter Richard Jacobson, who died Oct. 10. The club is located at 28 Pleasant St., Westerly, RI.

The celebration will take place from 2 p.m. to 5 p.m. Please come prepared to share stories and memories about Peter. And if you have or can get a Hawaiian shirt, please wear one. They were his favorite. 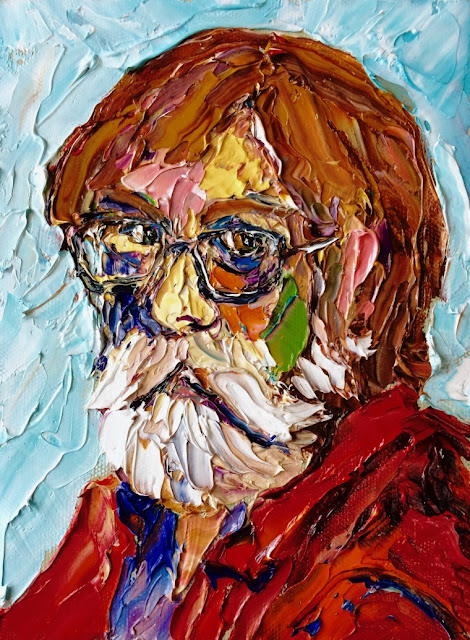 He had come home Sunday from more than three weeks in Rhode Island, where he went to a Chariho High School reunion and spent great, loving, wonderful time with our daughter, Erika, her husband Paul and their youngest, Ashton.

If you knew Peter, you know what a triumph this trip was. A homebody bordering on hermit, he had terrible anxiety around travel. Going to the store, or even Virginia Beach or Salisbury -  90 minutes away, each - that was OK. But going away - away-away - that was hard for him. Very hard.

Armed with a brand-new iPhone, which he had reluctantly agreed to, after years of dismissing the idea, and had then totally fallen in love with - he set out in September for the land of his youth.

I was stunned to hear that he was interested in his high school reunion, but I didn't tease him or question it. That he was going, and possibly for an extended time, this was an achievements I celebrated - and he did, too.

He had a great time at the reunion, and a grand time with Erika, Paul and Ashton. He did a lot of cooking for them, and they sat on the front porch every evening and talked and laughed into the night. He called me from the porch and told me how much fun he was having, and again and again how proud he was of our daughter, who is in a great marriage, has earned her RN degree, has a job she loves and a fine house.

Peter reconnected with the Westerly area, too, in a way I thought he never would. He grew up there, and we met there and had our first home there, but he had been singularly dismayed with the building and development and crowding and commercialization that had occurred there over the years. He'd sworn that he'd never go back, at least not to live, and not to visit, if he could help it.

But he was so enchanted this trip that while he was there, we talked about finding a way to live there for part of the year, or even, maybe, move there. He saw old friends, visited places he had loved, and hunted for arrowheads for hours and hours many days.

And then he came home, and he was happy to be here, in our quiet little town. He told me how much he loves it here, and we talked about all the differences between Westerly and Wachapreague, and again talked about the possibility of finding a way to spend part of the year up there, in that place, yes, but more, with Erika and her family.

He had been having terrible back pain, starting between his shoulder blades and radiating out. It had been going on for four or five days by the time he got home. It seemed to ease up, but then kicked in again on Tuesday.

We went to the Rural Health clinic on Wednesday. His blood pressure was elevated but not dramatically, or at least, that's what they said. They gave him medicine for his chest cold and coughing, and for pain, and sent us home.

Around midnight, I woke up to a crash coming from the living room. He was on the couch, pale and clammy, holding his chest and arching his back. He told me to call 911 and I did, and stayed with him for what felt like hours until the ambulance arrived. They put him on oxygen and before they wheeled him out, I kissed him and told him I loved him and that it would be OK.

It wasn't. He had a cardiac arrest in the ambulance, and honestly, I believe that's when he died. Between here and our hospital. They were doing chest compressions when the ambulance doors opened. They put him on a ventilator, and got him back. Our hospital has one cardiologist, and no cardiac facilities. He came in, and said he thought Peter was stable enough to get to the hospital in Salisbury, which does have cardiac capabilities.

It was too windy for a helicopter, so we waited for the ambulance with the ventilator. Ninety minutes to Salisbury. Thirty in the ER. Then up to ICU, where he arrested again. They revived him - Erika and Paul were on their way.

I knew there was no hope. When they arrived, we spent a few hours with him, then disconnected the life support systems and let him go.

He died long, long, long before he should have. He had plans, and projects and ideas. He was vigorous, interested in life, discovering new things, new likes and hobbies. I know he wasn't ready.

And I am not ready. I am broken, lost, lonely and sadder than I could ever have thought possible. A friend of mine reminded me that I once told him that Peter completed me - and he did. He was my love, my soulmate, my very best friend. Everything I did, I have realized, I did to make him happy - because making him happy was what made me happy.

When I made a painting, I showed it to him first - hoping for delight and enthusiasm, or for a critique that would help me improve it. I made very few paintings that he didn't see before anyone. He was my audience, my target, the person for whom I painted.

The meals I cooked, I cooked because I knew they would please him. I found things and bought things and took pictures of things - all to amuse him or engage him or interest his sharp and active mind and imagination.

I don't know how to live without him, I just don't.

Today, it's finally gray and cold and horrible and rainy. Today the world matches my soul. These days since he died have been beautiful and warm and sunny, the kind of day in which we'd take a break from whatever we were doing, and sit in our quiet back yard and talk and watch the dogs, and he'd say, "Aahhh. This is why we live here."

A few months ago, as I was driving back from some show or painting trip, I realized that I absolutely loved my life. That it could not be better, could not be more perfect. I doubt I'll ever be able to say that again. I wake up each morning, and my first thought is, "Another day without Peter." And I weep.