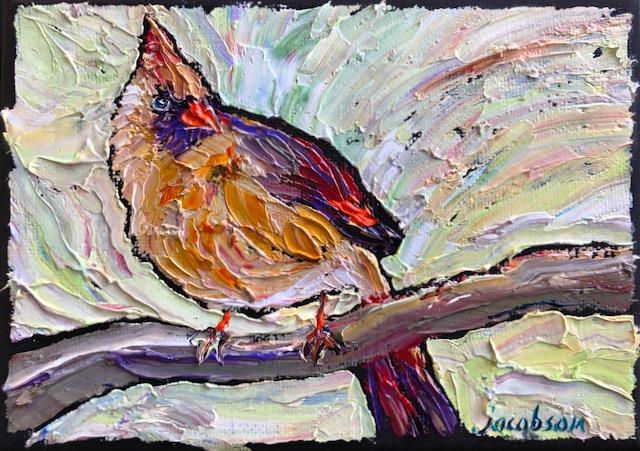 I'M UP BY 5, usually, and I sit here at the kitchen table, next to an east-facing window, and I write, and wait for the sky to lighten. There have been mornings, many of them this year, in which it seemed that, for sure, the sun would not come up. The night would stretch out farther and farther, and I would look at the clock and the sky again and again and wonder if today would be the day. And then, of course, the sky would lighten, and the world would be set right again.

I like the time change, the earlier dawns, and even the earlier dusks. Right after Peter died, the days could not end early enough for me, and even now, there are many days in which I welcome the darkness, and I close the curtains and feel safe and shut in, and glad that the day is over.

Here in Wachapreague, sunset starts to come later on Dec. 7. It is by seconds at first, two seconds, then five, then 12, incremental, unnoticeable, largely unnoticed. Sunrise, however, continues to come later - by large parts of minutes - until Jan. 7.

So I will look out the window, those early January days, and surely, on one or two of them, I will wonder - is it today? 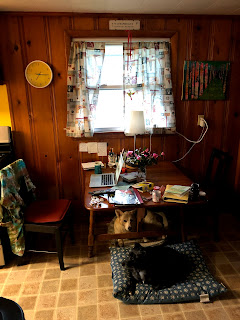 My seat at the table. Koko is underneath, and Doc on the bed in the front.

"One can have no smaller or greater mastery than mastery of oneself." 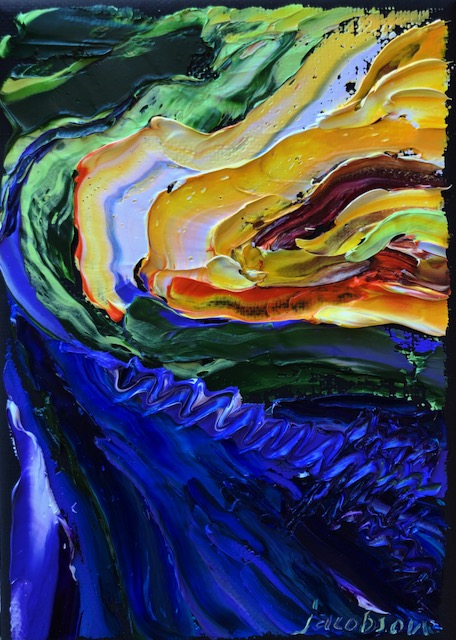 (please email me at carrieBjacobson@gmail.com, if the button doesn't seem to work)
PETER AND I watched "Jeopardy!" pretty much every night for pretty much all of the 31 years we were married. Peter had a fantastic memory, and an incredibly wide range of knowledge. History, geography, science, Vikings, religion, politics, dogs, cars, photography, inventors, he knew it. I sometimes thought that if he had realized how little I actually know - like, where IS Paraguay? Is Trinidad and Tobago one country or two? And on and on - he'd never have married me.
My knowledge, scant though it is, filled in some of his deficits. I am very good with vocabulary, spelling and grammar. I'm fairly good with knowing writers and artists and their work. And that's about it.
When it came to popular culture ("popular" being a relative term, in our house), we were total losers. I still am.
We played "Jeopardy!" every night, always taping it so we could skip over the commercials. Some time in the past 10 years or so, we devised a fun way to play the final question. The show always gives you the category, then goes to a commercial. So we would stop the tape and, before we found out the clue, we would guess the answer. Then we'd start the tape and watch the outcome.
For instance, Friday's category was Fairy Tales. So I'd have guessed Cinderella, and he'd have guessed Thumbelina.
We'd have stopped the tape and made our guesses before we heard the clue, which was this: "In French, this fairy tale character is La Petite Poucette, in Spanish, Paulgarcity and in English, this."
Turns out the answer was "Who is Thumbelina?" So I would have been wrong with Cinderella, but he would have been right.
Usually, of course, we were wrong. But we would get the right answer once or twice a month, and it was always thrilling. It always made us laugh. One time, we got three in a row!
Of course, there's a knack for getting the right answer. You have to be able to make a question about it, for starters. It has to be difficult but not impossible to get the answer. Those two concepts really narrow the field. But still, it's hard. And ridiculously fun - or at least it was for us.
I always thought, and still do, that the show should make this way of playing Final Jeopardy! an option. If you chose it and you won, you could triple your wager. If you chose it and missed, you'd lose everything.
Well. I have not been able to watch "Jeopardy!" since Peter died. And now that Alex Trebec has died, I probably will never watch it again. It makes me sad to know that cancer finally, inevitably, got him. But it is helps me to think of Peter and Alex being together in Heaven, trading answers and questions. And Final Jeopardy guesses.
***
Coda
Nothing Is Far
Though I have never caught the word
of God from any calling bird,
I hear all that the ancients heard.
Though I have seen no deity
Enter or leave a twilit tree,
I see all that the seers see.
A common stone can still reveal
Something not stone, not seen, yet real.
What may a common stone conceal?
Nothing is far that once was near.
Nothing is hid that once was clear.
Nothing was God that is not here.
Here is the bird, the tree, the stone.
Here in the sun I sit alone
Between the known and the unknown.
- Robert Francis 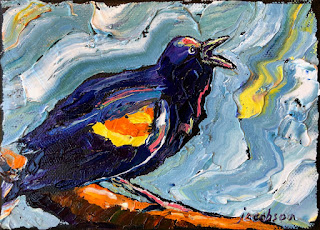 WHEN PETER DIED, I lost more than my husband, my partner, my best friend. I have a terrible memory, and Peter had a great one. He could remember the phone numbers of every place we lived. He remembered people from decades ago and what we had for supper last Thursday.

I could turn to him and ask, "Do you remember that movie with that actress who was in that golf movie and that other guy who played James Bond?" and he would say, "Oh, sure, the 'Thomas Crown Affair.'"

Usually, by the time I realized that I couldn't remember the name of anyone in the movie, let alone the movie's title, I'd have forgotten whatever it was I wanted to tell him about it. But sometimes I'd remember. And, bless him, he never even teased me about my terrible memory.

And if I've already written about this, well, see the paragraphs above. 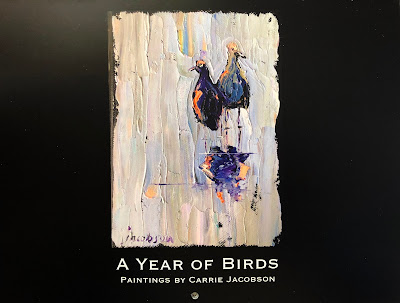 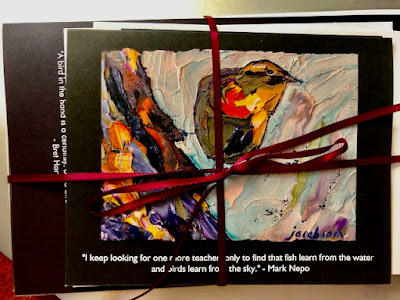 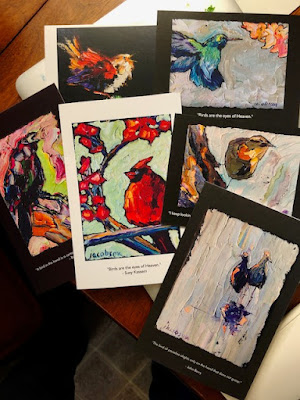 THE BIRD CARDS AND CALENDARS are going fast! The calendars are $20 plus $2 shipping. Cards (with envelopes) are six to a pack - three vertical, three horizontal. They're blank inside, and have a bird-related quote on the front. They are $10 per pack, plus $2 shipping. Please email me at carrieBjacobson@gmail.com if you want some. I have to say, they came out pretty great!
***
Coda
"If you have a talent, use it in every which way possible. Do not hoard it. Do not dole it out like a miser. Spend it lavishly like a millionaire intent on going broke."
- Brenda Francis
By carrie jacobson - November 04, 2020 No comments: 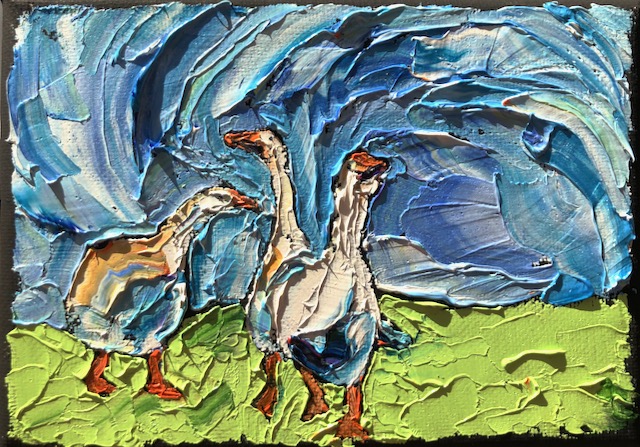 (If you want this painting and the button doesn't work, you can email me or paypal me at carrieBjacobson@gmail.com, and I will mark this painting "sold"! Someone might have gotten there before you, or the PayPal button might just not be working.)

EVERY MORNING, the dogs greet me with delight and unabashed celebration, licking and kissing me, wagging, rolling around on the bed. Doing dog stuff.

I realized this week, that that morning greeting includes sneezing! Every day, all four dogs sneeze at least once every morning. What a lovely way to start the day. Wish human waking involved a good daily sneeze.

I TRIED TO EXPLAIN the time change to the dogs this week, and they did not understand. In fact, it made me realize that I truly don't understand why we still do this.

DOC AND I started dog school last week. My hope is that Doc will learn that while he's on a leash, he shouldn't lunge, barking and snarling, at golf carts, trucks with trailers,  other dogs, or humans holding things in their hands. He seems to be making progress.

One primary notion of dog school is that I must and can stop him from practicing the behaviors that I don't like. Mostly, this has to do with distracting him with food and positive feedback. I think this concept is entirely applicable to me and my own life, though maybe less with the food and more with the positive feedback. 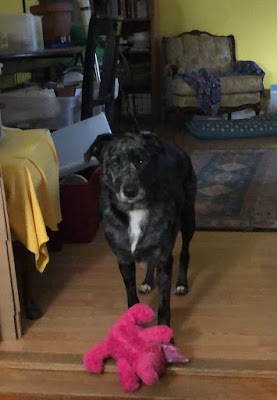 Doc, bringing me a toy one morning when I was sad.
***
Coda
"Dogs do speak, but only to those who know how to listen."
- Orhan Pamuk 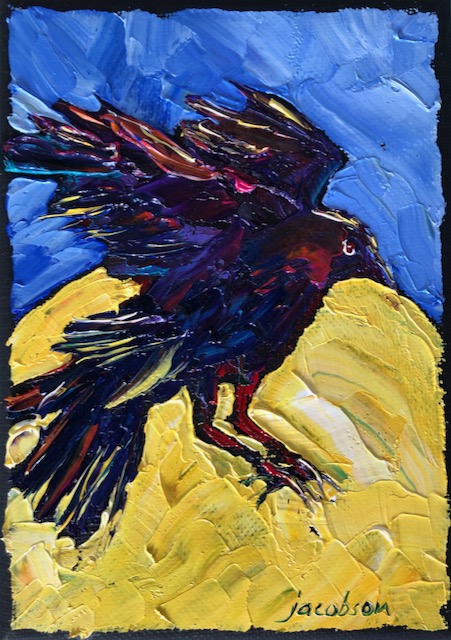 THE ONE GOOD THING that I can say about the covid is that it made Halloween easier for me.
It was Peter's favorite holiday, by a mile. He died last year on Oct. 10, so close to Halloween that I didn't even consider participating. Without the covid, I'd have had to think about it this year, and I am still not ready for that.
Every year, we decorated for Halloween. With the help of our daughter, who often gave Peter Halloween decorations for Christmas, we amassed a pretty interesting collection, including a toaster with a skeleton hand that pops up when someone walks by; a suitcase with a glowing skull inside that lights up when people come near; and a variety of skeletons, including skeleton humans walking skeleton dogs; and a family of skeleton mice, one of which spent an entire year on a branch of a dogwood in the front yard.
Peter himself dressed up on Halloween, and took great pleasure in scaring the kids, though he made sure to be gentle and sweet with the wee ones. He also bought all the candy, inevitably three times as much as we could ever give away. He ate it until Easter, most years, loving every calorie.
I was often away on painting trips in October, and Peter would spend the month taping and watching all the scary movies he could find. I'd come home in time for Halloween to find the DVR filled with horror movies.
I don't know if I will ever truly enjoy Halloween again. I hope I will. I know I'll never enjoy it in the same way, but that goes for so very much now. I am thankful that, because of the covid, I didn't have to decide anything. And I am thankful that I have the memories of so many Halloweens with someone who loved it so very much.
***
Coda
"The person born with a talent they are meant to use will find their greatest happiness in using it."
- Johann Wolfgang Von Goethe
By carrie jacobson - November 02, 2020 No comments: