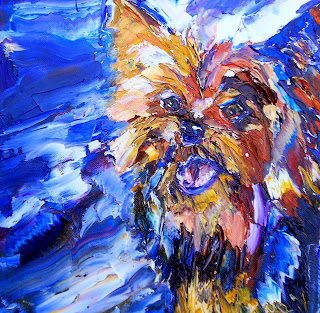 Yorkie
Oil on canvas, 12x12
Contact Lori at Center Framing & Art, 860-233-7804, for price and delivery options
A few days ago, I did something that would have made my mother proud. I waged war on a creeping juniper, and I won.

This thing was about 10 feet long and 8 feet wide. Its main root was (and still is, actually, as I couldn't get it out) the size of my wrist. The shrub, true to its name, had crept along most of a prime, full-sun garden bed at the side of our house, and then had spewed itself out into the yard.

It was fat, and healthy, and happy as could be - and I couldn't stand it.

I pulled and chopped and dug and yanked. I lurched and tugged. I used all my muscles, all my weight, all my dogged determination. And when I thought I must fail, I brought in the heavy artillery: Memories of my mother, pruning the wegelia.

My mother had a particular passion for pruning, and especially for pruning the wegelia, a row of graceful, pink-flowered bushes that lined one edge of our driveway.

Annually, she would wage war on these bushes, hacking away at anything she deemed superfluous.

There was a lot that she deemed superfluous.

Every year, she'd be out there for days, cutting and chopping and shaping and pruning, heaping discarded branches into piles and them hauling them to the street for the trash men to take. When she was done with the wegelia, she'd start on the lilacs, or the rhododendrons, or the raspberries, or any other bush that seemed to be getting the upper hand.

She was relentless, dogged, unstoppable.

So I thought of Mom, and I waged war.

I hauled eight wheelbarrow loads of creeping juniper into the woods. Eight!

Soon, I will enlarge the newly revealed garden (it's lined with beautiful cobblestones, surprise!) and transplant my roses. I hated killing that healthy plant, but I think there's always a little collateral damage when it comes to gardening.
By carrie jacobson - May 04, 2010

I loved reading about your courageous battle with the creeping juniper!! Thank you Carrie for your post on PKP. I love your newest April painting - I really do feel Spring when I see it! I am loving your dogs portraits too. You've captured their essence.
Happy Painting,
Judy