Mama Cardinal - and Thoughts on Painting with a Palette Knife 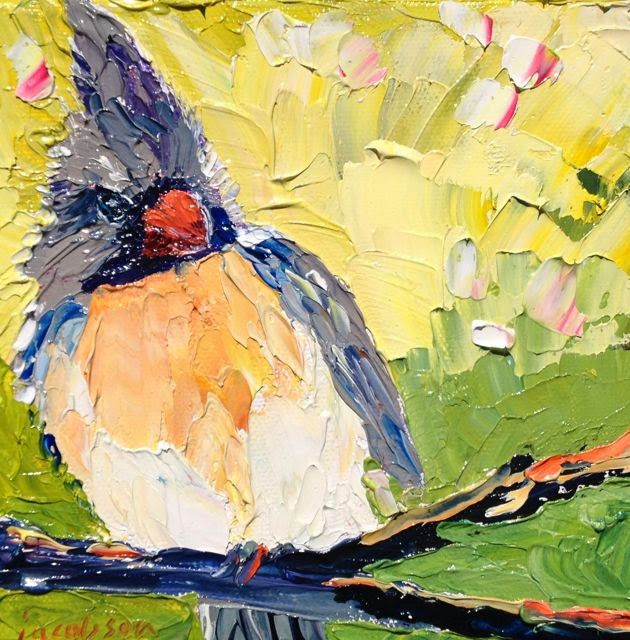 Painting with a palette knife, I am realizing, involves an entirely different mindset and approach than painting with a brush. This has become more clear to me recently, as I've done workshops with a number of painters who use brushes and want to learn the knife.

With a palette knife, or at least the way I paint, the art happens one distinct stroke at a time. When I am at my best, and my painting is at its best, I make a mark and I leave it alone. I don't go over it, I don't change it, I don't touch it, once I put it on the canvas.

This is absolutely antithetical to the way most folks paint. When you're using a brush, you can go over and over the paint. You can sort of scrub the paint, softening the edges, blurring and blending and changing by degrees. It is very, very hard for a person who paints with a brush to stop going over the paint, again and again and again.

For me, most of the work is done before I touch the knife to the canvas. I mix the paint on my palette, I pick up the colors I want, I make the stroke and then I leave it. Wipe off my palette knife and go on to the next stroke. In many paintings, sunflowers most of all,  I find, I mix the paint stroke by stroke - in other words, each petal, each part of each petal, is a different combination of colors, a different bit of paint. The background, I mix in larger batches, but those flowers are bit by bit by bit.

And believe me, it's really, really hard NOT to go over the strokes! But every time you do, it muddies the painting and dulls the paint. 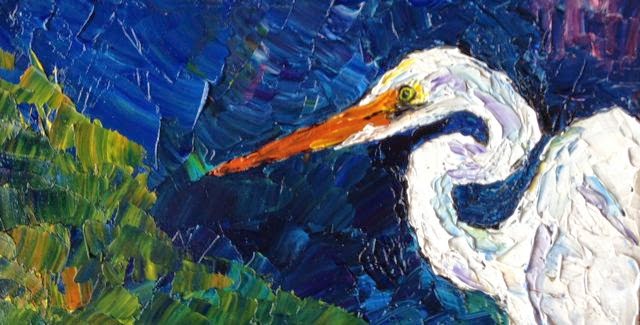 
ANOTHER THING I've been thinking, while I've been making these small paintings for the Denison Pequotsepos Nature Center show, that runs in June at the Center in Mystic, CT, is how great it would be to do shows with only - or mostly - teeny paintings.

There was a guy across the aisle from me in Chattanooga who had mostly tiny paintings, all of strange, cartoon-like characters. He sold these for what I thought was too much money - $145 for a 6-inch-square painting, and up from there. Of course, I haven't done the math, but perhaps that's what you have to charge to make a living selling tiny paintings.

And clearly, before I fantasize too much about showing up for a show in a Prius or a Mini Cooper, I should sit down and do some multiplication. I can say that it would be such FUN to have a tent with mostly all teeny stuff. And it would be miles easier than lugging 48x60-inch paintings - though I DO love to paint them... 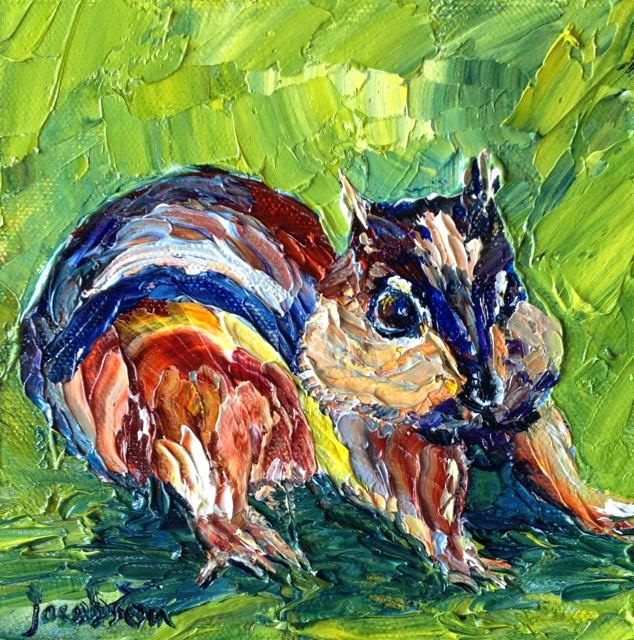 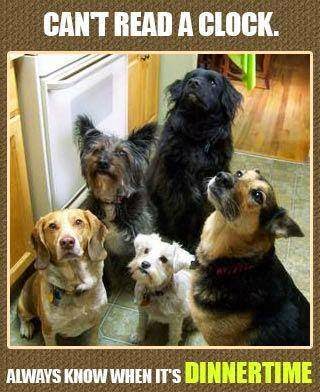 maybe you could have both large and small at your shows? The younger market might not be able to afford larger pieces...the older market might have their walls filled,but still might have room to tuck a small painting somewhere.

Yes, that's what makes sense. And that's why I started these small pieces in the first place. But I am having so much fun painting them! That's me - I think "More" is my favorite word...

thanks! I am having a great time painting birds. I have plans for a kingfisher next.