The arc at Noah's 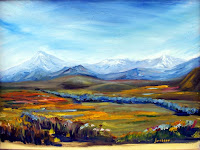 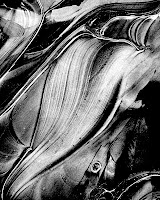 Left, one of Peter's ice photographs. Above, the mountains outside of Wisdom, Montana.

Yesterday, Peter and I met Trowbridge Cottrell at Noah's in Stonington Borough. By afternoon, the show was shaping up.

We found that Trowbridge had a wonderful sense of our separate arts and how they worked together - a better sense, truly, than either of us has developed. Of course, my stuff has been on the walls and Peter's in the computer, so until yesterday, we really didn't have the chance to see our pieces side by side.

We'd said we believed they'd work together, but there had been a tiny worry in my head that they wouldn't. His photographs are so abstract, so black and white. My paintings are so colorful, so varied in tone and value and hue, I really didn't know.

But Trowbridge found remarkable similarities of composition and form, of rhythm and meaning and made them work.

We ended up with 30 pieces, 12 of Peter's and 18 of mine. This is far more than I'd imagined we would have. The walls are bigger, the lighting better and the whole process more involved than I had ever imagined.

There's no opening at Noah's, nothing formal. The three of us toasted, with sparkling cider. A few Stonington residents wandered in, looking for the first-Monday-of-the-month party. They were disappointed when we told them there wasn't one, but they looked at the art and oohed and aahed.

It's Trowbridge's final show at Noah's, and that's sort of sad. But we gave him work that made him happy, and priced it so it should sell.

He had the reaction to Peter's work that most people have had. In short, they are stunned by it. No one has ever seen anything like it. I think he's making something truly special, truly different. I think I have a future as a painter, yes. But I think he has a spectacular future awaiting him. I see his stuff in the big galleries in the big cities. I see him changing the face of photography. And I couldn't be happier. As long as I don't have to go back to journalism, as long as I get to paint, I don't care who makes the money, who makes it big.

You have been given the
Premio Dardos Award by
gmComicz at An Artistic View. at http://www.gmcomicz.blogspot.com
Check it out!