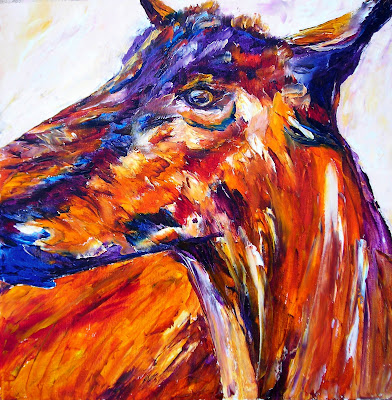 It was a wet May day, and Jill Blanchette (a wonderful painter and old friend; see her work here) took me up on my invitation to go painting in the Kinney Azalea Garden in West Kingston, R.I.

Off we went, and painted the gorgeous garden, color-splashed and saturated to an even brighter pitch by the drizzly day. Afterwards, we drove through backwoods Rhode Island, and in time, came upon a farm where goats were stomping around in a field.

We stopped, and I took photos, and in time, a woman came out and introduced us to some of the goats. They are odd creatures! I've always liked them, with their soft noses and strange eyes. I had fun painting this guy.

On another note, Robert Parker has died, the television news said this morning. A prolific mystery writer, Parker was a teacher at Northeastern University when I was there. I took a creative writing class from him. It consisted of us going in on the first day and meeting the already famous writer. He told us to write at least 40 pages, and show up at the end of the semester with it. If we wanted help, we could check with him during office hours, though he probably wouldn't be there.

He smoked the whole time. We all did.

I wrote him a novella. He gave me an A+, said I was the best writer he'd ever had, and eventually introduced me (briefly) to Stephen King. I'd bet money that that A+ and the accolade were not rare gifts from him.

He was a tough, gruff, likable man. I've loved reading his novels and his nonfiction. It's a poorer world without him.