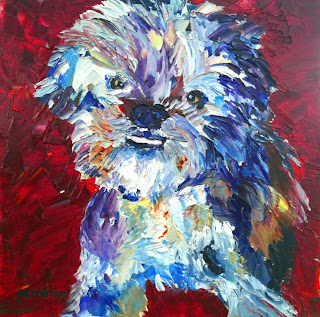 Buttons
Oil on canvas, 12x12
To say that Heather and I laughed our way through Canada would be putting it mildly. Things struck us, again and again, as simply and utterly hilarious, and we laughed so hard at times that it was hard to see.

One night, we got to the metropolis of Margaree Forks moments after the grocery store closed. There were no restaurants in town, and the one hotel, run by a gregarious German named Werner, had no working restaurant. Werner informed us that if we drove to Northeast Margaree (he made this sound like it was just down the road, when in fact, it was about 40 miles away), we might be able to get a pizza at the gas station.

Well, the pizza was all gone, but there was ice cream, so we had ice cream for dinner. But when we'd driven the 40 miles back to Auberge Werner, we found that we were still hungry.

In the van, we had cheese, and we had bread, and we had Cheez Whiz and so we slapped together a couple of cheese-and-Cheez-Whiz sandwiches.

This meal was so utterly ridiculous that the very notion of it sent us into gales of laughter... and midway, a couple bites into our delicious sandwiches, we found ourselves staring into the cutest little dog face you'd ever want to see. It was Buttons, and at the other end of the leash, Wanda.

Wanda, hearing our laughter and our stupid story, took pity on us, left Buttons with us for a few moments (OK, I begged), and came back with muffins. What a dear.

On our route home, we looked up Wanda and her husband in Schubenacadie, Nova Scotia, (this town is pronounced shoe-ben-ACK-a-dee, and it's really fun to say), but neither they, nor Buttons, was home. Maybe next time!
By carrie jacobson - September 07, 2010

Email ThisBlogThis!Share to TwitterShare to FacebookShare to Pinterest
Labels: Buttons