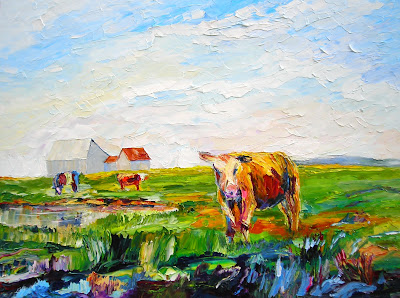 It was a gray, drizzly day, and Heather and I were on West Mabou Road on Cape Breton Island, waiting for the fog to lift.

We had an invitation, she said, to visit him - in five minutes (why? To give him time to get the plastic blow-up doll off the couch and into the closet?). He wanted us to see some newspaper stories about the crop circles he'd mowed one summer on his land.

It did occur to me, as we were walking in his front door five minutes later, that maybe this wasn't a great idea, going into a strange man's house. But Heather and I could have taken this guy, and mostly, my guess was, the major danger was that we'd be talked to death by this guy.

This guy's house was awful. Just awful. It was a beautiful house - or had been, when his grandparents had built it. Had been, I'm sure, when his parents had lived in it and brought him up. Now was a different story.  He had had a wife, and his wife had left him, and Heather and I figured that he hadn't cleaned, or swept, or washed a dish, since. We never found out when she'd left, but it must have been a few years ago.

We read the stories, looked at the pictures, oohed and aahed and then got the heck out of there. To this day, I am thankful that we got out before he opened that rusty refrigerator.

These cows in this cowscape? They're his.
By carrie jacobson - September 27, 2010

Oh dear - you're right about having some thoughts about entering a stranger's home - OMG what if there were.....like....body parts in the fridge...
And then again, who knows - you and Heather might have given him a great day listening to a lonely man's stories.
Happy painting,
J

Hi,how are you today?I have surfed your blog serveral times, your blog is great and having a lot of intresting things. If you have time, you can visit my blog and feel free to give me some comment, more important thing is being my follower! Thank you very much.