A Green Thought - and a Nice Southern City

A Green Thought
Oil on canvas, 10x30
sold!
One night this summer, I went to dinner with a friend of my brother's, who I had met a few times but didn't know well.

We went to a lovely restaurant in Elizabeth Park in West Hartford, and we had a great time, talking about life and hopes and goals and how to reach them. She inspired me and refreshed me - and I needed it. I'd done a series of shows in Connecticut, and they had been good, but hot and exhausting, and I was flat-out tired. But our conversation, and our lovely treat of a supper on a cool outdoor patio gave me the zest I needed to paint and get ready for the final Connecticut shows with vigor and enthusiasm.

As we were leaving the restaurant, I took a photo of a large planter outside the restaurant. "A Green Thought" is my painting of that planter, and that cool and refreshing evening. 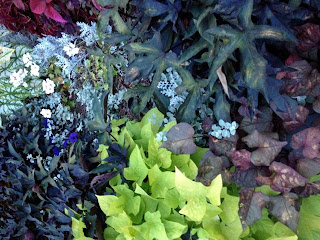 ***
MY HEAD HAS been full the past week in Wachapreague, and I finally realized why. I went by this house, and rolled down the window of the car to take photos of this white stuff climbing in lacy handfuls over everything, and WHAM! my head filled up, just like that.

The stuff is called autumn clematis, according to my friend and native Wachapreagian Pat. It makes my head a balloon, but it has a rich, sweet fragrance, and it sure is pretty. 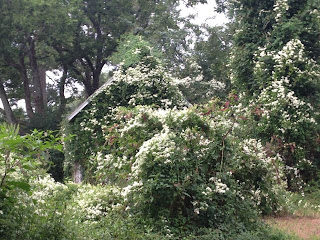 ***
IF I EVER wanted to live in a city again - and I think that 10 years in Boston was probably plenty of city living for me - but if I ever did, Charlotte would not be a bad choice. It's filled with art, cool buildings, good restaurants, wide ethnic diversity, a football team with a downtown stadium - and no snow.

A Panthers game was starting as I drove through the city tonight, and it made me think of being in downtown Boston when the Red Sox were playing at Fenway. Both stadiums are right downtown, and the excitement of a big crowd going to a big game on a warm night is very contagious and appealing. 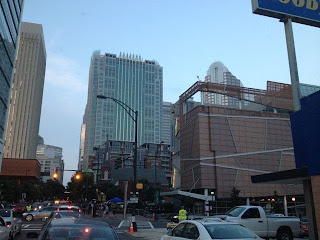 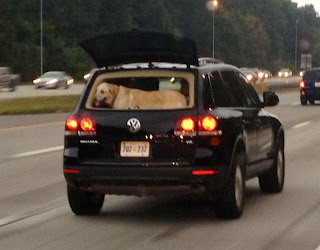 He was loving it!