Farm on the Hill - and a Story with a Great Ending 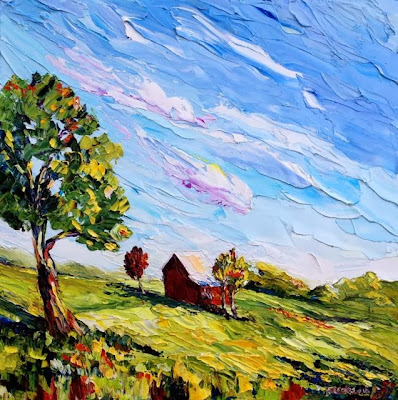 Farm on the Hill
Oil on canvas, 20x20
Commission

Yesterday, Peter and I went to the vegetable stand where he got the hnngghhh! the other day, and we bought some more, since they had been so delicious.

It was a windy, rainy afternoon, not cold but not pleasant at all. As we were buying stuff, I heard a teeny little squeak, and saw a kitten dart beneath our van. The guy we were buying the veggies from said it had been around all day, and needed to go home with someone.

The vegetable stand is on Route 13, at a very busy intersection on that very busy road. The kitten was about the size of a small apple, and was clearly terrified and also pretty clearly starving.

We do not need another animal. We have six dogs and two cats already, and that's more than enough. But I couldn't leave that little thing there to get run over on the highway. So I got down on my hands and knees in the wet gravel, and scooted around until I could grab it, and off we went.

We stopped at the grocery store, got some food and a disposable litter box, and set off for home.

The kitten was more than a little cowed by the dogs - who wouldn't be? Here's this tiny thing, amid a pack of what must be (to cat senses) slavering, stinky, terrifying creatures with enormous teeth and huge mouths.

But she held her own, and the dogs, for the most part, became disinterested, after an initial flurry of excitement.

Still. We really don't want or need another animal.

Today, a friend and patron showed up at the back door with two friends of his. Peter was feeding the dogs. The kitten was locked in a carrier. The dogs were barking and howling and trying to get at the kitten, and at the strangers, all the time wanting to get at their own dinner. It was chaos, utter chaos.

I managed to get out the door.

"Yes!" said one of my friend's friends.

Turns out, her own cat had died, suddenly, just last week. I brought her in, and she and the kitten hit it off right away. So at the end of the weekend, the little kitty will head to Northern Virginia, where she will be treated like a queen.

It just doesn't get much better than that, does it? 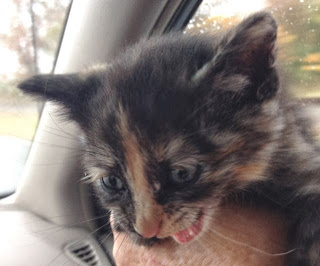 Here's the little kitty, who deserves the high honor of being... Dog of the Day!