Seashore of the Mind
sold

A month or so ago, when the fabulous painter Ronet Noe and I were painting at Center Framing and Art in West Hartford Center, CT, I brought with me an old painting, "Hurricane Waves," that I love and which had never sold.

Well, that's not exactly true. The painting HAD sold, but had been returned to me.

Here's the story: A few years ago, a big hurricane threatened the New England coast, but ended up swirling around well offshore.

Even so, it stirred up HUGE waves. Peter and I went to the beach at Westerly, RI, to watch it. I made several paintings, made them very quickly, standing on the beach, holding onto the canvases so they wouldn't blow away.

The paintings were full of life and energy and vigor, and the excitement of the storm. I loved them!

Back at home, I set them down flat on the deck to photograph them.

Peter opened the door and the dogs came charging out, and one of them, the blind Samoyed, stomped across all the paintings.

I was able to fix them all - but the even left dog hair in the paint of all the pieces. I saw it, but I left it. There is dog hair in many of my paintings.

The person who bought this one returned it, asking if I could take the paint off, and the dog hair out, and repaint it. I politely said no, and returned his money.

I brought this painting to show after show after show, and no one bought it. In fact, no one really saw it, which is an odd occurrence I've noticed... at some shows, some paintings are virtually invisible - even if they are huge.

But that afternoon in October, outside of Center Framing & Art, the painting sold. I was holding it for the buyer, and throughout the afternoon, person after person tried to buy it from me. Go figure, right?

One was a friend and collector, whose mother liked the painting so much that my friend commissioned me to repaint it. I had such a good time with the painting (the top one) that I painted another wave (the bottom one), and this is the one my friend's mom chose.

I really love these paintings, and am going to make some more - and some bigger ones, too. 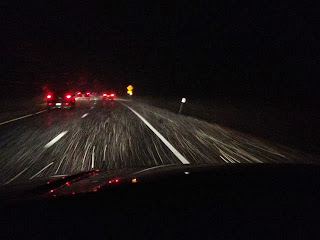 YIKES!  FRIDAY NIGHT on Route 84 in eastern New York state, as I was heading to CT for a holiday gathering with my family, it snowed Like Crazy. This photo doesn't quite capture the blizzard quality of the snow, but it was coming down HARD, and the temp was just around 32 degrees. It was enough to make me tense up and worry, driving up and down the big hills in eastern NY and western CT. 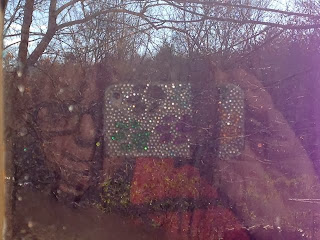 HERE IS AN ODD, spooky photo of me, taking a picture of who knows what through a window. 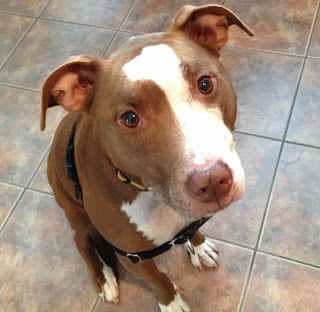 It's Sparky! And she is a good girl.

Want your pet to be the dog of the day? Send a jpg to me at carrieBjacobson@gmail.com