Mowing - and a Getaway Idea 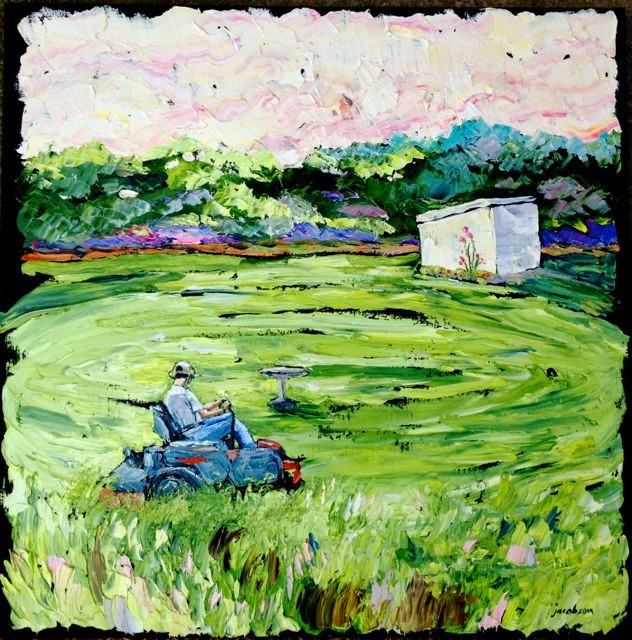 Mowing
Oil on canvas, 24x24
Please click here to email me for price and availability

Justin is a young guy who grew up in Wachapreague and has no intention of ever leaving. He's in his late 20s or early 30s, I think, though I find I'm getting worse and worse at guessing people's ages. At any rate, he is a whip-thin young guy, tall and strong. And he mows nearly all the lawns in town.

He started the mowing business when he was just a kid. By now, he has big equipment, a big truck with a big trailer, a helper - and a pretty big business for this small town, in spite of charging insanely low prices. In many spots, Justin mows many contiguous lawns, going from one to the next to the next to the next, mowing pretty much the entire street - and then doing all the weed-whacking, too.

I was watching him speed around our yard one day, and decided that I should make a painting of him mowing. It's such a summertime moment, isn't it?

As you can see from this painting, and others I've been making recently, I am purposely leaving a sort of raggedy edge on the front. I really like this effect - but I wonder about you? What do you think?

***
IF YOU'RE LOOKING for something fun to do over the weekend of Jan. 17-18, you might consider coming to Virginia Beach for the MOCA Art Show at the Coastal Virginia Winefest. This is the first year that the Museum of Contemporary Art has hosted this show, and it promises to be interesting.

Tickets to the winefest are not cheap - they run from $30 to $60 (for a two-day ticket purchased in advance), but they include wine and beer tastings, food and more. And lodging rates are very low right now. A room at the Best Western is $65 plus change, less than half of the summertime rate. And OK, it's winter, but the beach is beautiful and wild, and you can bundle up and walk to your heart's content!

If any of you come to the event, please stop by and say hello! I'll give a $15 discount - or donate $15 to your favorite charity - to the person who comes from the farthest.

***
A WHOLE BUNCH of people have signed on to sponsor my  upcoming Origins Painting Trip. I'm leaving two weeks from Saturday! Here are my sponsors so far:

Sponsorship start at $50 and go up to $1000. Check out the Origins Painting Trip page on the Jacobson Arts website for more information. 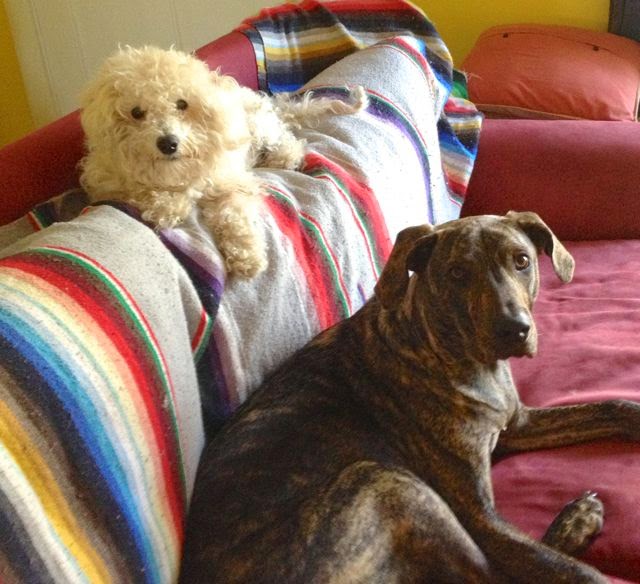 It's the frenemies, Woodreau (on the back of the couch) and Abigail. Woody tries to throw his weight around with Abby several times a day. She responds by stomping on him with her large feet. They both seem to enjoy the relationship - and when the workday is over, they punch out and have the dog equivalent of a beer together.