White Hawk / oil on black canvas / 5x7 / $68 including shipping
sold!
LAST NIGHT, AS I WENT TO BED, red lights started flashing on the tree limbs first, then the houses, then the street itself, and I watched as an ambulance and then a police car pulled up at the corner of Pearl and South streets.
It instantly brought me back to the night that Peter had his heart attack, here, in the living room. The ambulance came - and was there a police car? I have no idea. EMTs came in and hustled to Peter, did things to him, put him in some sort of gurney chair. The lights flashed and flashed and flashed. Dave, a neighbor who has moved away, just walked in through the open door, and in the moment, I hated him, for intruding, for coming in uninvited, for offering to help.
Last night, all of this rushed back and I turned away and went to bed, hoping only that whichever neighbor was in trouble would be OK.
Today, I found out that it was a very nice man, Gene, and that he apparently had been badly dehydrated and would, indeed, be alright. Whew.
***
Dad 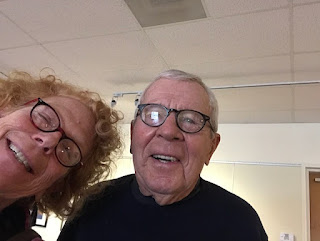 DAD IS BETTER, after a pretty scary few days. He is still in the hospital, and is still far from well, but he was sitting up today, and I hear he watched football on Sunday.
There is no talking to him. He has a phone in his room but it only calls out, and he apparently can't make it work without help. And there is little to no help. The hospital seems to be tremendously overloaded, probably with covid patients; it took my stepmother five hours the other day to get anyone to answer her call.
Thank you for your kind words and for your prayers. I believe it all helps, and I hope you will all keep thinking healing thoughts for Dear Old Dad.
***
Coda
Alone I Stare into Frost's White Face
Alone I stare into frost's white face.
It's going nowhere, and I -- from nowhere.
Everything ironed flat, pleated without a wrinkle:
Miraculous, the breathing plain.
Meanwhile, the sun squints at the starched poverty --
The squint itself, consoled, at ease ...
The ten-fold forest almost the same ...
And snow crunches in the eyes, innocent, like clean bread.
- Osip Mandlestam
By carrie jacobson - January 18, 2021