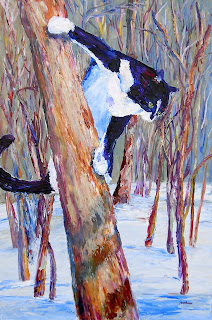 Hunter
Oil on canvas, 24x48, $250
This is the second time I've made this painting. The first time, I'd only just started painting. I had this photograph of Eunice, moments before she leaped from the tree to murder a mouse or a vole or some other innocent creature, and it's really a cool photo. Eunice is entirely focused on her prey, and is gripping the tree with claws, muscles and her giant feet, but you can tell that she's not thinking about the tree, or her position or anything other than the moment of pouncing.

I'd priced the original painting at what I thought was a prohibitive sum. Thought I could show it without worrying that it would sell - and if it did, it would sell at a high enough price that I'd be happy to trade the painting for the money.

This is wonderful! I can see why it would be fun to repaint. Composition rocks and the way you captured the "action" is superb!!!

Ooo... It really has a great quality of impending action. I love the composition, too.

Have you a photo of the first one? It'd be cool to see them together.