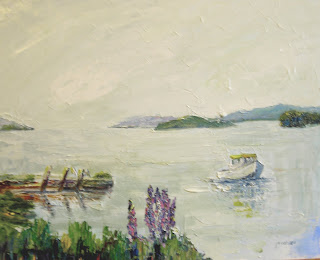 Port Dufferin Harbor
Oil on canvas, 16x20, $200
Port Dufferin, Nova Scotia, isn't much more than a wide place in the road. But for Heather and me, it was a quiet, lovely, serene stopover on our way home from Canada.

We stayed in the one hotel in Port Dufferin, and our room - with a tiny little balcony - looked out over the hotel lawn, a small roadway, and the harbor. We spent time in the evening on the hotel's covered dock. We watched guys fish, and we watched a harbor seal.

The morning dawned rainy and foggy, but we painted anyways, and created quite a stir. About a dozen people stopped to see what we were doing. Most were less than enthusiastic about either of our paintings, though they liked Heather's better than mine.

There's an interesting thing people do when they don't like your painting. They come up, ask if they can look, and then just don't say anything. Once in a while, someone will volunteer a comment. The brother of the guy who owns this lobster boat saw us painting, took a look and then went to get his brother. The brother's one comment was that I should come and paint his other boat.

At any rate, I wasn't happy with this piece when I finished it. Here's the original, side by each with the new one: 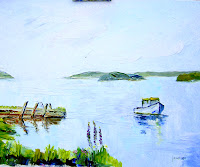 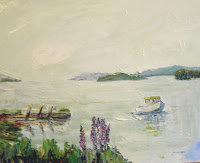 The original piece just felt a little prissy to me. It didn't have the feeling of a foggy, grey morning, and there was nothing cohesive about it. I think that between the rain and the people and the ongoing lack of comments, I just got a little lost. I like what I did to the painting yesterday, though, and I feel that it's a step on the path for me.
By carrie jacobson - August 24, 2010

I quite agree. I really like the atmospheric qualities of the final version. It's quite sublime. I also like the addition work you did in the foreground.

HI, Patrice - I like the changes, too. I still think there's something off in this painting, and I don't know what yet, but I do know it's better!