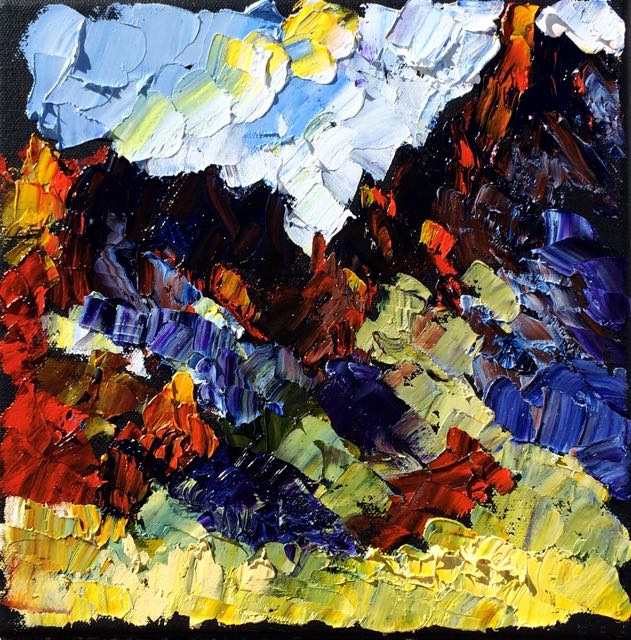 Hard Times Come Again No More
Oil on black canvas, 10x10
If you're interested in this painting, please click here to email me! 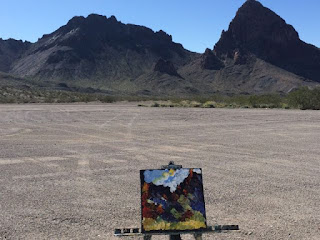 When friends of Dad and Paula told me about the town of Oatman, Arizona, where wild donkeys roam the streets, I knew I had to go. So when my knee was healed enough for me to hobble around a little, I said goodbye to Dad and Paula, and goodbye to Tubac, and set off for home - with just a slight detour to see Oatman. It turned out to be far more than a slight detour. It was a six-hour drive in entirely the wrong direction - but was probably the most beautiful drive of the entire trip.
The road I took from Phoenix to Kingman - Route 93 - wound through rich, golden desert and then climbed up, up, up, to traverse the tops of mountains, through canyons, Joshua Tree forests, and conglomerations of strangely beautiful rock formations. Even if Oatman wasn't all it was cracked up to be, I thought, the drive itself would be worth it.

Good thing I'd thought that! Turned out that the donkey herd had been thinned just the week before, with most of the males and many of the females being adopted out.

Before I introduce you to the one lone burro who did show up, let me first tell you that if you decide to go to Oatman, do not, under any circumstances, drive there from Kingman. Do whatever you need to do to circle around and drive via Bullhead City. The first 10 miles of the road from Kingman are fine. The final 15 or so miles are the most frightening I've driven in my life. The road has no guardrails, no shoulder, is barely wide enough for two cars to pass, and on the right is a terrifying, sheer, deadly drop-off to the rocks below. I've driven on scary roads all over the world, and they don't hold a candle to this one.

The lone burro I met is called Duke by the locals. He's the male of the herd, and one guy told me Duke is the smartest of all of them. Young males would come down from the hills to court the females, and Duke would run, feigning fear. The young males would fight among themselves, and when they were exhausted, Duke would show up again and beat the tar out of them.

He has a broken ear and a bunch of battle scars, but he's smart and tough and gentle. He ambled up the center of the road into town, and stood there braying until the tourists heard him and began to flock to him, handing over pellets of burro food.

***
Scenes from the Road 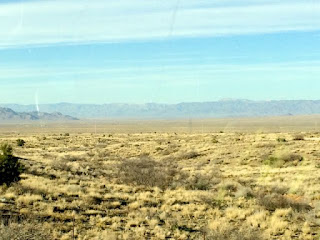 Above and in the two photographs below, scenes from Route 93.  The trees in the middle photograph are Joshua trees, which only grow in a few places in the US. 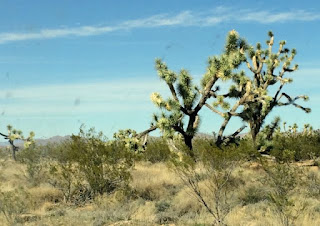 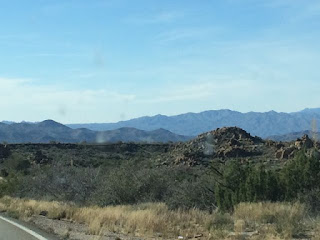 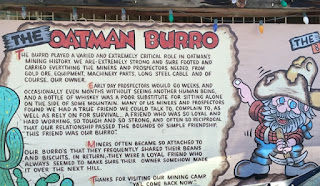 If you click on the photograph above, you can read the story of the burros of Oatman. 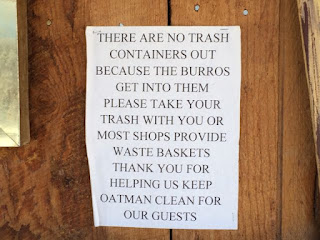 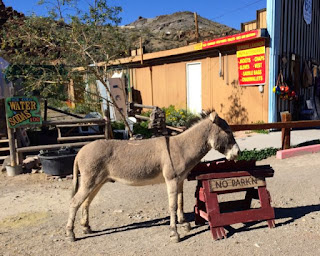 Here's Duke, in all his broken-eared glory. 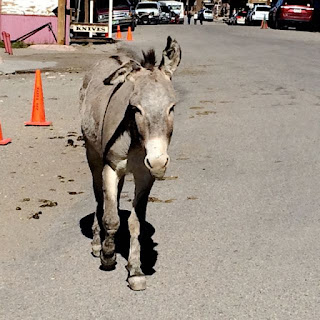 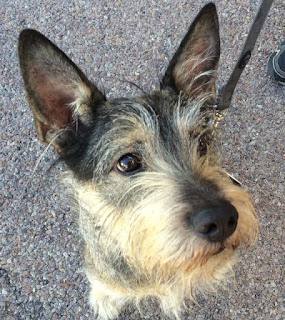 Met this great-looking guy at the show!

"To be an artist is to believe in life."

You had to drive through Wikieup on 93 to get to Kingman. I worked in that PO way back 93 or 94. Talk about out of the way, but a gteat experience. Ed and I went to Oatman one time, one time only. lol

Hi, Linda - Yes, Wikieup! As I was driving along, I thought - Oh, maybe I'll stay in Wikieup. Uh, nope... I did see the post office, though. Wow, out of the way, indeed. Amazing! But beautiful.