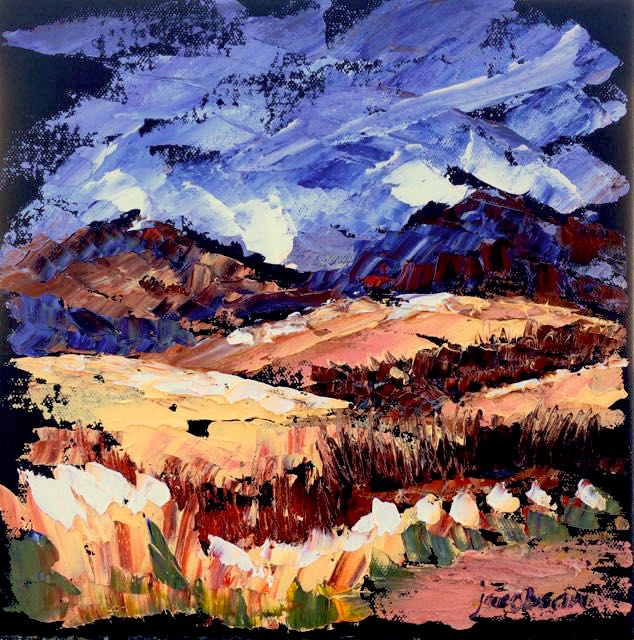 Arivaca Grasslands
Oil on black canvas, 10x10, $125
Please click here to email me if you'd like to buy this painting

A few years ago, at a show in South Carolina, I met a couple - Patti and Miguel - who liked my paintings very much and bought a couple of them. I warmed to these two right away, and as we talked, we found that our paths had crossed in a remarkable number of ways. 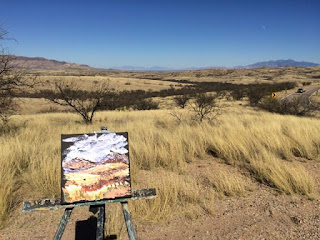 Arivaca is a fascinating little place that, according to my dad, and a story in the Arizona Daily Star, Arivaca "has been a haven for miners, ranchers, hippies, smugglers, addicts and retirees." It's a small, dusty town with little to brag about, and yet, I find myself charmed by it. Around Arivaca are hills, mountains, grasslands and rivers that are usually dry. Cows and horses wander about, crossing and recrossing the Arivaca Road. Ranches dot the landscape. In town, there are adobe and wooden houses, trailers and mobile homes and a couple off-the-grid hunting cabins. A working ranch helps troubled boys straighten out their lives.

The place has touched me somehow with its roughness, its rebel history, its eccentric citizens. I enjoyed my visit, and my time stopping to paint on the Arivaca Road. 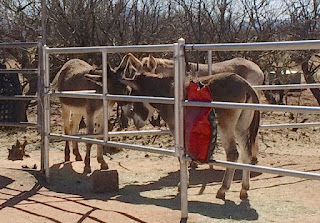 WHILE I WAS in Tubac, I met Karen Pomeroy, who runs Equine Voices, a rescue operation for horses and mules. Equine Voices is in Green Valley, just up the road from Tubac.

Karen has a tremendous operation in Equine Voices. The organization houses 61 animals on 15 acres. They rescue horses and donkeys from abuse, neglect and abandonment situations, and have a focus on adopting mares whose urine has been used to make premarin, a hormone-replacement drug. The urine is only useful when the mare is pregnant, so these horses are impregnated again and again and again over the course of their lifetimes.

Animals are adopted out regularly from Equine Voices, and sponsorships, donations and volunteers are actively solicited. It's a really great program, and I hope you'll take some time to look over the website.

I'm going to work with Karen on some ways to raise money and awareness, so you'll be hearing a lot more about Equine Voices in the future! 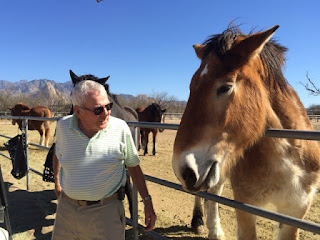 Dad and I visited Equine Voice together, Here's Dad with Gulliver, the mascot for the operation. There are quite a number of big draft horses there, along with donkeys, including this fresh guy, below. When we approached him, he was rolling in the dirt. 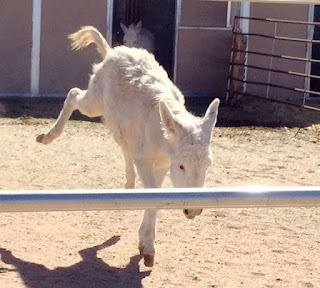 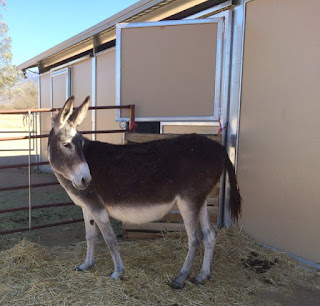 This gal was about to give birth. I was hoping it would happen while we were there, but it didn't! I'd love to see a baby donkey. 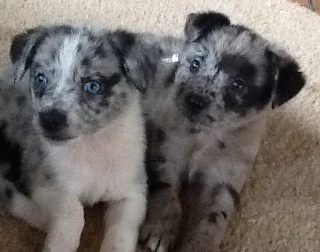 Well, nuts or not nuts, we're adopting two more dogs. That will make six, for all of you who are counting. These two are catahoula leopard dogs, or at least their mother was. She was killed by a car when the puppies were 10 days old. Three of the six pups died. The other three ended up in the capable hands of our friend Christine Stark. We were going to take just the blue-eyed one, but the little dark-eyed one worked his way into our hearts - and the two will probably be better together than they ever would be apart.

"Every good painter paints what he is."