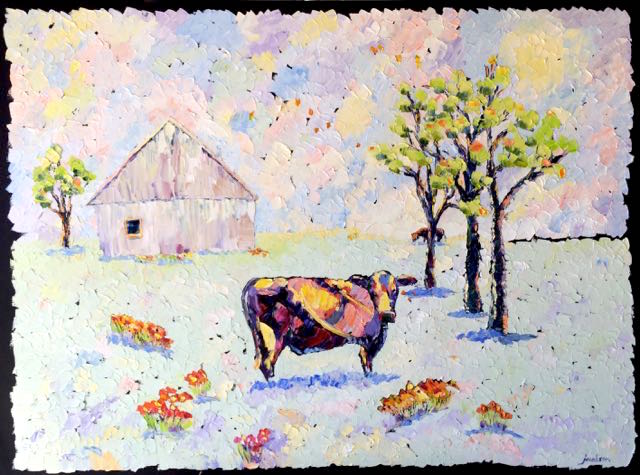 Fred and Ethel
Oil on black canvas, 36x48
Please email me at carrieBjacobson@gmail.com
for price, availability and other details!

FRED AND ETHEL, CHARMING though they might be, did not bring me good luck in Pittsburgh. Or maybe they did.

Set-up for the Shadyside show, on Walnut Street in Pittsburgh, is at 3:30 a.m. on Saturday. You're allowed to drive in to the very narrow street, unload your stuff, and then get out. You can start putting your tent up at 5 a.m., when everyone has driven in and unloaded. After the show, the process reverses. You take everything down and put it on the sidewalk, and when everyone is done, you can all drive in.

Most artists had to park in the organizer's lot, which was several miles away, and then catch a shuttle bus back and forth from the show street to the lot.

Because of all this, Alison Thomas and I did some different stuff. Alison is a photographer/digital artist and a friend - check her work out at Serenity Scenes - and she and I split a suite at a hotel close to the show, and also decided to rent tents. When you rent a tent, it comes with all the weights, and also is put up and taken down by the tent guys. Because we both had vans, only one of us could park in the lot by our hotel; Alison had to park in a downtown garage, as my van wouldn't fit.

So... We got there at 3:30 a.m., unloaded, and reparked the vans. In time, the tent guys came along and put our tents up, and we were able to hang our work. Both show days were blazingly hot. I sold one painting, and that was it. But I loved the couple who bought my painting, and as friends have reminded me, it's better to sell one than to sell none.

The show closed at 5 p.m. on Sunday. I took my paintings down, wrapped them up, went and got my van and was able to park in a small lot close to the show street. I made two trips to the van with my handtruck, and was closing the van doors when all hell began to break loose.

Artists at shows are obsessive weather-watchers, and we all have scads of weather apps on our phones. None of them picked up the storm that blossomed over Pittsburgh. It had been a sunny, hot day, and then suddenly, we were in the middle of thunder, lightning, high wind, sheets of pelting rain and yes, hail.

Alison had been unable to get her van out of the garage - the gate wouldn't take her credit card, and wouldn't take cash. While she was wrestling with that, I found a tarp and put it over her photographs, which were on her handtruck. I moved the rest of her work to a doorway, covered it with a sheet and piled up stuff in front of it. I didn't notice her wall panels, however, and they got soaked. A huge huff of wind blew some of the coverings off her work, and a few pieces were damaged. 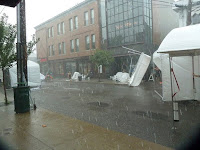 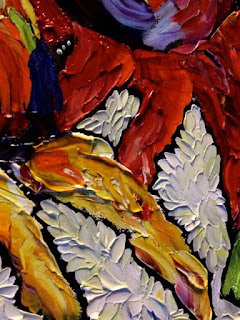 After my most recent posting, Morning's Glory, a friend suggested I post
a detail shot of the texture of the piece. So here are a couple! 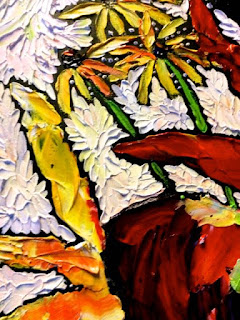 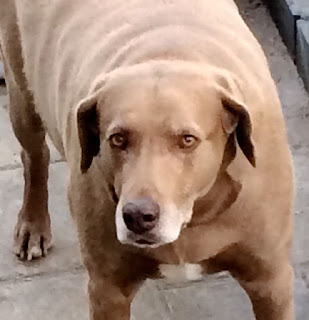 It's Red, whose human is Christine Stark, our dog pusher. Yup, Christine has been responsible for us having Abby, Koko, Dr. Cooper and Lulu. I joke, but Christine is a force of nature, who has done tremendous work fostering and finding homes for dozens, if not hundreds, of dogs. A passel of puppies was responsible for Christine losing her rental home. The group she worked for must be missing her like blazes right about now.

"We are saved only by love - love for each other and the love that
we pour into the art we feel compelled to share."


Thanks to Lynn Hoins for sending this quote to me! If you have a good art-related quote that you'd like me to include as A Final Thought, please send it to me at carrieBjacobson@gmail.com