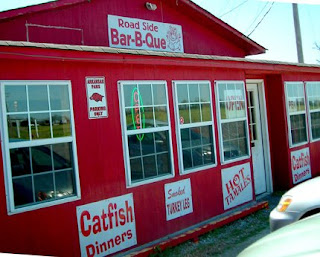 Roadside Barbecue, in Arkansas, just across the Mississippi River from Memphis.

As I left on Sunday, I saw that forsythia was just starting to bud in Hartford. Then, no forsythia, no budding, no nothing, until I reached West Virginia, where the forsythia were budding to the same degree they'd been budding in Hartford.

There's a town in southwestern Virginia named Groceclose. That doesn't touch Bucksnort or Birdsong, Tenn., but it's close. Groceclose. In Tennessee, I crossed through the Nolichucky River Basin.

The highways themselves create their own microclimates, at least this early in the year. I kept seeing beautiful foliage budding, and kept getting off the road to paint what I was seeing. But when I'd leave the highway, I'd find that the foliage I'd seen there was at a different stage than the foliage I was seeing here. Off the highway, everything was back a week or so. Finally, it dawned on me that the open space of the highway, and the heat absorption of the pavement make a climate that's warmer and sunnier than what's off the road.

The colors of spring, I've realized, are just like the colors of autumn, except that they're lighter, much lighter. There's lots and lots of white in them.

The bridge over the Mississippi, from Memphis to Arkansas, is truly horrifying. It's high and narrow and old and loooong. Chunks are missing from the pavement, and about halfway across the bridge, all the trucks pull to the right for a weigh station. They do so without even looking, it seems. I don't remember being happier to get off a bridge in a long time.

I passed through Brinkley, Ark., which bills itself as "the home of the ivory-billed woodpecker, rediscovered in 2004."

At the Roadside Barbecue, you can get a barbecued bologna sandwich. The woman behind the counter told me that they call it "round steak." I just got regular barbecue, and it was delicious. All over all the walls, people had signed their names. And the bathroom, which was nearly as hot as the kitchen (my guess is they share a wall) was absolutely spotless, with a no-nonsense cleanliness-checking schedule posted on the wall.

I'm dieting while traveling, which has its tough moments. In Virginia, I went to Subway, ordered a salad, paid for it, and then was told that there were no forks. I got my money back, he got his sandwich back, and the woman at the next Subway looked at me a tad askance when the first thing I asked was whether they had forks here.
By carrie jacobson - April 08, 2009

Carrie, I'm really enjoying your trip vicariously! I've made that x-country run a number of times myself buts it's been a good 13 years since the last time. I look forward to seeing your updates and watching the scenery change in your paintings. Keep up the posts as you go if you can. Enjoy!

Hey, Rick, good to hear from you! It's so great to see new places, new skies, new land. On the way out, I'm focusing on getting there. On the way back, I'm going to focus on painting. I feel lucky to be making forward progress and getting a few paintings done, too! Thanks for reading.