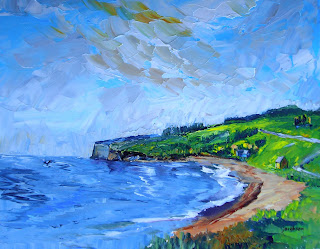 
Call me at 860-442-0246 or email me
if you are interested in buying this painting
As night fell last night, the wind came up. The hotel had a long porch, with dozens of chairs on it, and as I fell asleep, I could hear the wind pushing the chairs along the porch. This morning, it looked like an ogre had visited, and angrily tossed the chairs everywhere.
The gale continued, the wind so strong it was hard to open the van's doors. There would be no painting today. So we drove. We drove around the curve of the Gaspe. We drove to Perce and saw the giant pierced rock there, that Peter has termed the Nubble Light of Canada - ubiquitous, and in its own way, hilarious. Here's a picture:

Click on the photo and you can see the pierced part - the little tunnel through the rock. It really is a wonder of the world sort of thing, in a way. In another way, it is a big rock, no more accurately emblematic of the Gaspe as Nubble Light is of New England.

But it is on all the guidebooks, on the sides of 18-wheelers, on calendars and placemats throughout the region. An entire town has grown up around it, with hotels and restaurants, trinkets and souvenirs and, yesterday, June tourists in January garments.
And so we went on, and saw even more beautiful and amazing things. We saw red sand beaches, and villages nestled beneath muscled ochre cliffs. We saw a floating yurt. We watched seagulls flying backwards in the screaming wind, dining on snails. The gulls would fly high and drop shells, dip down to pick them up, and then fly high again to drop the shells until they broke. The wind was so strong, the gulls didn't even have to flap their wings.
In a town called McLeod, we stopped to take a picture of Heather MacLeod beneath the sign that nearly bore her name (other family members spell it without the "a.") Fern, a nice man who lives in the house beside the sign, came to make sure we were all right, and then offered to hold a branch out of the way so we could get a better picture. Fern's pontoon boat had broken loose from its moorings and been damaged in the gale.
Somewhere between Perce and McLeod, we saw a white barn with a blue roof and a blue truck parked inside. It was a beautiful image and is going to be a painting one of these days. 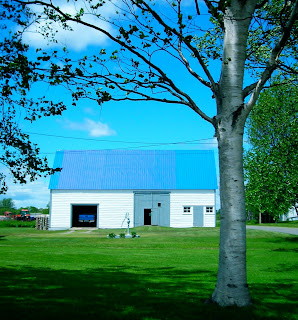 We have seen marina after marina here with all boats up on cradles, out of the water. I wonder if the reason for that is that the amazingly high and low tides?
Also, all over the place, we have seen ladders left on top of metal roofs.
Here is one more photo, inexplicable and amusing, from the day:
I was sad to leave Le Gaspesie, with its empty spaces and its haphazard arrangements. I loved the people there, and the breadth and depth of the place, and I loved the sense that though there was history, to nearly all the people we met, Le Gaspesie felt like a beginning.
By carrie jacobson - June 17, 2010