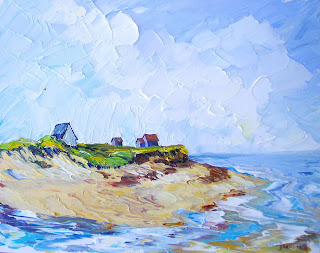 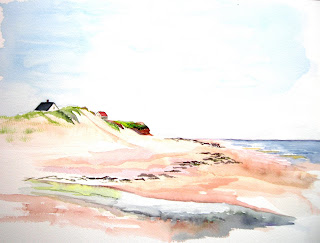 Whenever Heather and I have encountered people on this trip, we've asked them to tell us a beautiful spot to paint. So when two people at the desk of The Pines, in Summerside, Prince Edward Island, told us the same place, on separate days, we figured we should find it.

It’s called Thunder Cove, and we are pretty sure that this is the place they described.

It’s a fairly long stretch of beautiful white sand that runs into steep red cliffs, with houses atop them. The sea is vast there, and the day we visited, it was a white blue that blurred at the horizon so it was hard to tell where the ocean ended and the sky began.

I talked with three sisters, ranging in age from 30s to 40s, I’d say, who were there with their mother, who told me she was 78. One of the sisters said she’d always wanted to visit Connecticut, a desire I found odd and fascinating. I grew up in Connecticut and we live there now, and while it’s a fine place, it’s not the sort of place I’d ever imagine anyone wanting to visit.

They were sitting together on the beach, laughing and talking and enjoying each other, and I found myself suddenly, truly, missing my mother.
By carrie jacobson - June 24, 2010

They're both beautiful - just like the versions of the potato field.

I'm melting - soon as I can I'll be more in touch!

Thanks so much for the note! We are having a ball. I just showed your blog to Heather, and she (like me) loves your paintings, and your approach and attitude. Peter has been telling me how hot it is at home, and that's Connecticut. Must be a steam pit in Georgia. Here, it's been cold! In the 50s in the mornings. I am not looking forward to going home to that soup.