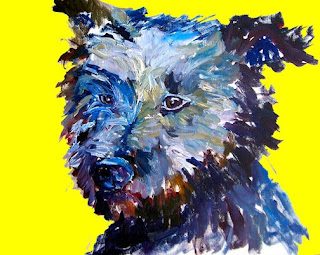 Galen's new pup. Not for sale.
My friend Galen was let go by the newspaper chain I used to work for. She was the editor of one of the company's weeklies and they eliminated her position. After I left, they eliminated my position, editor of one daily and two weeklies. Last month, they eliminated the position of managing editor, too. Makes me wonder how these papers will be published. Luckily for me, that's no longer my worry.

Once many laid-off journalists are over the initial shock, they're finding that life outside of newspapers is better than life inside newspaper. Also, from outside, it's miles easier to see why newspapers are failing. But that's for some other posting on some other blog.

Galen has landed on her feet, found a better job, and had a long vacation. She's also started a wonderfully amusing blog, galenmcgovern.blogspot.com - and she's getting a new dog.

This pup, part Wheaten terrier, part who knows what, (my guess would be bouvier) is coming from a shelter in Plainfield, Conn. He looks like a beautiful guy, mischievous, fun, bouncy.

I will donate this painting as part of the Art for Shelter Animals Project (artforshelteranimals.blogspot.com) - but it's going to be hard to part with this one!
By carrie jacobson - May 31, 2009

Thanks, Patrice! I love it, myself,too.