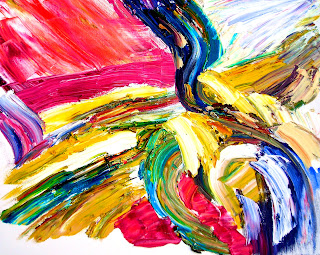 Jojo, one of our dogs, is just a tad enthusiastic in her adoration of me. Her world doesn't simply revolve around me - her world IS me. And this is great for both of us.

Well, most of the time.

Yesterday, I came racing into the house after being out painting for a while. I had to pee wicked bad, as my Maine friends would say, and so I said hello to the dogs and sped by, without pausing to pet them or even close the door to the bathroom.

In they came, with Jojo leading the pack. As they crowded into the tiny space, begging for attention and a proper greeting from me, blobs and streaks of crimson began to appear. Was someone hurt? Cut? Spraying arterial blood? The color appeared on the door, on the wall, on the Samoyed. It made no sense.

Then I realized what had happened.

Jojo, in her joyous enthusiasm, had wagged her way from the kitchen to the bathroom, and smacked her tail into one of my not-yet-dry paintings. Every time she wagged, in our clean, white bathroom, wham! Alizarin crimson everywhere.

Sheesh. Sometimes, I'd be happier to be just part of Jojo's universe, not the entire thing.

Yikes! I wonder if its going to be tougher getting it off the walls or the fur!

Art is where you find it! Your dog wanted to create also, it would seem!

That dog has TOO MUCH energy! If she starts painting, the entire house will be filled, floor to ceiling. I did get it off her - which was easy, since most of it was on the walls. It was tougher to get it off the Samoyed. She wagged in his face! And Jala, I'll take a pic of Jojo's abstract work and post it later!

Came by way of Jala's blog ( for the same reasons you've awarded her- if she thinks it's worthwhile, it is...).
Love the dog story and apparent lack of annoyance at something almost funny.

And your paintings that are so spirited and fresh and lively.

Hi, Bonnie, and welcome. Thanks for the comment... And believe me, if I got annoyed with every disaster our dogs created in this house, I'd be spending my LIFETIME being annoyed! Glad you like my paintings!