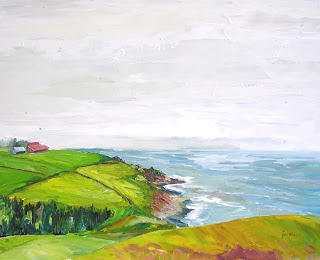 Cliffs
Colindale, Cape Breton, Nova Scotia
By Carrie Jacobson
Oil on canvas, 16x20
Call me at 860-442-0246 or email me
if you are interested in buying this painting 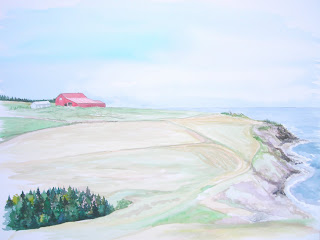 Cliffs
Colindale, Cape Breton, Nova Scotia
By Heather MacLeod
Watercolor on Arches paper, 12x16
The day after the fog, we made it to West Mabou Road in Colindale.
Early in the morning, the sky was still gray, and the sea was gray, too. Lobster boats churned off shore, motoring in again and again, the thrum of their motors bouncing oddly off the cliffs below.
As we painted, the clouds lifted and the day became sunny and beautiful. This is great - but it can be difficult to master the changing light. The color of the water, and the color of the fields, shifted two or three times as we painted.
Also as we painted, we met Hugh the Barber, a lovely retired man who came along in his car on his way to somewhere else. He admired our paintings, and on his way back, invited us to stop in when we were done.
And so we did. Hugh's place, a cabin he and his wife have had for nearly 40 years, was as neat and tight and inviting as any home I've lived in. When we arrived, Hugh was building a bunkhouse for some of his grandchildren. He showed us his handiwork, then showed us around his cabin, then gave us coffee and cookies, and told us all about the neighborhood.
Meeting Hugh was one of the high points of the trip. His warmth, his generosity, his welcome have left a deep and happy impression on Heather and me. In some ways, he has come to represent Canada to me, and it is a Canada I am pleased and proud to have met.
Here's Hugh: 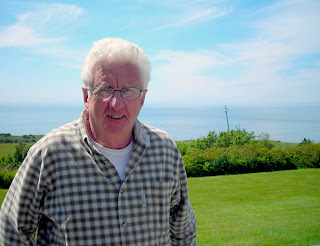 Here's the view from Hugh's deck: 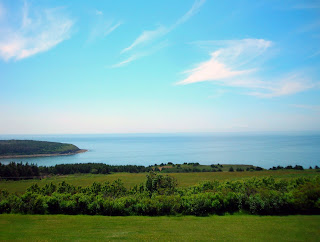 p.s. I am home now! And on Saturday, I'm showing my work, including paintings from the Canada trip, at the Niantic Outdoor Arts and Crafts show (http://www.nianticartsandcraftshow.com/start.html). The show is at Niantic Town Hall, 108 Pennsylvania Ave. I have been to this show, though it was a few years ago, and it was easy to find. There's a map on the website - also, Niantic is not very large, and the show was (at least in my memory).
So if you're in the area, or you can be, please come!
If you can't make Niantic, I will be in the Wickford, R.I., Outdoor Art Festival, next weekend, and Art on Groton Bank, in Groton, Conn., the weekend after that. Details will follow.
Thanks for reading.
By carrie jacobson - July 02, 2010