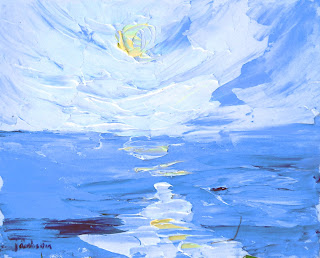 
Call me at 860-442-0246 or email me at carrieBjacobson@gmail.com
if you are interested in buying this painting
I fell in love with the countryside of Atlantic Canada, and with the people, and also, I admit, with something called "poutine."

Cheese curds sound disgusting (anything with "curd" in it sounds horrible to me) but they are delicious. In short, they're little pieces of cheese that just haven't made it into the big wedge of cheese. If you get them when they are fresh, they squeak against your teeth. They are a little chewy, and a little salty. Imagine mozzerella, but a little tougher and saltier.

The cheese curds melt, between the gravy and the fries (frites). The dish is fabulous, but fattening and hideously bad for you.

Apparently, it was invented by French Canadians in the 1960s, and persists as something you can get pretty much everywhere. The very best I had was at the Frosty Treat restaurant, a summertime-only place in Kensington, on Prince Edward Island.

I tried to make a healthier version of poutine here a couple of nights ago. I made oven fries instead of french fries. I used low-fat hamburger, and made gravy with gluten-free flour and some fat-free cream. The peas were the same. It was OK, but it wasn't great. It didn't approach even the least good poutine I had in Canada, but it was fun, and it reminded me. 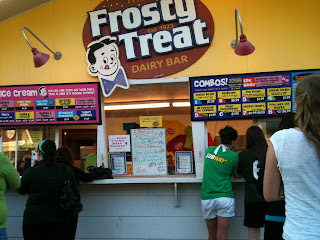