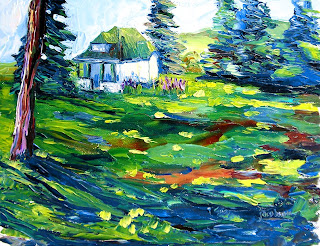 It was a fresh, bright wind that blew over Prince Edward Island, keeping it cool and pleasant all the time that Heather and I were there. The wind might be a contributor to the erosion we saw there, though.

On the Gaspe Peninsula, we spoke to a nice couple whose back yard was falling slowly into the sea. They had had to move their garage; just down the street, a hotel had had to close, as the land where it stood was crumbling beneath it.

On Prince Edward Island, the sea and the wind cut into the soft red earth of the cliffs, making for beautiful scenery but a treacherous environment. An immigration official we spoke with at the border said he believed Prince Edward Island wouldn't be there in 100 years; the ocean would simply wash it away.

Cape Breton, for all its crags and cliffs and wind and waves, offered more shelter. Trees and hills closed in around this closed-up camp, and the Margaree River ran behind it. Heather and I spent a cool afternoon painting here, while a soft breeze blew and the shadows lengthened. No one disturbed us, no one questioned us. It looked like no one had visited this place for years.
By carrie jacobson - July 26, 2010