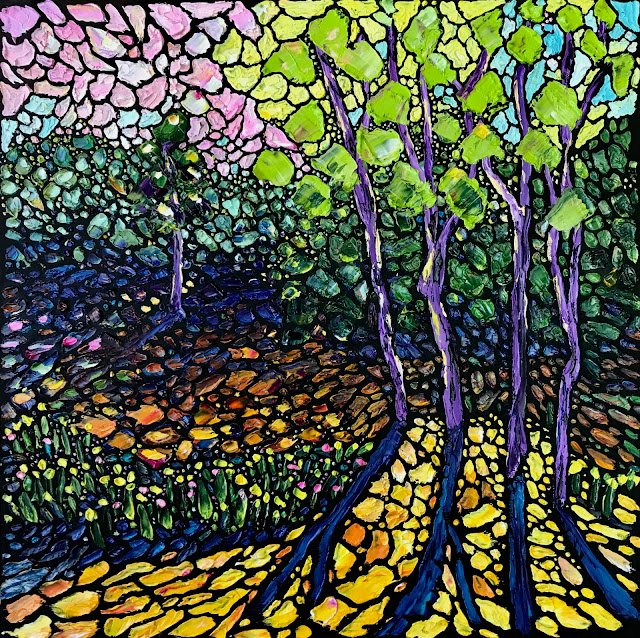 A few days ago, in a book called "The Secret Lives of Color," I encountered the idea that, in the past (and I'd add, in academia and serious intellectual artistic thought today), drawing - line, architecture, replication - were far more important than color. Drawing skills were what was valued, and I can see that when I think of the famous, pre-Impressionist paintings (that honestly - yes, I am a peasant! - mostly bore me).

When I read this, my entire painting life began to make sense to me, and I found my recent questions answered. I've often said that my paintings are all about color - and I have said that off-handedly. But truly and honestly, they are, and always have been, all about color, in a serious and fundamental manner.

Dropping the brush and taking up the knife was a vital step along this route. It allowed me to apply pure color to the canvas, while loosening my grip on line, drawing and detail.

All of this has helped me understand and accept the mosaics , which have worried me enormously of late. Now I see they are the next logical step in the exchange or abandonment of line for color. In large part, with these pieces, I am building the painting by using only the building blocks of color, light and shadow.

To some degree, this is what I've been doing all along - but the mosaics do it in an undisguised and raw way. They are harder to do than anything I've attempted so far. Next blog post, I'll write a little bit about why. 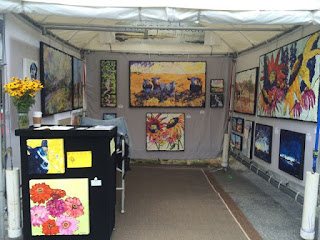 The Wachapreague Volunteer Firemen's Carnival is on, Wednesday-Saturday, through July 7. The carnival supports the volunteer fire department, and is great fun! There are rides, games, food and music, on the carnival grounds, Atlantic Avenue, Wachapreague.

Our Fourth of July parade starts at 11:30 on the Fourth, on Main Street in Wachapreague. It's not a long parade, so don't be late! Amazing, spectacular, astonishing fireworks start at dusk on the Fourth. You can park in the park to watch. Donations are appreciated - the fireworks are put on by Rich Pulchaski, a local pyrotechnic genius, and he funds them pretty much by himself.

I'll be at two shows in July -


And that is almost all my shows for the summer, so if you want to see my new work, I hope you'll be able to come! 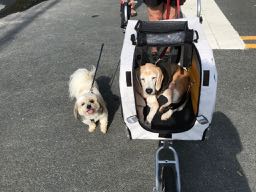 Met these two (and their service providers) in Onancock on Sunday. I've forgotten their names, but the one in the stroller is 15, I think! And the one walking is no spring chicken, either.

via "The Painter's Keys," where you can subscribe to get an always thoughtful, usually fascinating and often freaskishly pertinent newsletter. For free.