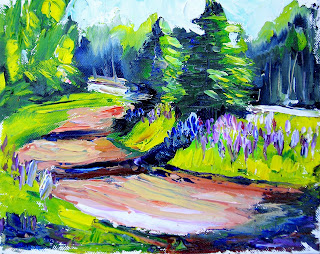 Turn-Around
Oil on canvas, 8x10, in (real) antique frame
Call 860-442-0246 or email me at carrieBjacobson@gmail.com for price and shipping information

I stepped from newspapers into painting, and found myself in a new world. But I'd be foolish to think it was not connected to the old world.

On our way to Canada, Heather and I saw a huge field of lupines, massed along the edge of a dirt road. We stopped to paint (you can see that painting here). The field was gorgeous, the air sweet with lupine scent, and we painted happily. When I was done, I could see that I had some time left, and so I thought I'd do another painting.

I got out my canvas, and turned to look for something fresh - and saw, right behind me, the scene you see in the painting at the top of this post. It was far more interesting, far more engaging, far more arresting than the scene I'd painted first.

When John F. Kennedy's body was lying in state in the Capitol Rotunda, Jimmy Breslin went to Arlington National Cemetery and spoke to the old man who was digging the grave that would hold Kennedy's casket. That story (you can read it here) became famous for lots of reasons; as an editor, I always made sure that young journalists read that story. I made sure that they'd at least heard about looking beyond the obvious.

Apparently, it's a lesson I'm bound to learn again and again.

Here's another lesson I'm bound to learn again and again: Don't give up.

I fared abysmally at the show in Niantic. A friend bought one painting (this is a dear friend, who has bought far too many of my pieces) and then, as I was packing up, I let a stranger bring a painting home to try it out. She has ended up buying it, so I did sell two - but at the end of the show, I'd only sold the one piece, and it was depressing.

But I had looked at my tent, at my display, and I hadn't liked it. So when I recovered from the heat and exhaustion of that show, I set to work to redo things. I took away the sheets and the ribbons I'd been so happy with. I took away the yellow. I repainted the exhibition panels white, stripped down the display, got new, fresh ideas.

The first day of the Wickford festival, I liked the new look. Liked it a lot.

By afternoon, I was stumped and discouraged again. Many people had stopped in, and I'd had wonderful conversations with them - but no one had bought anything.

So I rose at 4 on Sunday morning, brought half of my paintings back up to the studio, brought a few different paintings down, loaded up the van and reworked the display. I priced some paintings higher than I'd priced them on Saturday, and priced some lower. I also made sure I was wearing my lucky earrings and my stack of silver bracelets, both of which I'd neglected to wear on Saturday.

And on Sunday, I sold six paintings! And the people who bought them were more excited about my work than anyone who's come into my booth all year.

Was it the earrings? The bracelets? The prices? The new arrangement?

I don't know. But here are the photos. I'm happy to hear from anyone with comments, insights or ideas.

Here's the booth in Niantic. I couldn't get far away enough to get the entire tent in the photo: 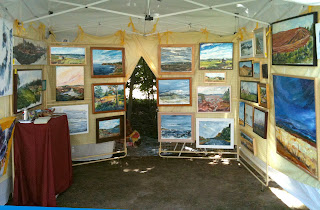 Here's Wickford on the first day: 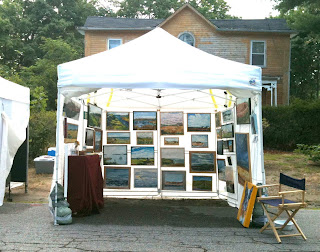 Here's Wickford on the second day: 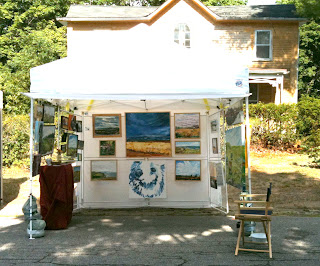 Here are the girls who sold cold drinks in the driveway across the street from me the first day in Wickford, and made more money than I did: 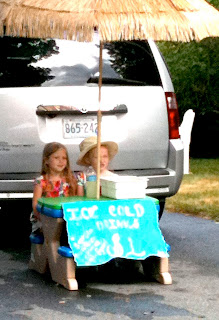 I have been checking out your blog for the past couple weeks. First off, congratulations on selling 6 paintings. That's nice! I am still in the "pondering" stage with my art. I love looking at others' art and do love painting. I hope to actually exhibit and sell my work one day, but it's been difficult to get around to painting recently. But, for what it's worth, the one thing I did notice that was much different, that caught my eye from your first and second booth set-ups to the third one was the variation in size and placement. The previous set-ups seem a little more (forgive me) boring, because of the lack of size differentation and the very "organized" close positioning. Perhaps, the composition of the canvas/frame set-up shows someone how a specific painting might be displayed in their home. And it's easier for them to see that when their spaced out differently. Like I said, I do not have any experience with exhibiting paintings yet, but this is what I noticed while looking at your booths. Thank you for letting me comment. Take care, Brandon.

your paintings are beautiful...
congrats...

Hi, Brandon - Thanks for the note, and for checking out my blog.

I ponder a lot, even while I am in the midst of painting, and showing and selling and trying to figure out how to sustain a life with this. I have realized that if I am to be a painter, I have to be a painter, and not a house-cleaner, or gardener, or cook, or any of the other thousand pursuits that I can (and do) use to avoid painting. And I love painting more than anything! But still, it happens that I look up, and the day has almost gone, and I haven't painted.

That's one of the reasons I started the blog, and made the commitment to finish a painting every day, or nearly every day. Right now, I'm coasting a little, but I've found that after one of these painting trips, I need that.

I agree wholeheartedly with your astute comments about my various booth displays. I designed pages for newspapers for years, and am starting to understand that a successful booth display is much like a successful page display, with a central focus, white space, and directed movement, among other things.

I appreciate your analysis, on this, and on anything else that you might consider. I look forward to seeing your paintings!

Many thanks, jyothisethu. I appreciate your taking the time to look and to drop me a line.

Thank you for telling me how your process works. It's encouraging. I really need to just commit and do it. I started my blog for the same reason but didn't really have a goal, so I end up hardly painting at all cause like you said everything can easily get in the way. I look forward to seeing more of your paintings as well. I really enjoy your style, and i really like the new waterscape painting you posted. Take care.

Hi, Brandon - You know, I really think it is mostly that, the decision to commit. At least, that's what it is for me. And it is a day by day thing. Even after a few years of doing the blog and finishing a painting almost every day, it is still a day by day thing with me.

Honestly, I haven't done much painting since I've been back from Canada. I've had shows every weekend, and it's been a million degrees here, and I've been coasting a little, on the Canada paintings. I have done a few dog portraits that I haven't posted to the blog - but I know, from my past trips, that I need a couple weeks to recharge... and so it is OK. Today, I am itching to paint! But I have another show, so I will go and set up my tent, and do my thing - but I am taking canvas and easel, and I plan to paint while the show is on.

Also, it is the anniversary of my mother's death, and so I feel even more compelled to paint.

So, onwards! Push all the crap out of the way and paint. Live in a messy house, let your friends do the going out, eat leftovers and sandwiches, leave the computer alone or do it at odd, fill-in times,... this is how I get to my painting. You'll find things that help you get to your painting, I am sure.