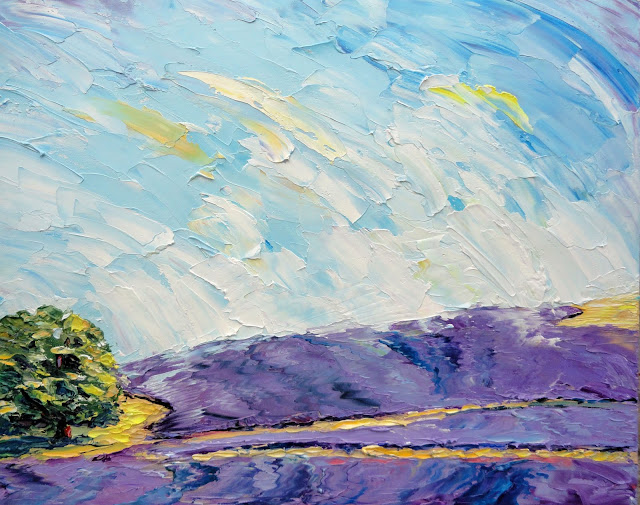 Lavender Farm
Oil on gallery-wrapped canvas, 16x20.
Please contact me for price and delivery information
Last weekend, I thought our oldest dog was at the end. We took her to the vet on Monday to see if anything could be done for her, and I was expecting to come home without her.

She is nearly 15, a chow-German shepherd (as far as we know), and has been creaky for a while. Last week, her night-time pacing and doggie dementia combined to make exhausting and terrifying situations for her and us. For instance, one morning, her panting woke me, and I found her stuck halfway through a small end table that, trying to escape from, she had dragged to the middle of the kitchen.

It would be funny, and I am sure that in future years it will, if it were not so unhappy and dangerous for her. By the time I got her out, she was so whipped she could barely walk.

But our miracle-worker of a vet, who himself has a 15-year-old dog, didn't say, "she's clearly too decrepit to keep living." Instead, he said he had ideas, and encouraged us to try them.

We made a recipe of beef and rice and veggies for her. Started giving her benadryl to get her to sleep at night. Put her on doxycycline and prednisone. Got a bottle of something called Sunilite, which helps not only with doggie dementia, but also with the odd flipping of night and day that many old dogs experience. We're going to try her on melatonin. And we got her a collar that has a naturopathic something in it that is supposed to help calm her.

And by gosh, she's better. She's still ancient, but she is stronger and happier and clearly more herself.

I know it's a matter of days or weeks at the most, probably. But if she can be happy and not panicked, and not exhausting herself by pacing around, then those days or weeks are going to be good for all of us.

In the meantime, I painted this from a photograph that someone sent me. Here's the photo: 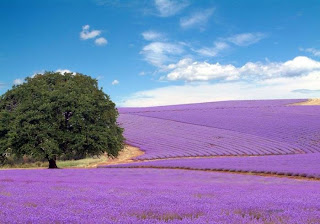 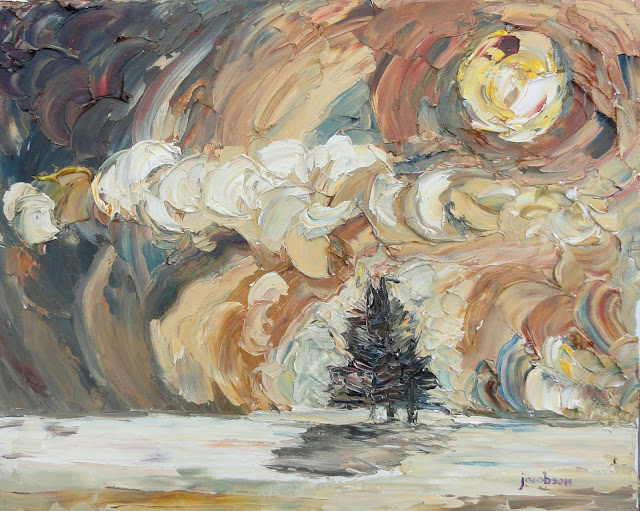 Reservoir Morning
Oil on canvas, 16x20, $380
This is my second effort at painting the brown, foggy morning at the reservoir down the street from our house. I really like this painting, though, again, it doesn't capture the soft dreaminess of the scene (the photograph I worked from is in the next posting).

Of course, for me, painting is not about replicating the scene, but about echoing the feeling - and I do think this gives a little of the feeling.

I have some ideas to try this with some metallic paints I have. So maybe this afternoon!

Thanks for reading, and for following my journey.
By carrie jacobson - April 18, 2011 2 comments: 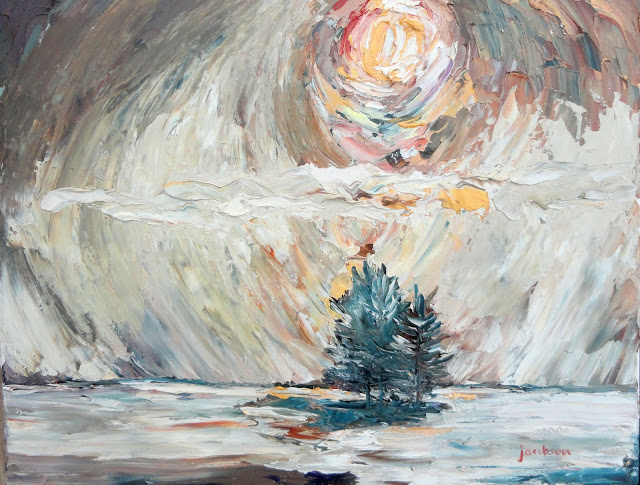 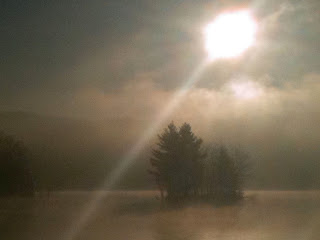 My photo
I have the very good fortune to live near the Groton Reservoir, and to cross it several times a day. There's one place where you can park and paint or do whatever, but of course this is not in the most scenic spot. Otherwise, there's really no stopping - though at the hours I am usually crossing, I can stop in the lane and shoot whatever photos I want.
The camera made this day of sun, and browned up the scene a little - it was more gray. This is the first in a series of paintings I'm doing of the reservoir. Out of my usual color range, I know - but an interesting contrast for me - and fun!
Tomorrow, I'll post another.
By carrie jacobson - April 16, 2011 4 comments:

This is just a small inlet near the Jamestown Bridge. Something municipal - the transfer station? the water treatment station? was just up the hill behind me. I wonder if this is a beach that anyone ever uses for anything. It has the feel of an afterthought, really - but I bet in the summer, people use it.

At any rate, it was a gray old day, and I found I really liked it. Love the sky, and the gray sweep of the beach. Seagulls squawked at me, and one guy came along and let his dog run here.

Minutes after I finished the painting, a snow squall blew in. Whew!
By carrie jacobson - April 10, 2011 7 comments:

Windy Day in Bozrah
Oil on canvas, 10x20
Please contact me for price and delivery options
Sheesh, it has been a dog's age since I painted in plein air! And it was so windy on this first outing. But still, it felt great to be out in the sun, hanging onto the canvas, remembering why I love painting outdoors so much - and then putting the new techniques in play - I had a blast.

I am glad to see that the big field, little house streak is still alive and well in me, and that my eye still responds to it!

I really like the shadows in this one, and the edge where the shady part of the (admittedly tipping) house meets the bright part.

Repost: The Fog Is Rising 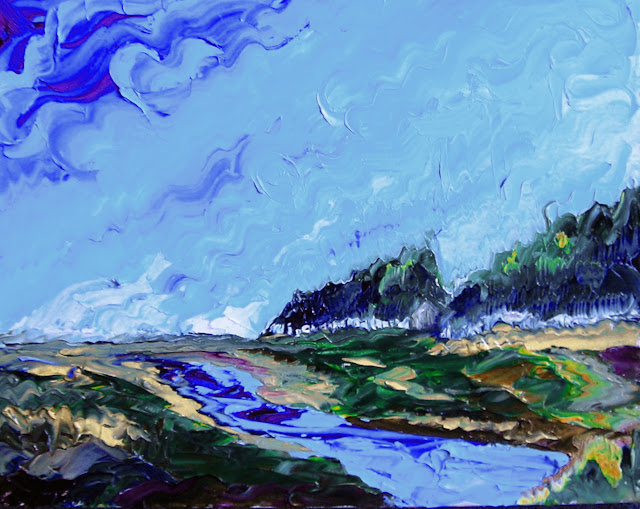 In a way, I'm glad when I make a painting that doesn't make me happy. It means I am trying something new, or that something is going on with me - it means that change is on the way.

This is a painting I made in the midst of the sun and moon stuff. It was my attempt to do the same sort of thing I was doing, but with different shapes.

I know there's something here - but whatever it is, it's not in this painting. Still, this is an interesting piece, with movement and a fluidity that's coming directly from those other paintings. 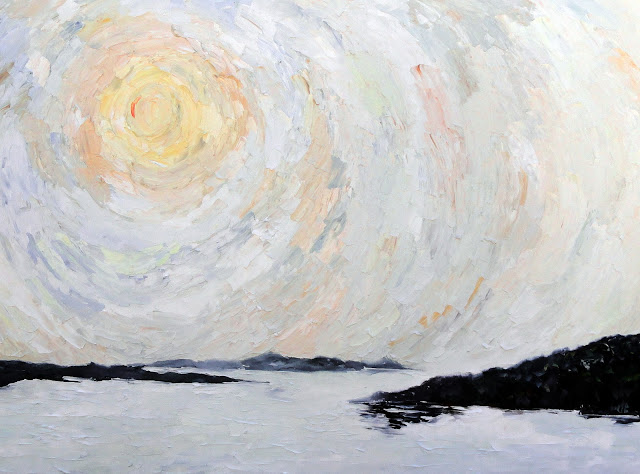 Here's one thing I do know: Getting good pictures of these paintings is difficult. I don't know why, really, but my photos of these paintings are not showing the paintings to their best advantage. The dark points of land are not black in my paintings, as they look here, but dark blue, and purple and green - dark, yes, but not black.

So I will try again, but for now, this will do. I will bring these paintings to the Paradise City show in Northampton, Mass., Memorial Day weekend, if you want to see them in person.
By carrie jacobson - April 04, 2011 2 comments:

The Moon Had Turned to Gold 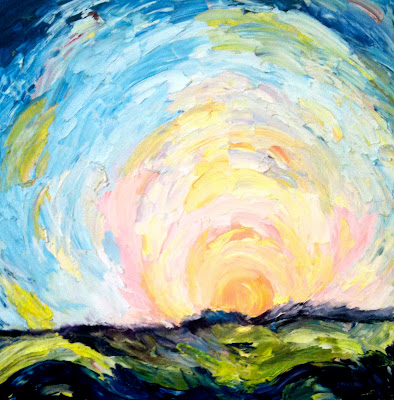 The Moon Had Turned to Gold
Oil on canvas, 24x24
Please contact me for price and shipping/delivery information
I still don't know where all this is leading me, but I do know that I'm loving it.


Part of me says - just stop! Stop with these suns and moons, enough already. The other part of me says - see where it goes.
And so today, I am seeing. I am listening hard to the whispers of the wind, or the universe, or the muses, or god, whatever force is greater than me, and clearly taking me somewhere. I am listening, whether the voice comes in ideas, or dreams or through people or images, I am trying to sort the courage from the fear, and stride ahead.
By carrie jacobson - April 03, 2011 2 comments: