Riding Through - And Getting to Tubac 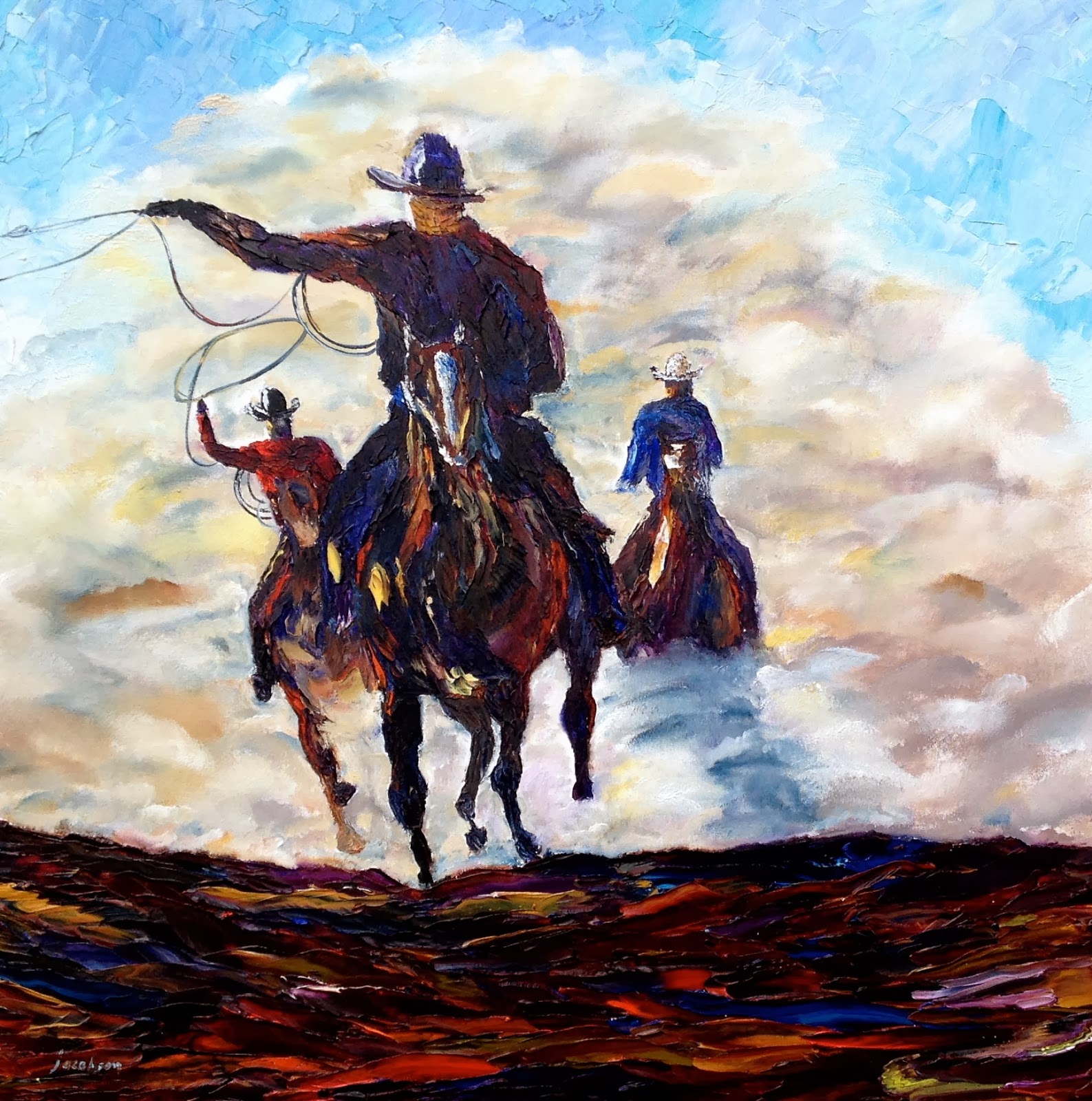 Riding Through
Oil on canvas, 30x30
Please email me for price and availability

Yes, this painting is like another I did recently, but this one is on a white canvas, as opposed to a black canvas. I thought that what I loved about that first one was the black canvas, and so I was hesitant to try it on white, but I wanted to see how it would work. And I love it! What do you think? Which do you prefer?

***
I MADE IT to Tubac, AZ, in a marathon four-day drive. I left Wednesday around 10 in the morning and got to my dad's place Saturday around 8 p.m. Texas was again the longest part of the drive, physically and spiritually. But overall, it was pretty easy. I'm here for a few days before heading to Indio, California, for the Southwest Arts Festival, which starts on Friday.

The first show of the season! I'm pretty excited.

THE SPONSOR LIST for this trip has grown, and I couldn't be happier. It makes a huge difference to know that I already have a bunch of paintings sold - and gas money in my pocket. I love knowing that the paintings I am making already have homes. It makes the experience, which always is one of joy, even that much better. 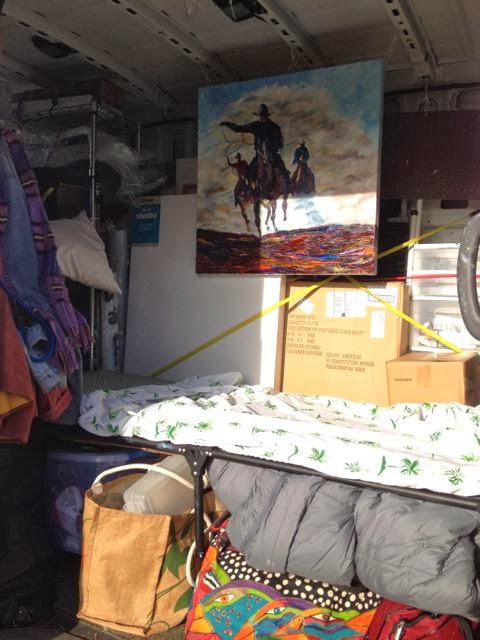 Here's the van, all packed - with "Riding Through" still drying!
Think I brought enough stuff? 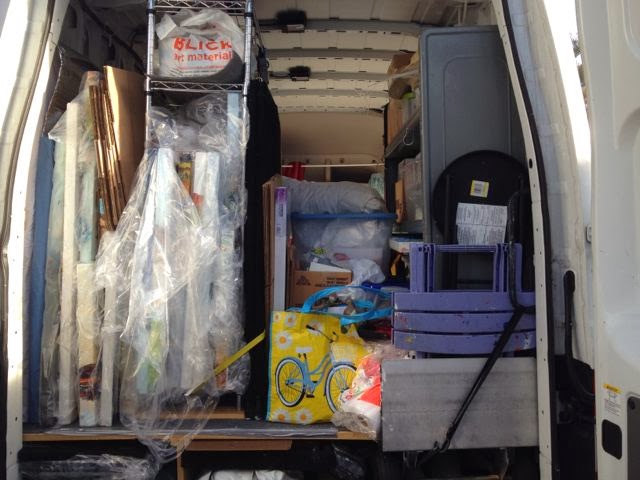 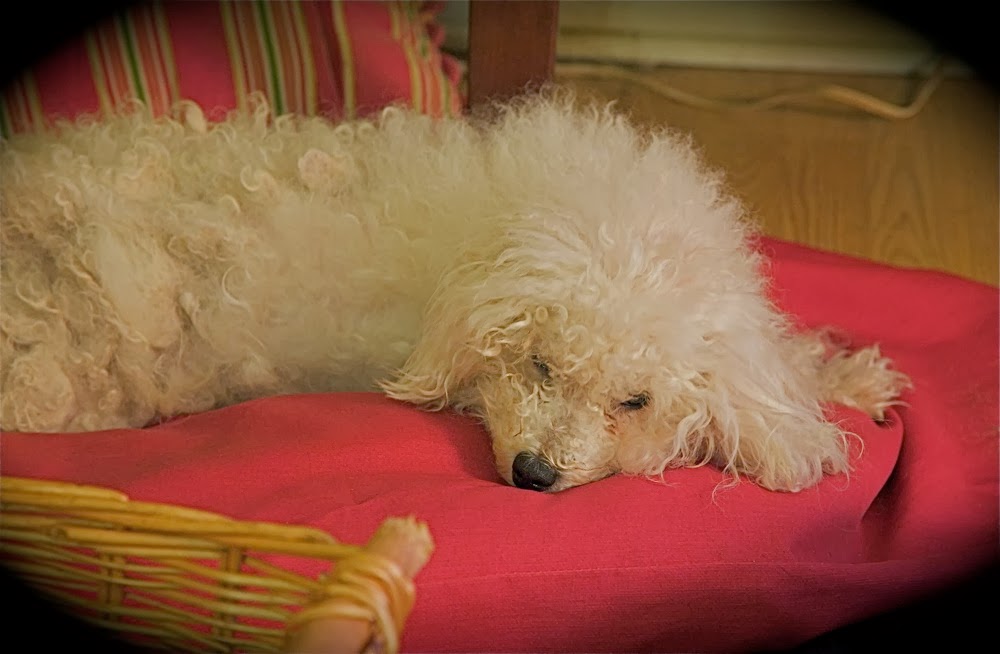 Yes, my dogs again. That's Woody at the top and Jojo at the bottom. I miss them! Peter titled these "no ambition," and I think that about says it all.

Bringing 'Em Home - and Getting Ready to Leave Home

Bringing 'em Home
Oil on canvas, 20x60
Please email me at carrieBjacobson@gmail.com for price and availability

I have to say that I am loving these cowboy paintings! It's fun to paint them, it's fun to watch them come to life, it's fun to think about them, too.

I love this one, but am a little on the fence about the dust. There was dust in the photo I was working from, and the dust was in the places I've painted it here - but it looks a little strange to me. What do you think?

***
THE COWBOY PAINTINGS are coming with me to California, yes! And as you can tell from the photos below, practically everything else in the studio is coming, too. Peter and I spent the entire day yesterday packing the van, and we're not done yet, though we are close. I'm hoping I'll have room for the cot, though I realize I might not be able to set it up until I unload some of this stuff at my dad's house.

More sponsors signed up yesterday! How very exciting! There are still a few full-sponsor slots ($125), one Angel spot ($350) and so far, no one's taken me up on a hero sponsorship, at $750... To see the sponsor levels and the goodies and art you get, click here. 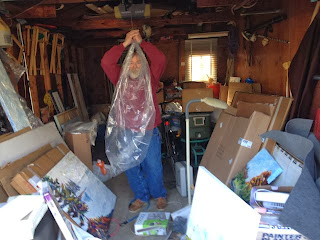 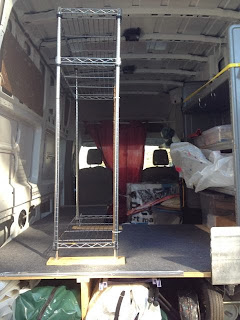 Here's the van, clean, newly carpeted, ready to be loaded. 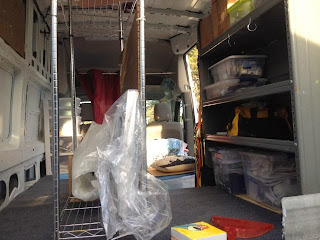 And so it begins! The first painting is loaded on. 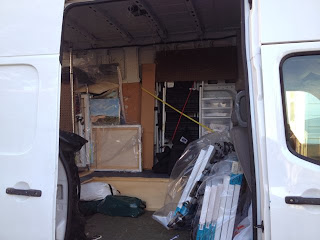 Here's the view from the side door at the end of the first day of loading. 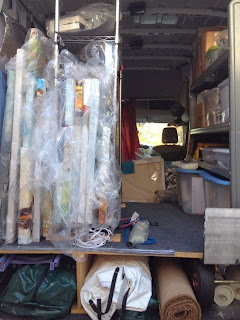 Here's the view from the back... Hardly looks like it could have taken the whole day, does it? 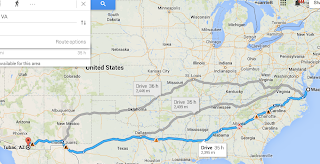 At the request of one of my sponsors, I'm posting the route I'm planning on taking to Tubac. I trust the accidents noted on the map won't be there when I get there! It's five hours from Tubac to Indio, Calif., and I'll post that route as I head out to the Southwest Arts Festival. 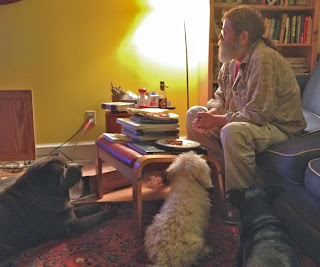 Here's most of the gang, waiting for a treat from my beleaguered husband.

Lonesome on the Trail - and Stormy on the Eastern Shore 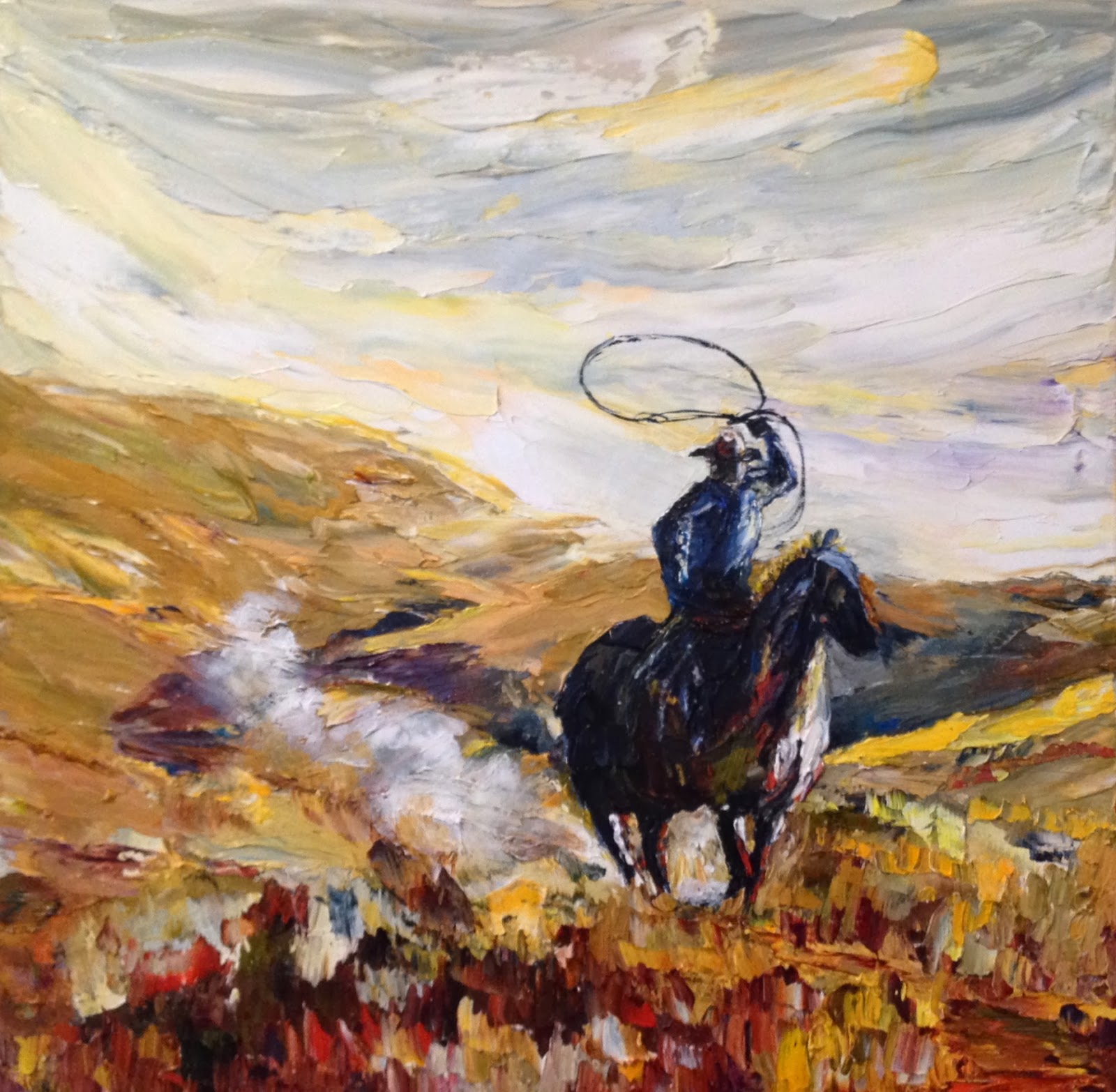 Lonesome on the Trail
Oil on canvas, 20x20
Please email me at carrieBjacobson@gmail.com for price and availability

I was in my studio yesterday afternoon, finishing my final cowboy painting before I start packing the van, when a Weather Channel alert popped up on the phone.

"Severe thunderstorm warning" for Wachapreague, until 4:30. It was about 10 after 4.

About a minute after the alert, the sky grew dark, and the wind picked up. And then the sky got darker and darker and darker, and the wind got stronger and stronger and bigger and louder - and the rain began absolutely pelting down. Pinecones banged explosively into the roof and sides of the studio. The wind flung branches down onto the roof. The day grew black, absolutely near-nighttime dark, and the power flickered off and then back on.

Honestly, it was scary. I'm sure I should have gone into the house, and next time I will - though by the time I realized this, it would have been dangerous to cross the yard, the way those pinecones were smashing down. So I stayed in the studio, got as far away from the windows as possible, and waited for it to pass. And it did.

Later that evening, I found out that there had been tornado watches and warnings, and sightings of what might have been tornados or waterspouts throughout the area!

SATURDAY WAS A BIG DAY for sponsorships for my upcoming California Calling Painting Extravaganza, with three more coming in! Yay!

I am still planning on setting out on Wednesday for California!

***
THE DOGS I FEATURED as Dogs of the Day in my most recent post  - after forgetting who sent them to me, what their names are, or where they live, sigh - are Brutus and Bella. They belong to the son and daugher-in-law of Joe Keller, Heather MacLeod's husband.

The pink structure holding them in is, as an impressive number of you knew, a Little Tykes Kitchen. Heather says, "It serves as a jail gate when the dogs are banished to the real kitchen because they peed on the floor when company came."

It's great to have dogs, isn't it? 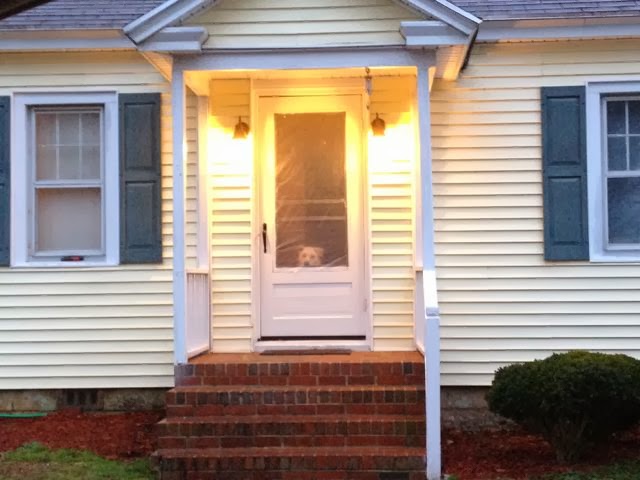 Yes, I am a sucker for dogs waiting for their humans to come home. This is Big Head, a dog about town here in Wachapreague. You've got to love a dog whose name is Big Head, right?
By carrie jacobson - January 12, 2014 No comments:

Cutting In - and Heading Out (Soon!) 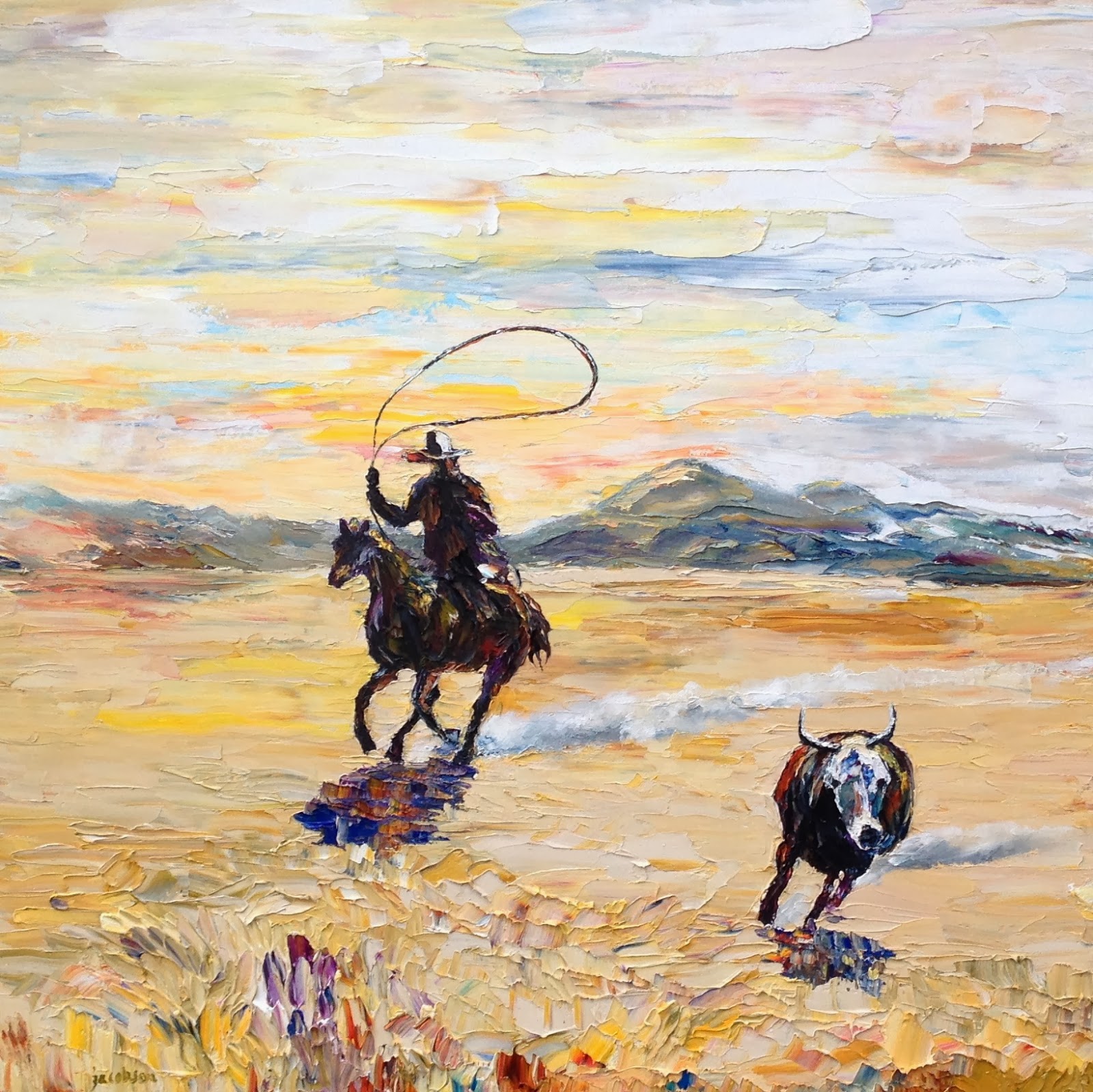 Cutting In
Oil on canvas, 30x30
please email me at carrieBjacobson@gmail.com for price and availability

Five days until I leave for California! And I think I have seven days' worth of work to do between now and then. It will get done or it won't, and it will all shake out the right way, I'm sure.

If you're considering sponsoring me, there is still time, and there are still slots left. And you know I'd love to have you along for the ride! Click here to go to the sponsor-me page on the Jacobson Arts website.

I've built in some extra travel time, just in case the weather is bad - it's been pretty awful for most of the winter so far. This time, I'm driving straight out, and starting to paint once I get there. I am very excited! 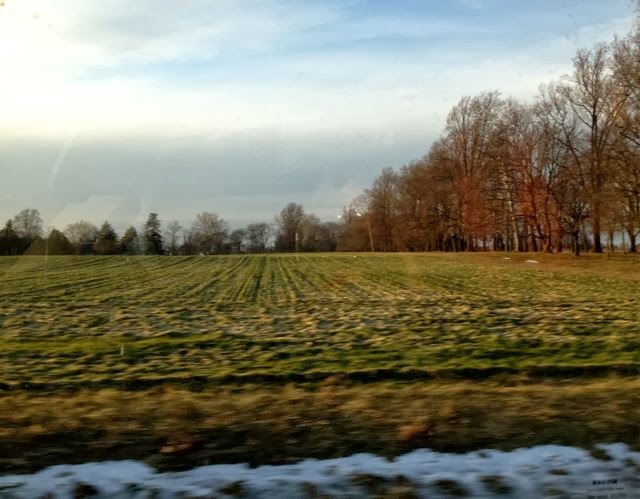 Can you see spring? It's not the field - that's winter wheat, I think, or clover... something they grow down here in the winter. But I'm seeing the small branches of trees starting to turn red.
It's the first sign of spring! 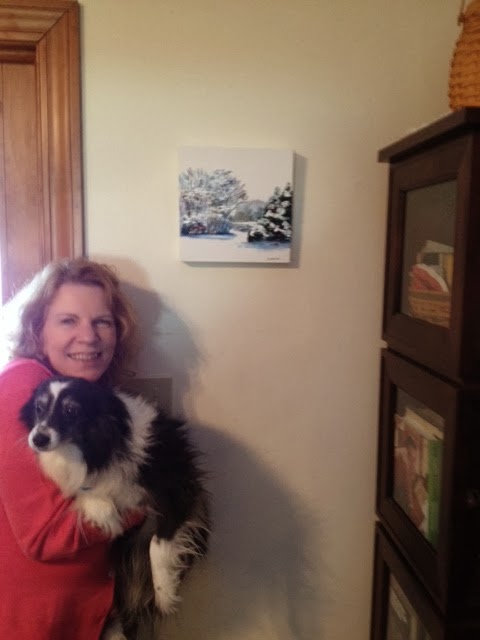 Here's my friend Catherine Lenoci with her dog, Georgia. They're standing in front of "Winter's First Snow." Catherine sent me a photo of the first snow of the year in Connecticut, and I made the painting,
and she bought it. How's that for perfect? 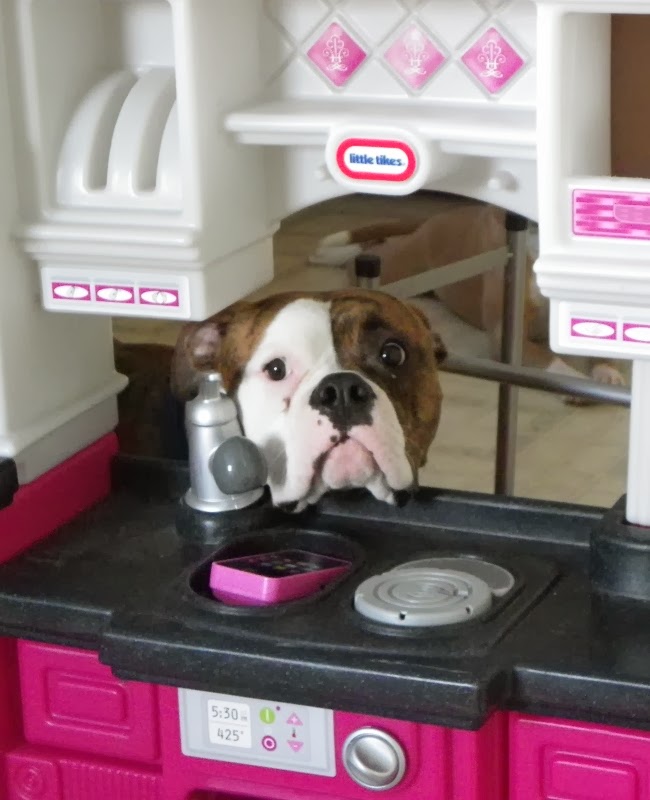 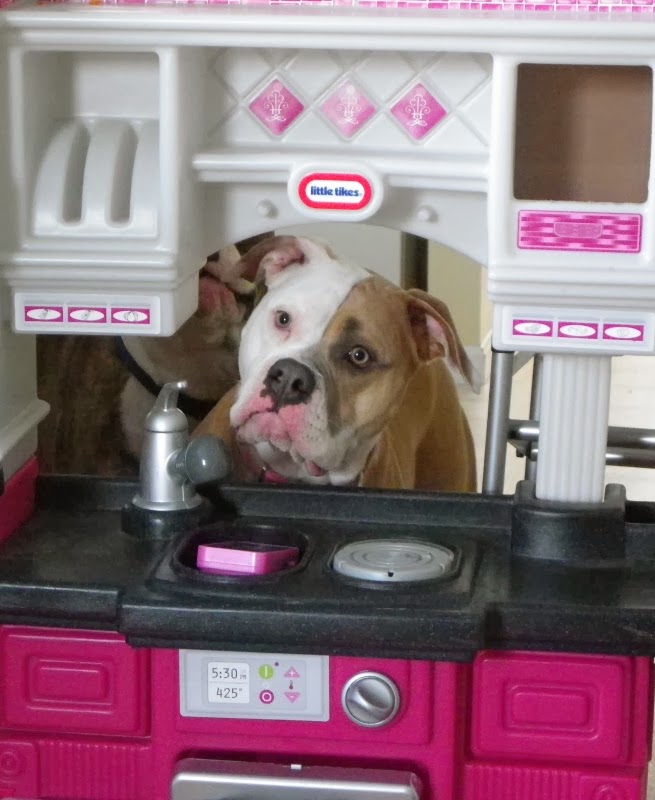 Aren't these great-looking dogs? I love them! But I can't remember their names, or who sent them to me. If it's you, I do apologize! And if it IS you, would you please drop me an email
so that I can correct my deficient memory?

And while you're at it, please explain what that pink thing is that's framing the dogs' faces. Thank you!

Archie - and Please Sponsor Me! 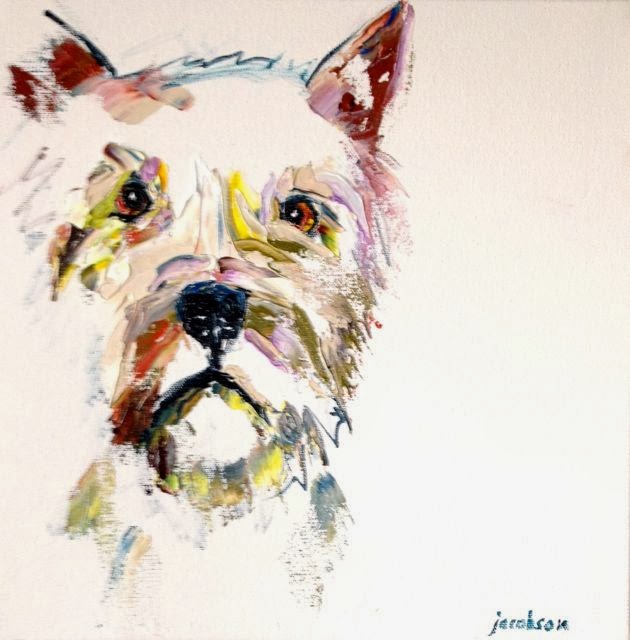 In just about a week, I leave for Indio, California, and the California Calling Painting Extravaganza! I am quite excited, and hoping that more of you will join the good folks who are already sponsoring me.

Sponsors get art from the trip - and more! Everyone will receive a calendar of paintings I make on the road. You'll get access to the sponsors-only blog, which, this year, will include a number of videos, if all goes well. Sponsors who pitch in $125 or more will receive original art. And everyone who sponsors me at any level gets a chance to win a painting of their choice - from the trip or not.

Here are some testimonials from sponsors of the Tubac and Back trip, which took place in March 2013:

Heather MacLeod:
I loved the Tubac and Back road trip. My first real road trip was a painting trip to Canada with Carrie in 2010. It was a blast. My next road trip was a honeymoon cross country trip in 2011, through some of the very same places that Carrie painted. So the Tubac trip was a double pleasure for me. I loved looking at all of the paintings posted together at the end of the trip, and had a hard time selecting a favorite. I decided on the sweet Saguaro Cactus. I love it. I am excited to be a part of the California Calling trip as a sponsor, and hope to be an active painting partner in a future trip!

Kathryn Yamartino:
Sponsoring Carrie's 2013 trip mad me a part of something, a small network of people supporting and following an artist whose work we love! Through the trip blog we learned about her on the road adventures and saw the paintings fresh on the easel!

Selecting our paintings at the end of the trip was filled with anticipation and excitement and was way better than any of the other "reward" experiences in crowd funding.

My only wish? That family and friends had given me the gift of a sponsorship too! Two sponsorships would have been twice the fun! Hint hint!

Carrie's work moves and inspires me. The freedom and movement in her paintings draws me in and dares me to rediscover it again and again. And best of all, Carrie is as generous and passionate a person as she is an artist.

I am happy to have progressed from an audience member to a participant of Carrie's road trips by becoming a sponsor. Last year's sponsorship got me an amazing painting of a downpour over Albuquerque. We have been to many of the same places in the country, and her paintings bring me back to each locale. They ring true in my heart.

To read more about the different levels of sponsorship, and what each brings you, and to sign up, click here: http://jacobson-arts.com/Jacobson_Arts/sponsor_me%21.html 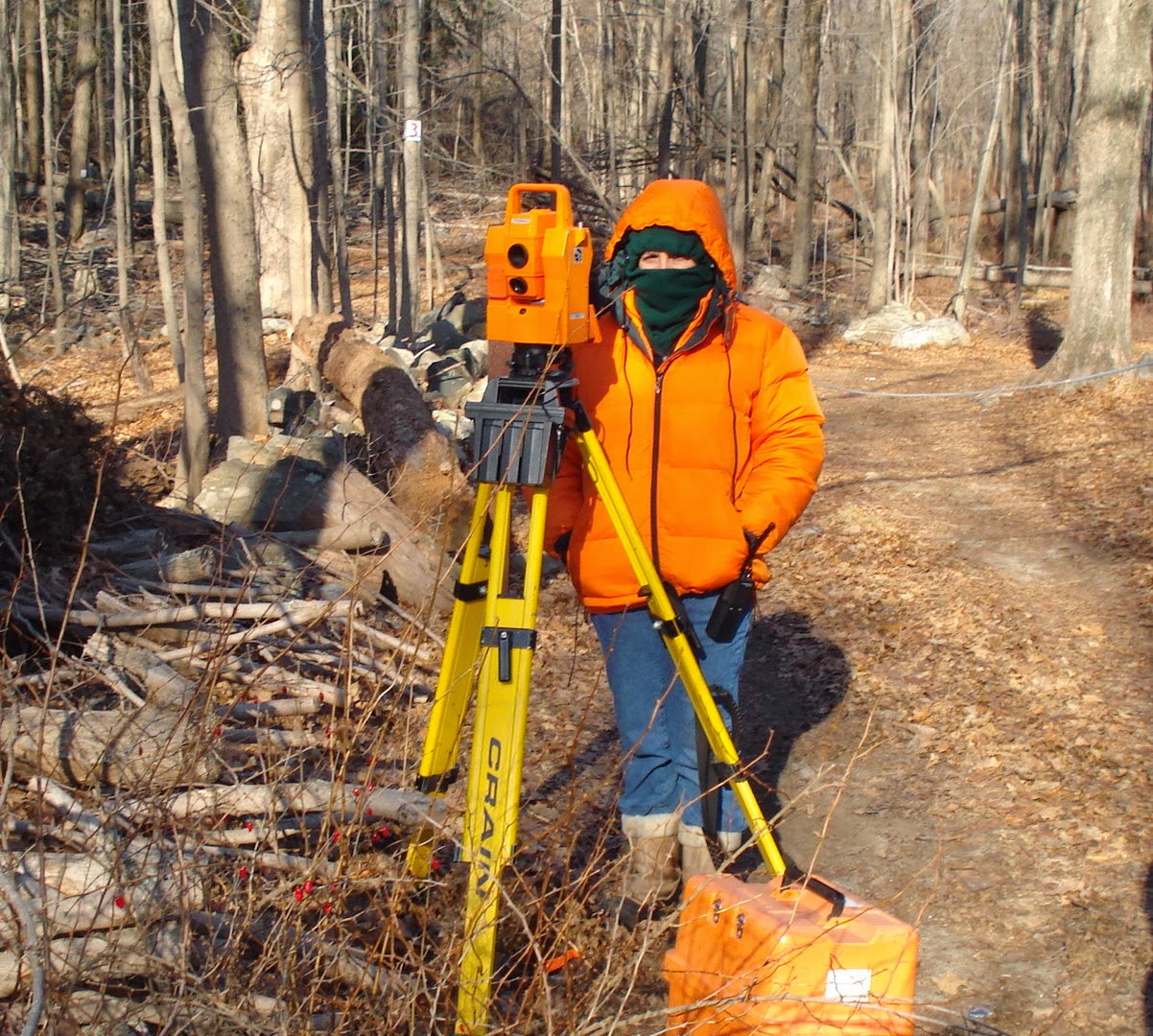 Here's Cynthia, one of my friends, dressed for a happy day of surveying, in Arctic temperatures. 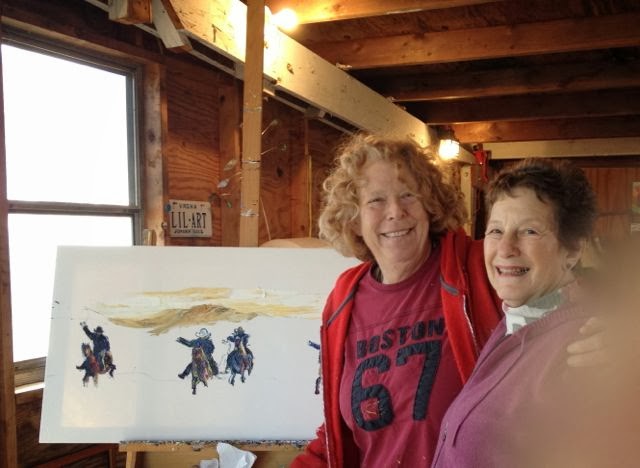 Here's my friend and collector Nancy Russell, who stopped by beautiful
downtown Wachapreague for a visit recently. 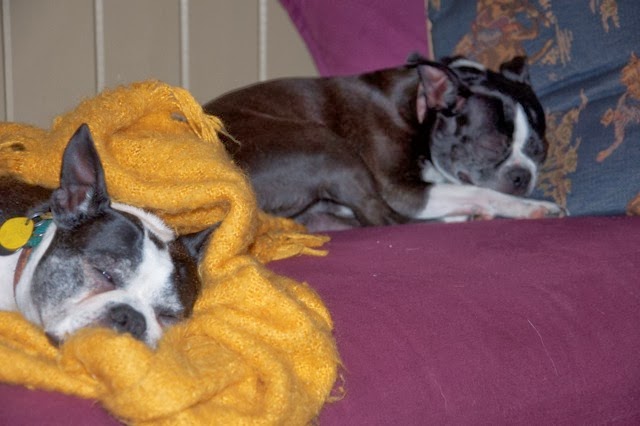 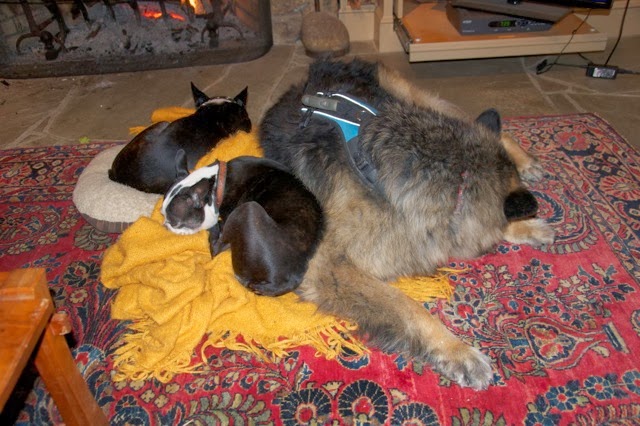 Tucker and Emmi, top, are visiting Cynthia and Kevin and George and Zack, bottom. Looks like everyone is having a rousingly exciting time!