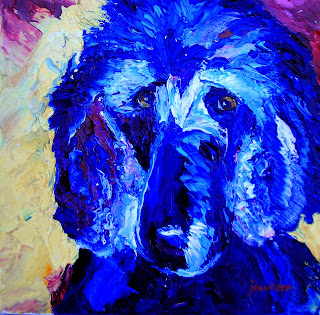 Snoopy
Oil on canvas, 12x12
Commission
Dusk was falling when I pulled into the driveway yesterday and saw my husband walking a spaniel-looking dog I'd never seen before.

He was a good dog, this black and white fellow, gentle and polite and calm. He had a nice collar, too, and so we figured he was an escapee, owned by someone in the neighborhood.

We loaded the dog in the van and set off into the sweltering dusk.

Our first stop was the trailer across the street. There, Byron introduced himself. He looked to be about 30, was retired from the Navy and working at EB. We'd never met, though he'd been there for a month or so. He didn't know the dog, but it was good to meet him.

Our next move was to pull in to the driveway of the Avalonia Nature Conservancy trail that runs alongside our property.

A teenager sitting on a rock and (surreptitiously, I am sure) smoking a cigarette, identified himself as Mike, one of the foster kids of our Christian neighbors. He didn't know the dog, but said that in the third house on the right on the street across the way, there were dogs. Maybe it was one of theirs, or maybe the guy would know.

Well, it wasn't one of theirs, but Andy said he thought it looked like a dog he'd seen with Roberta, who lived at the end of the road.

There was no answer when Peter rang the bell, but Peter went around back and there was Roberta, in her 60s or 70s, smoking a cigarette, hyperventilating, peering into the woods and calling.

She took one look at Peter and asked, "Did you find my dog?"

"How did you know?" Roberta said.

"I'm the Dog Santa," Peter said, and at this, Roberta nearly collapsed, in worry and gratitude.

She had adopted Charlie, an older dog, just a few days earlier, and while he is gentle and calm around the house, he chases squirrels, and it was this that had led him to his adventure.

So all is well that ends well, here in Dogland.

If you are in the area over the weekend or Monday, stop by Olde Mystick Village Shopping Center. I'm participating in the "Meet the Artists" show there, and it looks like it's going to be fun!
By carrie jacobson - September 03, 2010

Email ThisBlogThis!Share to TwitterShare to FacebookShare to Pinterest
Labels: snoopy

A wonderful story and a happy ending too.

What more could I ask? GREAT ART!!!

It's all here... Snoopy is truly part of your "blue" period. And yet he sings with the blues in the most cheerful manner.

Soon I shall post photos of the shop/studio progress... My back and my feet are killing me.

Thanks, Patrice! I was so happy when we found Charlie's home. It really was a wonderful ending. And yesterday, Roberta and Charlie came to visit. I was out, but Peter was home - so we have new friends in the neighborhood, too.

I'm so glad you like Snoopy, too. In real life he's a little less blue than in the painting - but I do like him. Another memorial portrait, sadly.

I can't wait to see pix of your studio!

What a lovely story! Your animal portraits are always so amazing. Love your use of colour and texture.