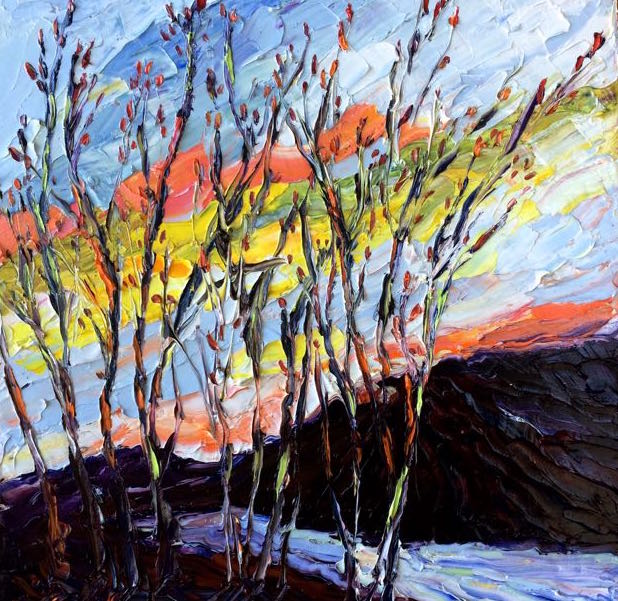 A few years ago, a friend and I started exchanging photos of the sky every day. It started because we'd found ourselves fascinated by the sky - her by the vastness of it, me by the colors and patterns, the stuff in the sky.

We set out to exchange the photos for a year, but by now, it's three, going on four, I do believe. It's been a wonderful project, allowing me to see a part of her world, through her eyes, every day. In some ways, I've learned to see like her, a little bit. The project has helped me develop a new sense of vision, a new perspective. And it's been fun. Some days, the sky where she's been is exactly the same as the sky where I've been - even if we're half a world apart. Some days, the skies could hardly be more different - even if we're only a couple hundred miles apart.

This is a painting I made from one of her photographs. I love the sense of dawning light in it, the bright colors in the sky and big dark humps of hills. And mostly, I like the touches of red at the tips of the tree branches, a promise that spring is indeed on the way. 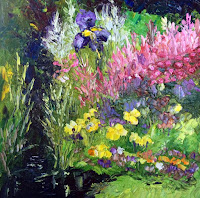 I'LL HAVE THE "Oxoboxo Morning" painting, and some of my new florals, like the one to the left here, at the Paradise City show in Marlborough, MA, March 24-26. The show is in the Royal Plaza Trade Center. Marlborough is on I-495, about 45 minutes west of Boston, and 30 minutes east of Worcester. You can click here to get directions, and here to get a coupon for $2 off the admission fee. I'll be in Booth 404! I've done this show twice, and so I can tell you that it is a beautiful show, much like the one in Northampton, but smaller. And without the great Indian food... but I will get my fill at the show in May!

I saw this sign Vinton, Louisiana, on a beautiful road lined with Spanish-moss-hung live oaks. People were fishing on both sides of the road, a salt marsh on the east and
a beautiful, fishy creek on the west. 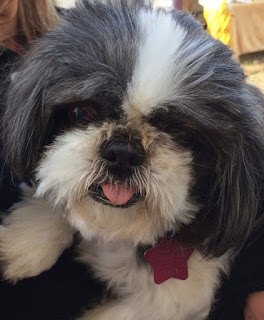 The show in Englewood, Florida, was no good for selling art, but it was great for seeing dogs!

"An artist's only concern is to shoot for some kind of perfection,
and on his own terms, not anyone else's."