When it is finished? 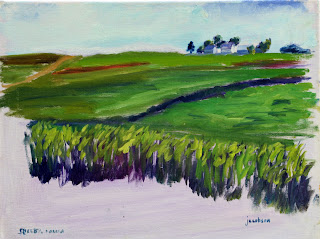 Shelby, Iowa. Note the gap between the edge of the painting
and the edge of the image.
The talented and renowned Mary Evelyn Whitehall accosted me about that issue last month as we were setting up the show at the Wallkill River School gallery. They're not finished, she insisted. The gap between the painting and the frame, especially if the frame is dark-colored and the canvas is a light color, is distracting, she insisted.

Take a look at the top of this post at "Shelby, Iowa." It's one of my favorite paintings, and has one of the largest gaps, one of the most unfinished looks.

I left it that way in part because during the Wisdom Trip, I fell into leaving it that way. It started one day when it was hot and windy and I was being bitten by bugs, and I thought, well, the very foreground isn't that interesting anyways, so I will leave it for later; finish it up in the hotel tonight.

When there were still leaves on the trees, I started a painting of our back field. It was late October or early November, and as the sun set, it turned the field a golden pink. I painted a small piece, and didn't like it. So I painted a big one. But the sun set far too quickly, and for the very first time in my painting life, I didn't finish the piece.

It was about half painted. I'd gotten the far-off trees, and the closer bushes. I'd gotten the field grasses, and had sketched in some tall foreground grass. But the rest, nearly a third of the canvas, was white.

In time, I fell in love with the unfinished look of it. But just a couple days ago, I filled in some of the remaining space. I still like it. It's still unfinished-looking, but not as starkly so as it was, originally.

It's too gray a day to take a photo of it, but I will, as soon as I get back from New York. I'd like to hear what any of you think.