Miles and miles of Texas 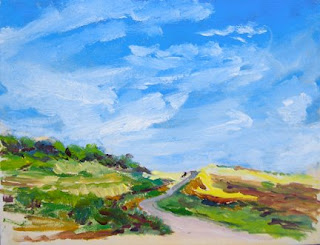 Hill Country, Texas, outside Weatherford. Oil on stretched canvas, 9x12. sold
Texas has surprised me. Eastern Texas is green and verdant, with hills and lakes, fields and meadows and enough trees that I drove for an hour with the scent of a paper mill in my nose.

Dallas is a beautiful city, at least as seen from the highway. The highway itself - I-635 - was beautiful, if a highway can be beautiful. It seemed to soar and swoop, in wide white strips. Stanchions were made of concrete, and toned in desert colors, soft red and deep green on a smooth tan background.

And then, as east Texas merged into west Texas, the greenery dropped away, the land flattened out, and wealth sunk into visible poverty and decay. The temperature rose, reaching 92 and staying there for most of the afternoon - and this on April 8.

I passed whole towns that looked deserted. I drove by house after house that was empty and crumbling and entirely isolated, and I had to wonder what the people who lived there had thought would happen. What did they think their lives would be? What future did they see for themselves when they built these houses, when they moved in? They must have had dreams, and hopes and plans, crumbled now, like the places where they lived.
By carrie jacobson - April 08, 2009

Love this painting Carrie. You really caught the essence of the place here.
I'm enjoying your travel diary! :-D