I painted with flowers, making the bouquets and corsages, and the arrangements for the head table
at Erika and Jon's wedding.
My stepdaughter Erika has now been Mrs. John Mowrey for more than 48 hours, and Peter and I couldn't be happier.
The wedding took place on Saturday, at Christ Episcopal Church in Westerly, R.I. Erika's friend Margaret was her bridesmaid, and Erika's daughter Samantha was her maid of honor. Jon's daughter Jenna was the flower girl, and Erika's son Ashton was the ring bearer. Jon had one groomsman, Bill Goins, and Dennis, Samantha's boyfriend, served as the usher.
Peter and I walked Erika up the aisle and gave her away.
Those were the outlines. What filled them in was truly beautiful, truly moving.
The day had been cold and rainy, thick with thunder and lightning and heavy with downpours. But as 2:30 neared, the clouds moved away.
Erika dressed in the rectory, and then the bridal party was to walk down Elm Street to the front door of Christ Church.
There we were, four women and a girl, in beautiful, shimmering dresses, holding beribboned bouquets,  and as we opened the rectory door and stepped out onto one of the most beautiful streets in America, the day cleared, and we walked on sunshine and laughter and love, as drivers honked their horns and waved, and a blessed, sacred union waited inside the church.
I have never had such a walk, and never will again. It was as close to perfect as any 100 yards could be. If my mother were alive, it would have been absolutely perfect.
The bridesmaids walked up the aisle. Jenna and Ashton walked up the aisle. Then the music changed, and the doors opened, and Peter took one of Erika's arms and I took the other, and to my absolute amazement, I began to weep. We walked together, the three of us, who have gone through hell and back together, and with joy and love and sadness, we gave Erika to Jon.
The ceremony finished with applause and music, and from there, the night went on, with great fun, and good food, and music and dancing and friendship. It was a beautiful, moving day, which I will remember and cherish for the rest of my life. 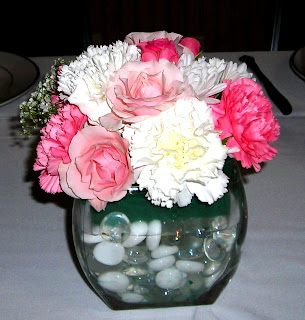 I made two of these small arrangements. 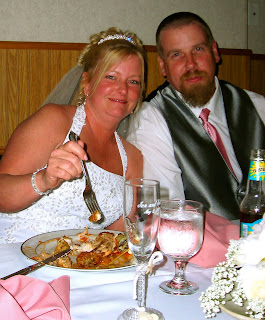 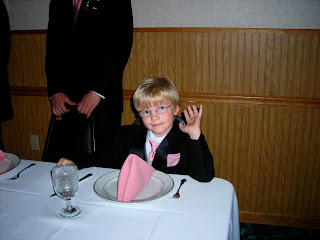 Ashton, our 7-year-old grandson, who took most of these photos 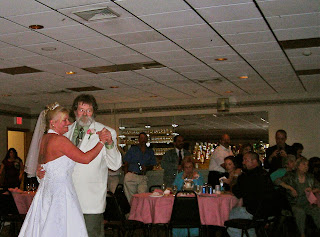 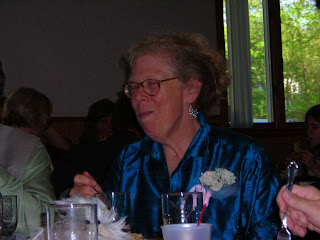