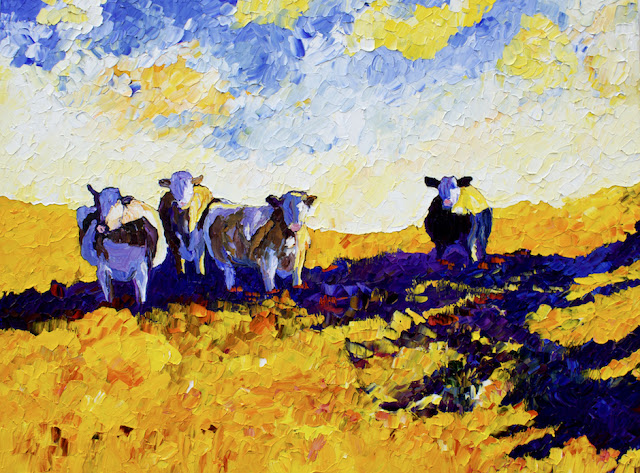 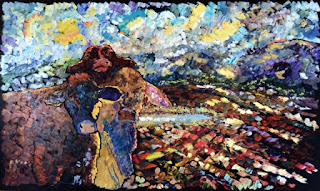 Then, the idea of painting cows came to me. And why not? They're big, interesting, colorful. I'd made a couple small cow paintings, and enjoyed making them. So I set about it, and had a great time.

But, I thought, I will drag this painting around with me for the Rest of My Life. No one will ever want to buy it. Who would want a painting of cows?

Turns out, lots of people would. People like cows. For all of us who are not ranchers or farmers, cows are the familiar, but also The Other. They're such a huge part of America - in the fields, near the roads, as beef and as milk in all its forms. Much of the time - particularly in the East - when you stop to look at a cow, the cow stops to look at you.
That one canvas, that one decision, opened a whole world to me, and it's one I enjoy, and am so grateful to have found! 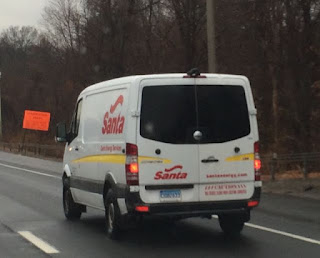 So Santa has a cool van now! Bet it cuts that carbon footprint... 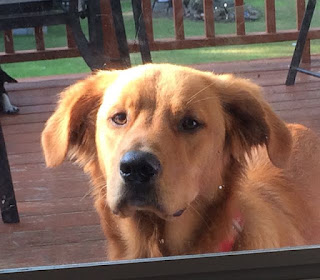 Erika and Paul's dog Benny had his birthday on Christmas Day. He's a full year old now,
but I'm pretty sure he will always act like a dippy puppy.

***
A Final Thought
One of my favorite books in the world, and one that I've mentioned often in this blog and to fellow artists, is "Art & Fear / Observations on the Perils (and Rewards) of Artmaking," by David Bayles and Ted Orland. I've received permission to use quotes from the book as my "Final Thought" throughout the month of January, so here goes:

"Artmaking involves skills that can be learned. The conventional wisdom here is that while 'craft' can be taught, 'art' remains a magical gift bestowed only by the gods. Not so. In large measure, becoming an artist consists of learning to accept yourself, which makes your work personal, and in following your own voice, which makes your work distinctive."