Lining Up the Putt 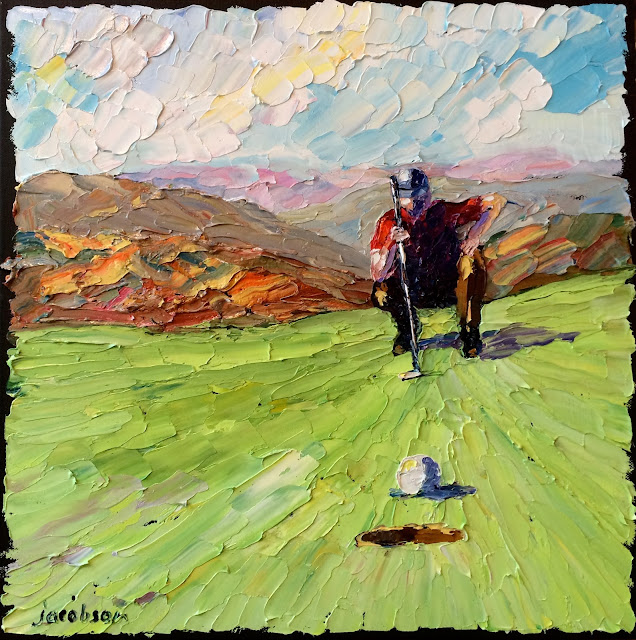 Lining Up the Putt
Oil on black canvas, 16x16
Please click here to email me for price and availability

So what about prices? What are my prices generally, and why don't I just put the price of the painting in the line above?

I price my paintings generally at $1.25 to $1.65 per square inch, and then I adjust. Up, if the price seems ridiculously low. Down if it seems unrealistically high.

I used to price paintings according to what I thought they were worth, but this was endlessly confusing, Tiny paintings would be more expensive than huge ones. Buyers didn't get it, so, taking advice from people who'd been selling paintings for years, I went to the square-inch method. Many painters use this method, and my per-inch prices are lower than most of my peers'. And that's OK with me. I'd rather sell lower and make more paintings!

So there's a starting point. But there are many variables beyond that. if someone buys a piece before I put it in a show, they generally get a discount.

For a while, I had a page called "The Hot Nickel," where I'd put paintings that had not yet been to a show. (The title comes from the saying that a hot nickel is often worth more than a cool dime).

That page shortly became disastrous, as I'd forget to put paintings on it, or, worse, forget to take them off once I'd put them in a show.

There are some other discounts I generally offer. If you come to the studio to buy a painting, chances are I'll offer you a discount. The less I have to do to sell a painting, the better.

If you pay with cash, I'll offer a discount.

If you buy more than one painting (except for the smallest ones), I'll offer a discount.

I'm generally open to negotiation, taking all the above into account. Sometimes there's a painting I absolutely adore, and am convinced is worth every cent I am asking, and I won't budge. Sometimes I am just sick of a painting, or I don't like it, or I'm in a mood, or I'm having a terrible show or a wonderful show - and if you catch me at one of these times, chances are I'll give you a big discount.

Another reason I don't put prices on the blog or the website is that I have a terrible memory, and often forget to take a price or a paypal button off a blog post, so sometimes, people inquire about paintings that are long gone.

And finally, galleries sometimes have different prices than I have. Sometimes they're higher, sometimes lower. I don't always know how a gallery is pricing a piece. I give them guidelines, but in the long run, I want them to sell the paintings, so I allow them some leeway - though I am tightening up, especially on the galleries that sell my pieces for less than I'd ask. 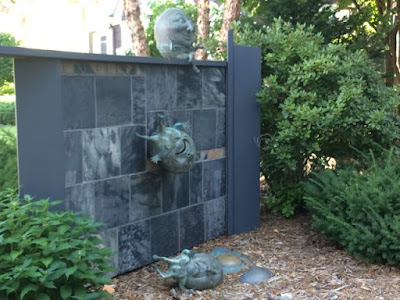 Isn't this great? It's Humpty Dumpty, sitting, falling and broken.
I saw this in a beautiful shady neighborhood in St. Paul this summer. 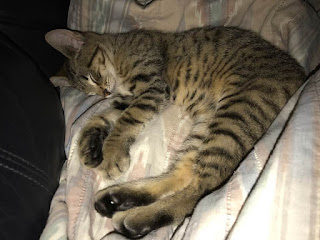 It's Kora, who lives with my friend Tiffany. I love her stripes, her dark feet and her long legs.

- David Bayles and Ted Orland,
"Art & Fear / Observations on the Perils (and Rewards) of Artmaking"