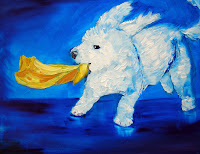 Woody. Oil on canvas, with a cool blue metallic frame


I have been painting, but I don't like the piece that's done, and the other just isn't finished. So this painting of Woodreau, well, it's an old one, but he's happy in it and and busy, and here, in real life, he just got yelled at for behaving very, very badly, and honestly, I'm feeling sorry for him. So I posted his painting - not that it will improve HIS day any, but will make me feel a little better.

I also posted it because I've been racing around since Sunday, much as anyone can race while sitting in a chair, working to find new ways to sell my paintings.

Here's where the rubber meets the road. If I'm going to be able to do this, if I'm going to make a living painting, I need to find a way to sell five paintings a week, at my current prices. If I can pull in about $400-$500 a week, I can keep painting. So all I have to do is figure out a way to do that.

I spent the entire day Sunday attempting to open a seller's account on eBay. This morning, I had to laugh - I received an email from eBay, telling me I could begin selling in three easy steps! Hah! In what universe? Surely not in the one that revolves around 109 Whalehead Road, Gales Ferry.

The details of my tortured day are probably unimportant. Let it suffice to say that for hours - hours! - I continued to end up on a PayPal page that demanded I add a credit or debit card. I only have the one. When I tried re-entering the info, thinking that maybe it hadn't taken the first time, I was told that I was duplicating information. Yup.

Tried it another way, and was told repeatedly that technical issues were preventing me from opening an account at this time. So-called experts at eBay (who have such bizarre grammatical problems that I began to think they were, perhaps, machines) first couldn't help, then told me it would take four hours to fix the technical issues. Four hours later, I was told it would take 24 hours. Twenty-four hours later, I was told that if I paid $5 to get "verified," the problems would all go away.

Well, it has, finally! You can search for Art, Direct from Artist, or "First Snow - plein-air oil painting by emerging artist," or I guess you can search for me, carriejacobson56 - though I must admit, I tried that and couldn't find myself.

This morning, Elissa Englund, another friend, suggested I open a store on something called Etsy.com, and so I have. It was about a million times easier - and friendlier - than eBay. The stuff won't show up for 24 hours, but I'll let folks know when it does.

I am a little uncomfortable with the selling part of all of this - but you know what? It's part of it. If I'm going to make a living at this, I have to sell my paintings! And I feel a little tense at sending emails about all this to my friends. But the truth is, if they - or someone they know - is going to spend $100 on a gift for themselves, or for a friend or family member, how much better is it to spend that $100 on a painting by someone you know, than to give it to, say, WalMart or Kohl's or Macy's?

In the end, it comes down to that, at least in my mind. And from there, it's simple. I'd rather spend my money on something that a friend of mine has made than on something a store has bought from a stranger, or an underpaid child-laborer in Indonesia, and then trucked halfway across the planet.

Once I reach that conclusion, all I need to do is find a way to get the paintings in front of people, and give them one little push. That's right, just wave that yellow towel in front of them, wag my little tail and romp on!

Thanks, Michelle! I'm so glad to know you. And so glad you're reading my blog.