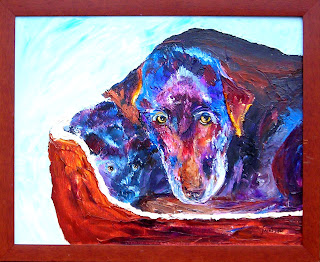 Friends
Oil on canvas. Not for sale
My sister's dog, Mac, is an old, dear fellow. He seemed ancient when Laurie and her family adopted him, years and years ago, but he has lived on, in his creaky but surprisingly athletic way, all this time. He has run and walked with Laurie in the early mornings. He has played with three kids, guarded two houses, and eaten his way through a mountain of food intended - and not intended - for him.

Mac has had his troubles of late. He ate something horrible that nearly killed him around Thanksgiving. Now he has cancer. It looked like his time was up a week or so ago, but he rallied, and has been happy and wagging ever since.

After he ate whatever it was, and before he got cancer, the family took on a puppy. Mac didn't like the little guy at first, but over time, the two have become friends. The friendship blossomed more or less around a dog bed that Laurie got for Beemer, but which Mac took as his own.

I cried as I made this painting, cried for the sweet dog that Mac has been all these years, and for this last sweet act of sharing. I cried for all the dogs I've ever lost, and all the dogs I've ever welcomed into my life. I cried for the friendship and the love that our dogs give us - and which I wouldn't trade, for all the tears in all the world.
By carrie jacobson - February 14, 2010

(((((((Carrie)))))))
There are so many lessons our critters can teach us about unconditional love. I know Mack is happy because this is how he wants to be remembered. Loved, able to love and thankful for all the people who have been in his life.

Hi, Sheila, and thanks so for the note. Mack is a great dog - and in what must be his last recovery, he is absurdly happy, wagging, loving, even walking again with my sister. But the cancer is doing its awful thing, in spite of doggie chemo, and much love from all who know him, including Beemer and my sister's third dog, too.

Your writing about Mack and the puppy - and about all the dogs we've loved - is a moving tribute, and worthy of tears at this monitor too.

I couldn't have children, but the animals who have been my friends and companions have shared selflessly and loved me unconditionally - something many people cannot do.

I forgot to say how much I love the winter landscape you posted previously, and I also want to thank you and Jill for the "high indeed" praise. We as artists are in this together!!

Hi, Patrice - Peter and I have no children of our own. His daughter from a previous marriage, Erika, has truly become my daughter - but I struggled and grieved for a long, long time about having no children of my own.

The dogs are our family these days, and that's fine with both of us. Their presence shapes our lives, and we spend a lot of time and energy and devotion on them - and they brighten my days, love me unflinchingly, and are in many ways, my best friends. On most days, I like the dogs better than I like most people. On almost every day, I'm happier spending time with the dogs than spending the same amount of time with most humans. (Except painters).

Last night, we got about 6 inches of snow, and the dogs burst out of the door for the morning walk - they were excited! they were gleeful! they romped and darted and rolled in the snow... one of the two who has to stay on a leash chased the other leashed one around and around me, and then used her Australian shepherd eyes to freeze one of the other dogs dead in his tracks... and then chased him to the end of her leash when he took off around the garage. ... Any my initial thought had been, "crap. more snow."

They teach me lessons every day.