Edge of the Sound, Madison 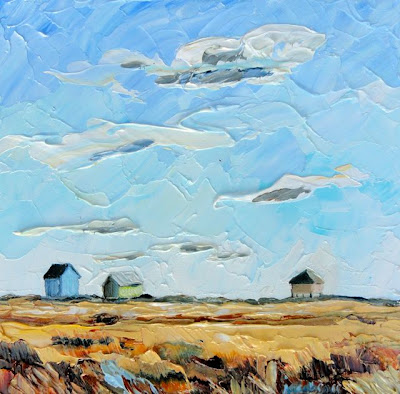 Edge of the Sound, Madison
sold

I hoped I would have the chance to paint on New Year's Day, but work took over, and so what has become a tradition got pushed off for 24 hours. Even though I was working on the Monday holiday, there was not much to do, so I had the chance to scour Madison and Clinton in the afternoon and paint, on a day of wind and sun and high wintry clouds.

If any of you are in the mid-Hudson Valley in New York, why don't you come to the Wallkill River School Gallery on Saturday? I'm part of a group show of represented painters, and will be demonstrating during the opening, along with everyone else.

It's a little chaotic, but it's a lot of fun, and it gives people the chance to see work by everyone who exhibits at the gallery throughout the year.

And in April, Shawn Dell Joyce and I will be doing a two-person show, "Dreaming in Color," at the gallery - so plan on coming!