Recovery... and Visiting an Old Friend 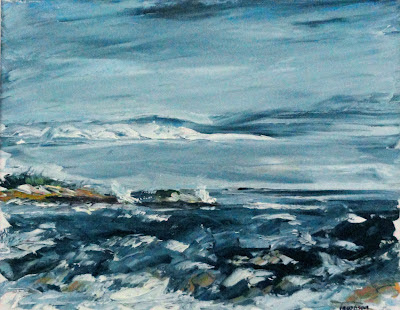 Waterford Beach
Oil on canvas, 16x20
please contact me for price and availability

For the past 11 days, I have been knocked absolutely flat by Lyme disease. It's been a nightmare, probably because I didn't catch it early enough. Thought I just had an odd red patch, probably from the seatbelt rubbing against my skin.

But several days of 103-degree-plus temperatures, bone-deep chills and pain throughout my body (frighteningly, sharpest in my hands and wrists) sent me to the doctor, who took one look and said "Lyme," and related tick-borne stuff.

So for the past week and a half, I've been doing nothing but sleeping, watching TV - and looking at this painting, which is on the wall of the living room.

I really hadn't realized what a cool painting it is! And that, I've noticed, is one of the hallmarks of my best paintings: They get better with time.

Familiarity should breed boredom, really, shouldn't it? I mean, you stare at the same painting day after day, and finally, don't you know all the strokes, all the colors, all the movement?

My best paintings seem to change over time, somehow. Deepen. Sharpen. Grow more interesting. And this, I've realized, is one of them. I don't know why it hasn't sold, and I've thought that maybe I should keep it, but I'm offering it up again, just to see.

It is an earlier painting, and while it is thick with paint and surface like my newer work, it is on a thinner canvas, and is framed. 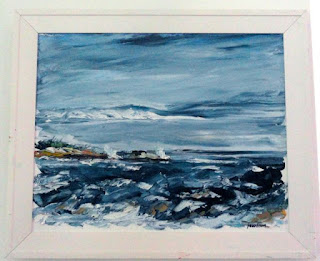 So sorry to hear how sick you were. Take it easy a bit longer and make sure you finish all your mess. Miss your emails.

Thanks, Debbie. I miss painting and writing, and the community of all of you and my little blog. I sure appreciate the note, and will indeed finish the medicine and, for once, do what I am told.

Thank you, Rayedee. What a lovely way of thinking about things.

And I am, indeed, feeling better. Finally!

It is a lovely painting, it cools me off. I think the white frame distracts from it, though. I never tire of seeing your artwork on my walls. I get lost in your paintings.

my original comment seems to have disappeared; if this is redundant, excuse me.

good idea about the frame, Sherry!