I was about half-way through this painting when I saw a truck driving slowly up the road you can see on the left-hand side of the canvas. I was set up in the road, and so I stopped to see if the driver was going to need me to move.

As the truck neared, kicking up dust, the driver took it off the roadway and veered around the billboard that was behind me. He stopped there, and he and his son got out to see the painting. He'd driven off the road, he said, so that he wouldn't get dust on my wet paint.

He and his red-haired son liked the piece a lot. Conway, the son, did think that maybe I should put a lake in over on the left-hand side of the canvas, and I admit I did consider it.

The dad said that he and Conway had come over to get some green beans.

I hemmed and hawed. He knew the guy who owns the fields and the crop, and he was going to harvest  it all the next day, so if I wanted some, I should take them now.

I thanked him, but said I couldn't. It just didn't feel right to take another person's crop, even if it was just a few beans. If everyone took just a few beans, well, soon enough, the farmer wouldn't have any.

The man went to his truck, and came back in a minute with a big bundle of bean plants, stems and leaves and dirt and all, and gave them to me. This, I could accept. They were taken with permission, and he was sharing, and it felt OK to me.

We cooked them up that night, and they might have been the best green beans I ever had! 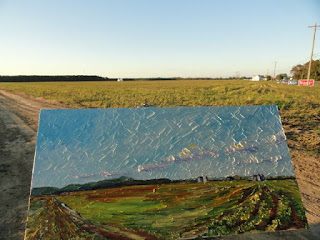 My painting in the green bean landscape
By carrie jacobson - October 25, 2012

Email ThisBlogThis!Share to TwitterShare to FacebookShare to Pinterest
Labels: book