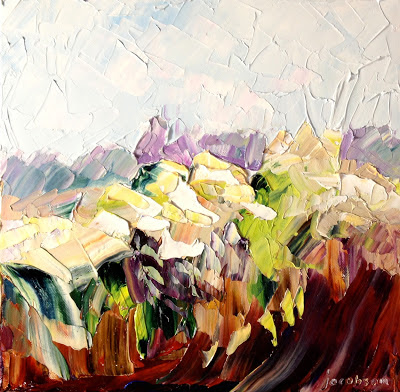 Field of Flowers
Oil on canvas, 12x12
Please click here to email me for price and delivery information

I'm taking this opportunity, at the start of 2013, to tell some of my story here on the blog. Many of you have suggested that I write a book, and in these blog posts, I'm hoping to work out pieces that could become that book.

I grew up in New London, CT. Peter grew up in Ashaway, RI. After three life-altering events  in 2006-2007, Peter and I decided to move from our home in New York back to the area that, at that point, we called home.

So I searched and searched and finally found a job as editor of a paper in Rhode Island. We bought a house in Ledyard, packed up seven dogs, four cats and an inordinate amount of stuff and moved.

My job was had been eliminated in April 2007; I was hired in August. That's four months. Never in my two decades in newspapers had I thought I'd have to look for four months before I found a job. In the past, once I decided it was time to move on, I usually had an interview in three days, and a job offer a week or so later - if it even took that long.

Now, I realize, four months was nothing. Friends of mine whose newspaper jobs were eliminated after mine have spent years looking for a job. But at the time, it felt like an eternity.

And in that eternity, it felt like my life was over.

To this day, there's little in life that makes me happier than standing in a gorgeous landscape, feeling the sun (or wind or snow) on my face, smelling the air and working to capture all of that on canvas.

And I began to get glimpses of a better future.

Flowers in January! Who'd a thought? The painting is absolutely luscious.

Though I know much of your story as to how you came to paint, I still enjoy re-living it with you here.

I've been quiet lately - so many tasks to catch up on, and what with returning to work - no time to blog. My resolution? GET BACK ON THE WAGON! I find I need my blog outlet for balance.


I've come to realize over the years that while painting in and of itself is a great motivator, the blog is an ongoing discipline that is a major spark in my life. If I am determined to do a blog entry, it means I have to have a painting, and I have to have a thought. Something to write about. So for me, it works.