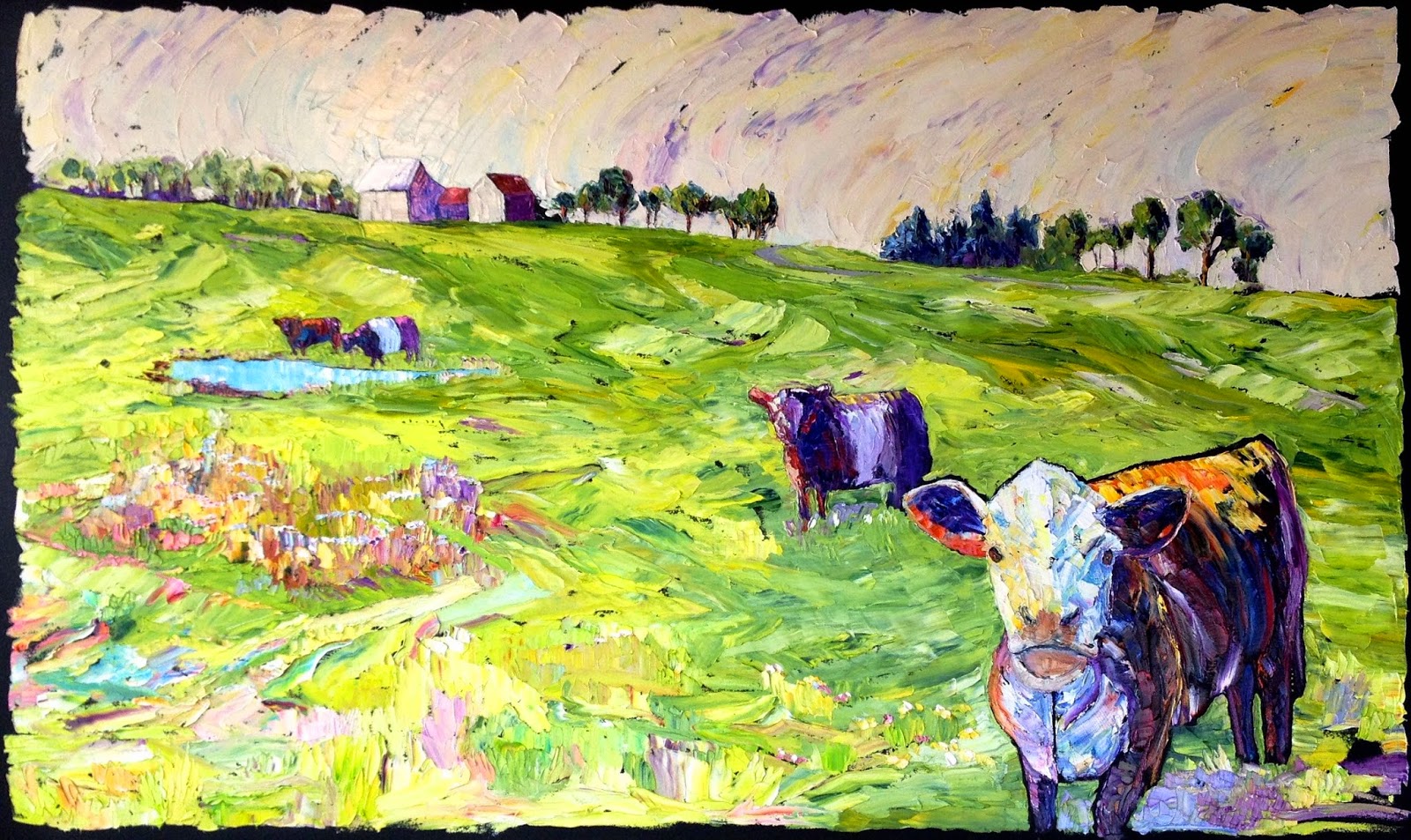 I think this painting is one of my best cowscapes ever. I love the expression I saw and caught on the cow right in the front. I like the barns a lot, and the trees along the ridgeline, too. The white-gray sky seems to work in this painting, and I like the rich, undulating field, too - in spite of last summer's dismay with such green blocks.

***
THE FIRST BIG SHOW that accepted me was Paradise City, in Northampton, MA. (Here's my first booth) I'd gone to the show for years, and had applied thinking that I'd never, ever get in. The work in the Paradise City shows is about the best of any of the shows I've been in. I'd go, and ooh and ahh, and maybe sometimes buy something - and always, always, be motivated and inspired.

When I got the notice that I had been accepted, I was just stunned. Honestly, I thought someone had made a mistake. I think that that acceptance is the single most confidence-building event in my painting life.

When I left Patch.com, and journalism, to paint full-time, my first show was Paradise City. We were living in Connecticut, and I had packed the van and was ready to go when my brother called. The Hartford Courant's entertainment magazine had Paradise City on the cover, and the entire cover, the first day after I left the safe world of corporate employment, was a painting by me.

Paradise City has continued to generate magic for me. I just returned from Pendleton, SC, where I had a good time and met fine people, but had very low sales. This is the third low-sale show in a row, and I was feeling deflated and confused. Then, Anne Pinkerton from Paradise City reached out and told me she was doing a piece on me for the show's online magazine.  It's a fine piece, and it really brings me and my art to life - and, in the moment, helps me feel that the low sales have nothing to do with me or my painting. Click here to read it!

The Paradise City show is May 23-25, at the Three County Fairgrounds in Northampton, MA. I'll be in Booth No. 415, in the Morgan Barn. Click here for coupons for discounts on the entry fee. 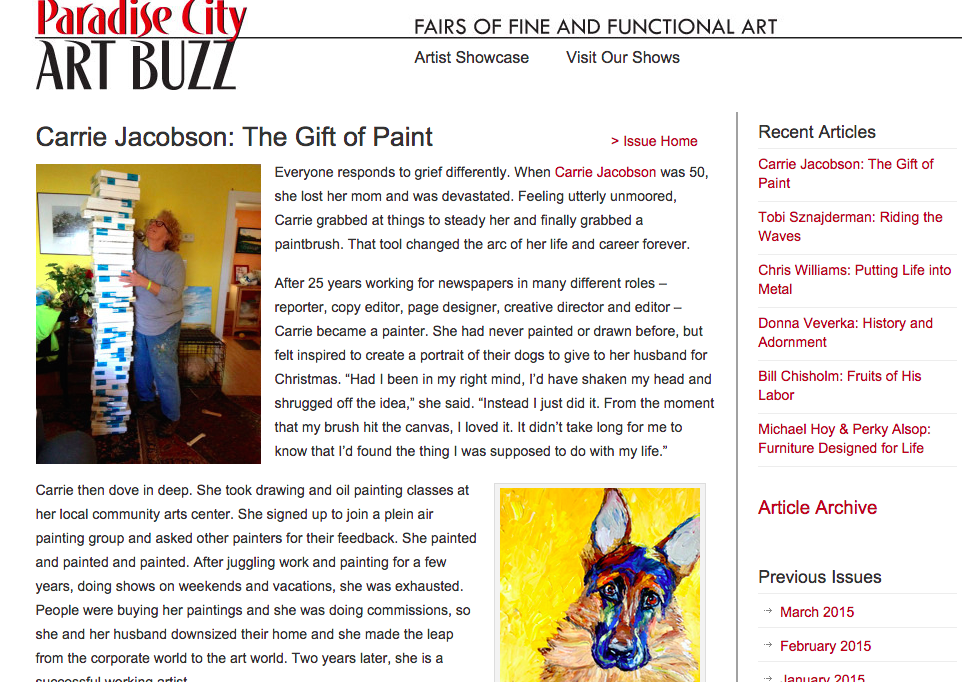 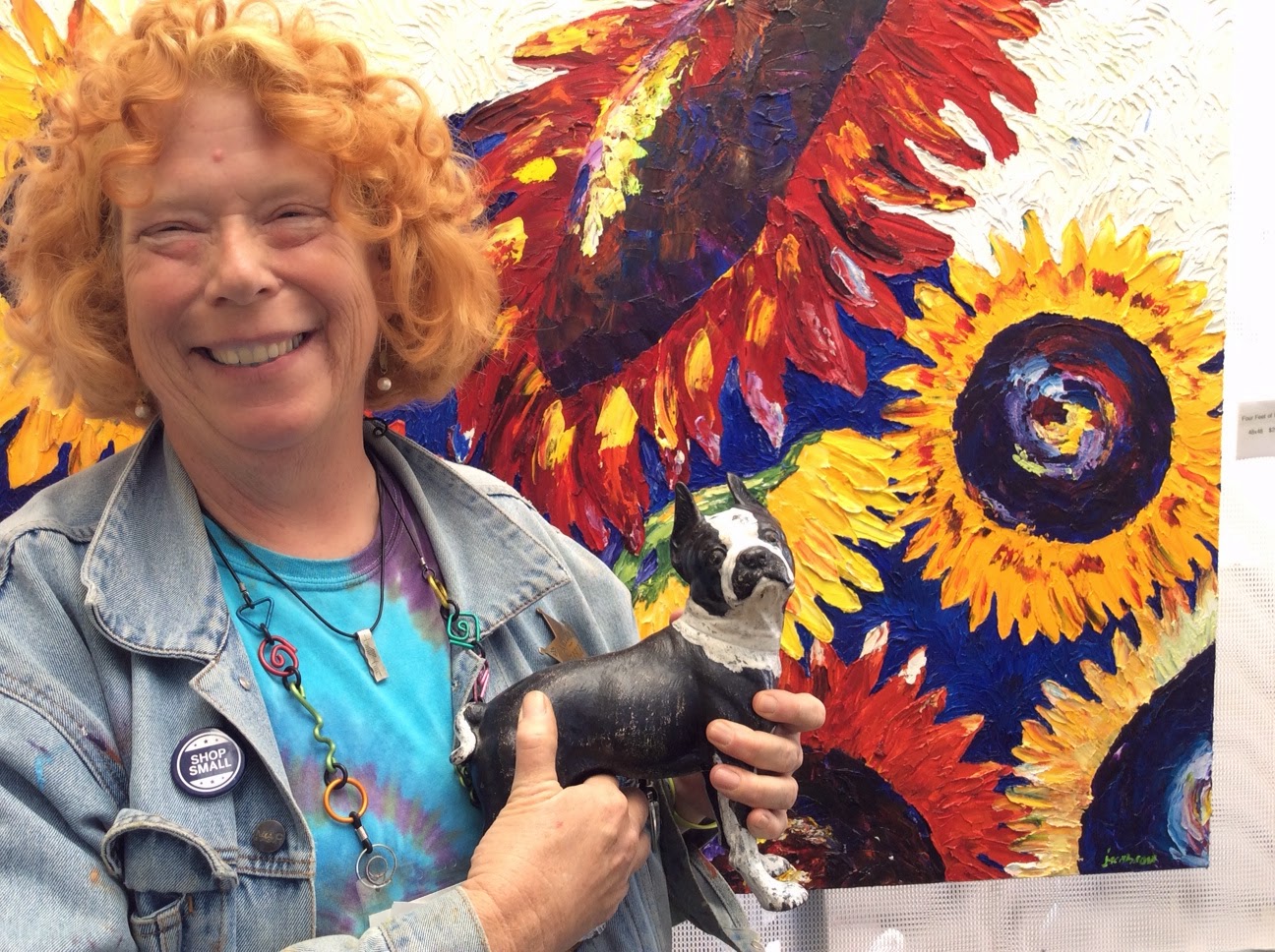 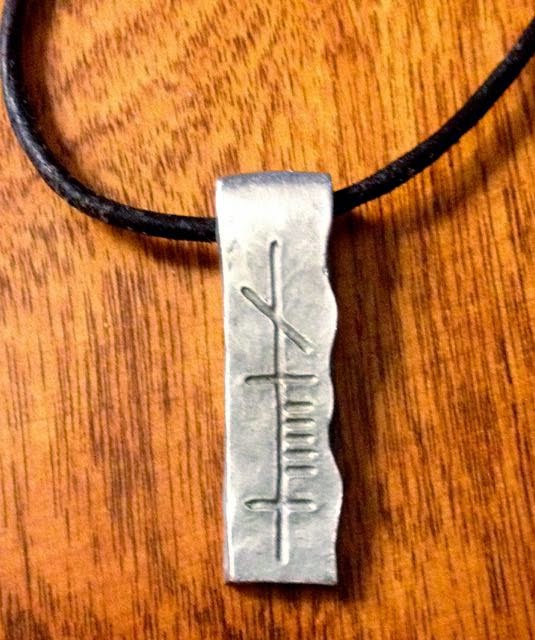 Stormy, a very interesting woman, came into my booth in Pendleton, SC, on the second day of the show. She was clearly a free spirit, and entertained me with stories of her adventurous and eccentric life. She was wearing a great cross necklace, with a Russian Orthodox cross scratched into a block of metal. I really loved it, and traded her a small acrylic painting for it. She asked, then, if she could take a photo of me with Buster, her Boston terrier. I looked around for a dog.... She put her purse down on the ground, reached in and pulled out Buster! He is cast iron, and weighs a ton (she said 9 pounds but he felt heavier than that). She takes photos of him all over the place. So today, Buster is the Dog of the Day!

Did you coin the word "cowscape"?

Congratulations on a fantastic feature article.!!

And don't be discouraged by slow sales here in the South. I'm told the entire Southeast is a few years behind the current economic recovery. Your work continues to develop beautifully and it's good to see you smiling!

What a wonderful article Carrie! You have had such great success...it's marvelous that you found something you absolutely love to do...and you are so good at it!
Your post gave me a good laugh. When I read the title, my brain read it as "To Paris" instead of "Two Pairs"...then I saw the cow painting (which I love!)...had to read the title again to understand the connection between Paris and cows. My brain unscrambled the letters and it all made sense. My laugh for the day :)

Thank you, Patrice! The story IS wonderful, isn't it, and helps remind me how far I've come, and how blessed I am. You know how it is to go through a time of new work and low sales, and how the combination makes you question yourself, your direction, everything. The story cheered me, helped me remember some things and get a feeling about the true direction I'm going, and that I need to go. How great - again, how blessed I am - that that article came along when it did. Like so much else in life.

Ah, if only it was To Paris! Maybe I should make a cow painting with La Tour Eiffel in the background. Actually, that would be a riot. I think I'll try a small one.

Thanks so much for the note, Sara. I have had great success - and I am grateful every day. But still, this piece could not have come at a better time. Three low-sales shows in a row prompt many questions from me about my painting, the direction I'm going, all that stuff. I'm sure you ask yourself the same questions when the photography doesn't sell. So the piece came at a good time, re-energizing me, helping me see my direction more clearly, shutting my brain up a little, and making me remember some stuff I'd forgotten.

Wonderful! Really enjoyed the Paradise City article, and the video it linked to. Your exuberance is a delight! Have a fantastic time up in Northampton - hope it's a lively show that connects you with lots of great folks (and dogs)!

Thanks, Ellen! I was so happy with that story, and all the connections it made. I am blessed, indeed.