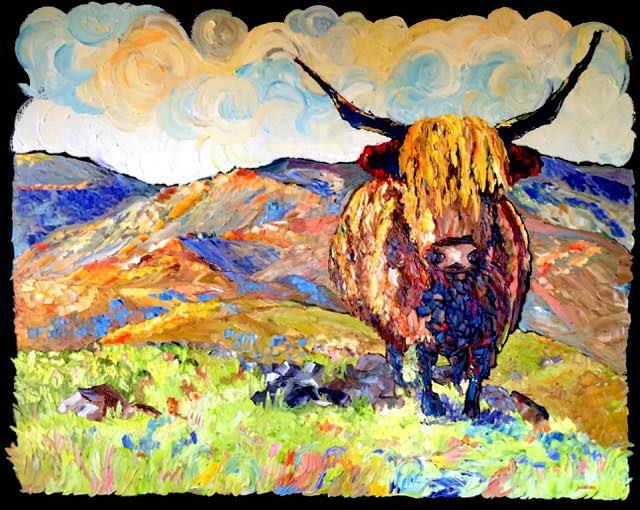 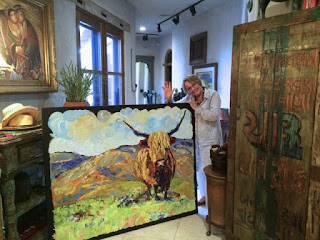 I've been painting a lot, and traveling a lot, but I haven't been posting to my blog as much as I'd like to this year. So I'm going to post a couple paintings each post here until I catch up. Some of these have sold, but I think that many of you just like looking at the paintings, and reading about them - please let me know if I'm wrong! Sean was a big, big painting, and I really enjoyed painting him. When you're painting with a palette knife, it's really fun to paint hairy animals. It's a natural, a great fit of tool and purpose.
Sean went to a woman with an utterly amazing home in Tubac, Arizona, where my dad and stepmother live. The buyer has brought items from around the world - and throughout the centuries - to decorate her home. I'm honored that Sean is in such company. 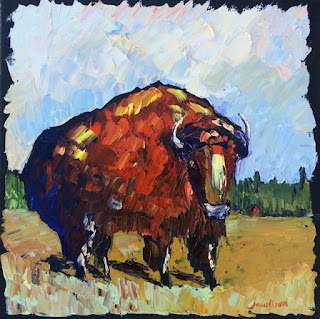 20x20, oil on black canvas
Please click here to email me for price and availability

I made Bill for someone who said she might want a buffalo painting... and then never came to the show for which I'd made the painting. But it's OK. Many people have asked for buffalo paintings, and it was fun to do, and I am sure Bill will make his way into someone's home. 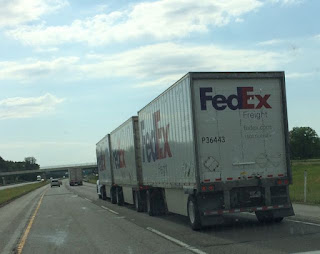 A friend whose husband drives trucks with three trailers (they're called "triples") says that they have "the best safety record of any group on the highway, including law enforcement." There are lots of rules governing triples, she tells me. They can't drive in snow, wind or fog. You can't back them up! And some states prohibit them. So, interesting. Guess I don't need to be so nervous when I'm passing one.
***
Dog of the Day 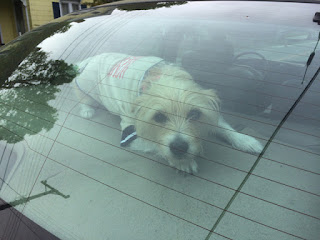 Saw this guy at the post office in Wachapreague. He started barking like crazy, of course, when I got close to the car - which was running, with the A/C on, I am happy to report.

"Even in literature and art, no man who bothers about originality will ever be original; whereas if you simply try to tell the truth (without caring twopence how often it has been told before) ou will, nine times out of ten, become original without ever having noticed it."