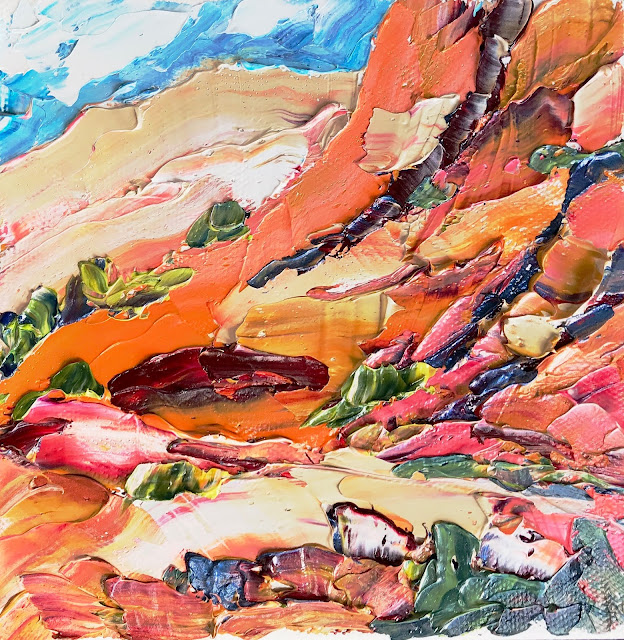 This is a formation that absolutely fascinates me, and which I will probably paint again, in spite of the fact that I have made two paintings of it already. I love the sweep and curve of the rocks, the tension of fluidity and stasis - and the amazing colors, on top of it all. 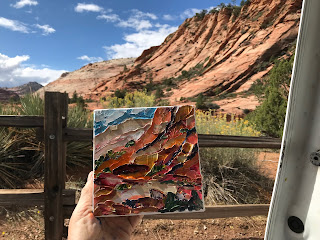 Zion National Park, which was where I was painting, seems to sort itself into two parts - one from the Kanab, Utah-side entrance to the big tunnel in the middle, and the other, from the tunnel to Springdale. The first part is filled with close-knit rock formations, patterned with stripes and swirls, layers of rock carved by wind and water and the passing of centuries.

The second part of the park, with the Springdale terminus, seems to be more monumental, with incredibly huge cliffs, rock faces and formations towering hundreds, if not thousands, of feet above the roads. There is a third section, but you had to take a shuttle to see it, and I just didn't have the time.


I liked the first part far better than the second, though both amazed me, both stunned my eyes, both left me speechless and in awe.

My paintings from Utah are all for sale - and I will continue to post them as I go. They're cheaper if you buy them while I am traveling! I hope to start painting again Monday, when the snow stops falling and the roads are no longer icy (more on this, next posting). You can find the paintings by clicking here to reach the Utah Painting Trip page of the Jacobson Arts website!

MUCH TO MY surprise and disappointment, when I checked the hotels in Kanab, the town closest to Zion National Park, they were mostly full - and all, expensive.

Then I found the Cowboy Bunkhouse, which proclaims itself a Western hostel. Rooms go from $35 to $75 a night, depending on number of beds and whether there's an en-suite bathroom, toilet or nothing. Showers are shared, for the most part. Two kitchens are also shared.

The price was right, and I've happily stayed in hostels before, so I thought I'd try it.

The building started as a hospital, and then later was expanded to become a school for kids who needed an alternative to regular school. I admit, I was a little skeptical when I pulled up, but as soon as I went inside, I was charmed.

The place was clean and neat and very fun. The cowboy theme is everywhere - but in this place, the regular cowboy is celebrated, more than the movie-star cowboys whose many films were made in and around Kanab. Rooms are named after towns where the cattle trails and railroads met, or  after real-life cowboys or cowgirls.

I stayed in the Connie Douglas room, and I admit I'd never heard her name! She was thought to be America's oldest cowgirl, and led an interesting life. You can find out more about her here.

I ended up spending three nights at the Cowboy Bunkhouse, and I recommend it highly. Most of the people staying there were Europeans - and all the people on the work-barter program there were, too. The others, generally, were senior citizens. Interesting. 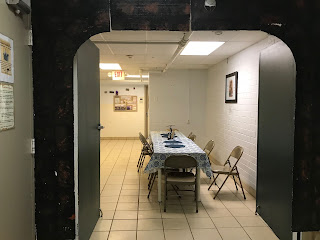 The staffers eat dinner together at the Bunkhouse, above.
Below, one of the hallways, with cowboy-life decorations. 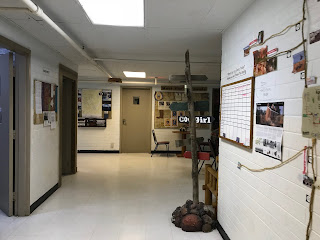 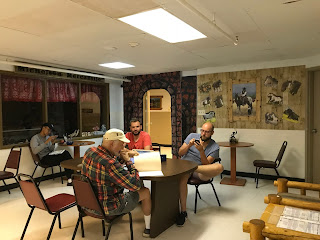 Above, some of the guests at the Bunkhouse.
Below, the woman who owns and runs it, with her husband. 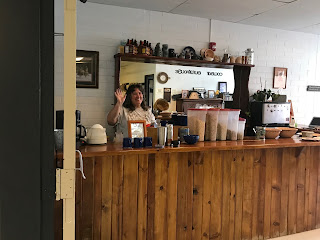 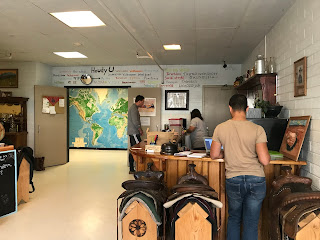 Above, the tail end of breakfast, which comes with the room.
Below, the building has that 1960s institutional look. 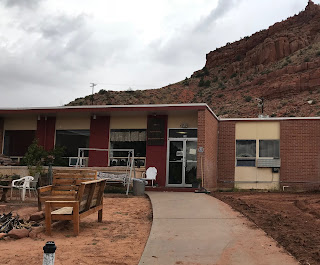 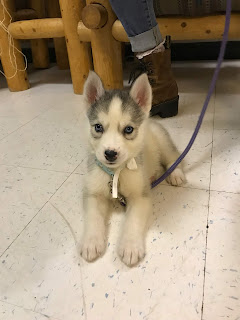 Zara was staying at the Cowboy Bunkhouse! She's a two-month-old husky, who raced around, playing, biting fingers, greeting everyone - and then, wham, collapsed into puppy exhaustion. 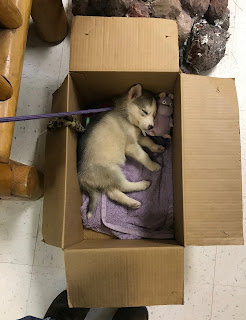 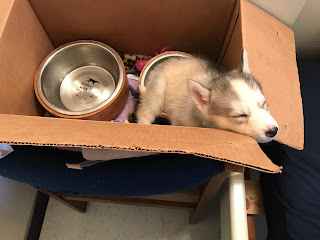 "Don't let yesterday take up too much of today."