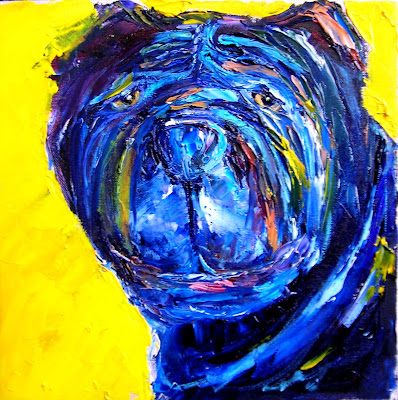 I had had five commissions, and was cooking along with them when, last week, a man walked into the gallery and asked if I could paint his five dogs in time for Christmas. The gallery owner called, and I said sure, I could paint them, but they'd never dry in time.

No problem, he said.

So I finished the last of the first batch and began.

I have to say, I was more than a little scared. I had one shot to do all five dogs, and my confidence had been a little shaken when, recently, a commission had been rejected. But the painting gods were with me, and I soared.

This sharpei was not one of that group of five. I will post these in the order I received them, saving the group of five for last.

So as my grandmother used to say, one door closes and another one opens.