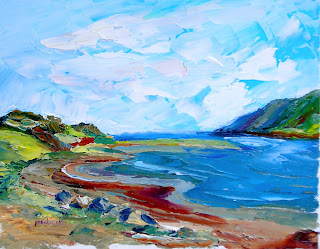 
Call me at 860-442-0246 or email me
if you are interested in buying this painting
Driving north from Margaree Harbor, along the coast of the Gulf of St. Lawrence, Heather and I saw beautiful scenery, small hills with houses set prettily on top of them. The ocean rolled to our left, making the air smell of salt, and filling the sky with a clean, soft light.

Then, soon after we saw a sign telling us we were entering the Acadian region of Cape Breton, we saw what might have been the strangest sight of the entire trip. In a field by the side of the road, near a little trailer and a shed, stood a circle of strange, almost frightening scarecrows.

I turned the car around and we drove up. Here is what we saw. Click on the photo to enlarge it! 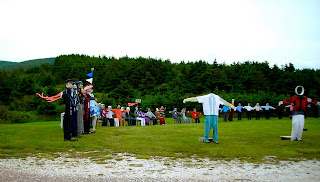 Scarecrows, dozens of them, wearing masks and dressed mostly in clothing of trades, stood, arms outstretched, in a giant circle. Most of them had pieces of paper pinned to their breasts, papers that, on closer inspection, told odd little tales about whom they represented. 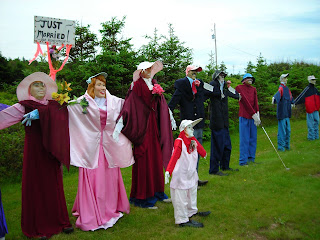 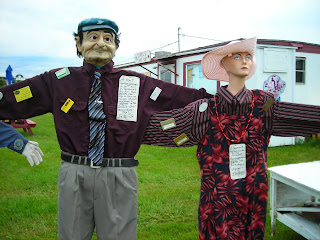 You might be able to read the signs if you click on them; I can't, but on a bigger screen and with better eyes...

Joe's Scarecrows, as they are known, were created by the late Joe Delaney. He started this odd project innocently enough, surrounding his vegetable garden with scarecrows. By the time he had eight scarecrows, people had begun to stop to see them.

According to an article displayed on a table at the site, Joe's Scarecrows now number 38. They attract 8,000 visitors a year (!) and have become one of the top tourist sites in the area.

The display is free, and there are donation boxes, along with boxes where you can (and are encouraged to) leave comments and tell where you're from. There's a gift shop, which I was keen to see, but it wasn't open.

The article said that many of the masks are like masks used in Mi-Careme, which occurs halfway through Lent. To break the monotony of the 40 days of deprivation, people took to making masks and visiting neighbors, while trying to keep their identities secret. You can read more about Mi-Careme, and about the village of Cheticamp, at the Cheticamp website (http://cheticampns.com/).

Before we left, we took photos of us with the scarecrows. Here's Heather: 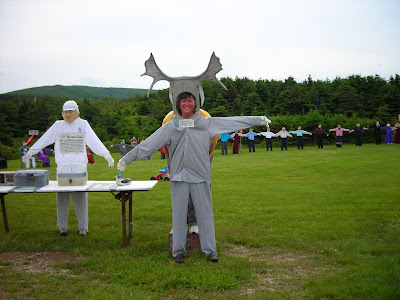 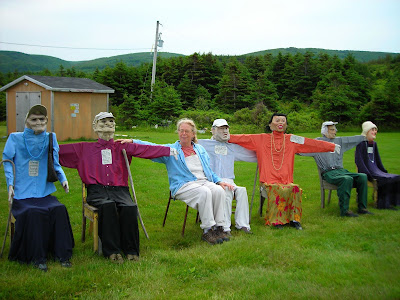 Across the inlet from Cheticamp is a spit of land with a few houses on it. Most of the land is a communal pasture, according to signs we saw. I liked the way the bank curved and the water washed in along it, and I liked the way the mountains faded in the distance.

While I painted, Heather explored the little beach and picked up rocks and shells. One car passed us. On the way out, I saw this house for sale. I am still working on Peter, hoping he might like to move. 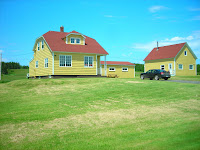