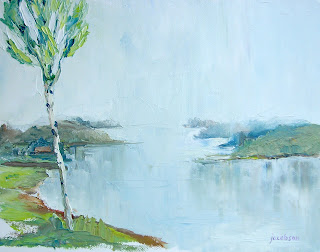 The Fog Is Rising
Mabou, Cape Breton, Nova Scotia
By Carrie Jacobson
Oil on canvas, 11x14
Call me at 860-442-0246 or email me
if you are interested in buying this painting 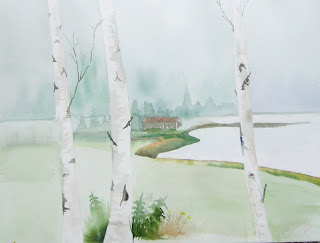 Misty Morning
Mabou, Cape Breton, Nova Scotia
By Heather MacLeod
Watercolor on Arches paper, 12x16
We arrived in Cape Breton late in the afternoon, and got off the main road in a small town called Port Hood, on the western edge of the island. The day had been gray and showery, and as we drove along the harbor, the setting sun broke through the clouds, sending rays earthward in what I've always called "God skies."

On the gray surface of the water, the rays made bright patches, like spotlights. 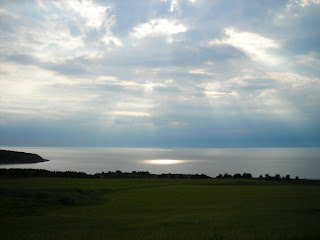 I did not mess with this photo at all. That's just how the scene looked from the car. I've never seen anything like it.
Looking for more of this, we turned onto West Mabou Road, a dirt road, and drove up into the hills. There, we saw the most spectacular scenery - fields running to the edges of the dark red cliffs, houses nestled in tight against trees and hillsides, overlooking the bay and the sky and the sunset.
And so, we said we would paint there, right there on that road, in the morning.
That night, it poured, and in the morning, fog blurred out the views. Each time we thought it was lifting, it came back down again, a curtain of white, obscuring magnificence.
But we found a place with shelter, and we painted, and when, finally, the fog covered everything, we used our memories and imaginations to finish our paintings. We spent the day exploring the countryside near Mabou, and the next day, painted where we'd planned.
By carrie jacobson - July 01, 2010